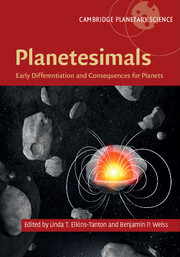 from Part Four - Early Differentiation and Consequences for Planet Formation