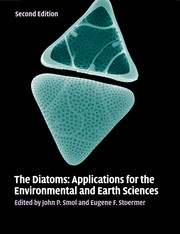 from Part III - Diatoms as indicators in Arctic, Antarctic, and alpine lacustrine environments