from The Philosophical Doctrine of Religion Part One

from On the Miscarriage of All Philosophical Trials in Theodicy 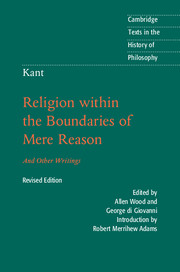 from The End of All Things

from The Philosophical Doctrine of Religion Part Two

from What Does It Mean to Orient Oneself in Thinking?

from Religion within the Boundaries of Mere Reason