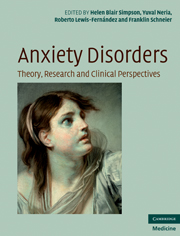 from Section 4 - Treatment of anxiety: current status and controversial issues

from Section 4 - Treatment of anxiety: current status and controversial issues