from Part I - Jurisdictions That Have Adopted the Model Law: Implementation and Comparisons 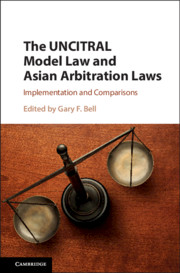