from Part II - Methods for studying captive and wild cheirogaleids 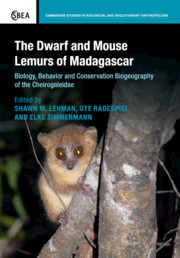