from Part IV - Political Liberalism and the Legal Complex 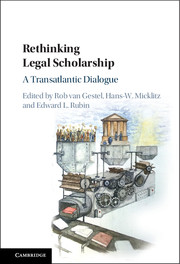 from Part II - Should Doctrinal Legal Scholarship Be Abandoned?