from Part III - Schadenfreude as an intergroup phenomenon

from Part I - Beyond prejudice 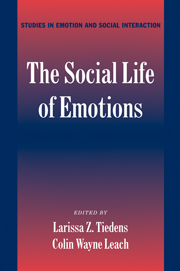