from III - Social Geography from a Global Perspective

from IV - Social Geography in the Indian Context

from IV - Social Geography in the Indian Context 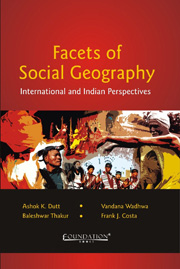