The Soft Drinks Case: The WTO and Regional Agreements* 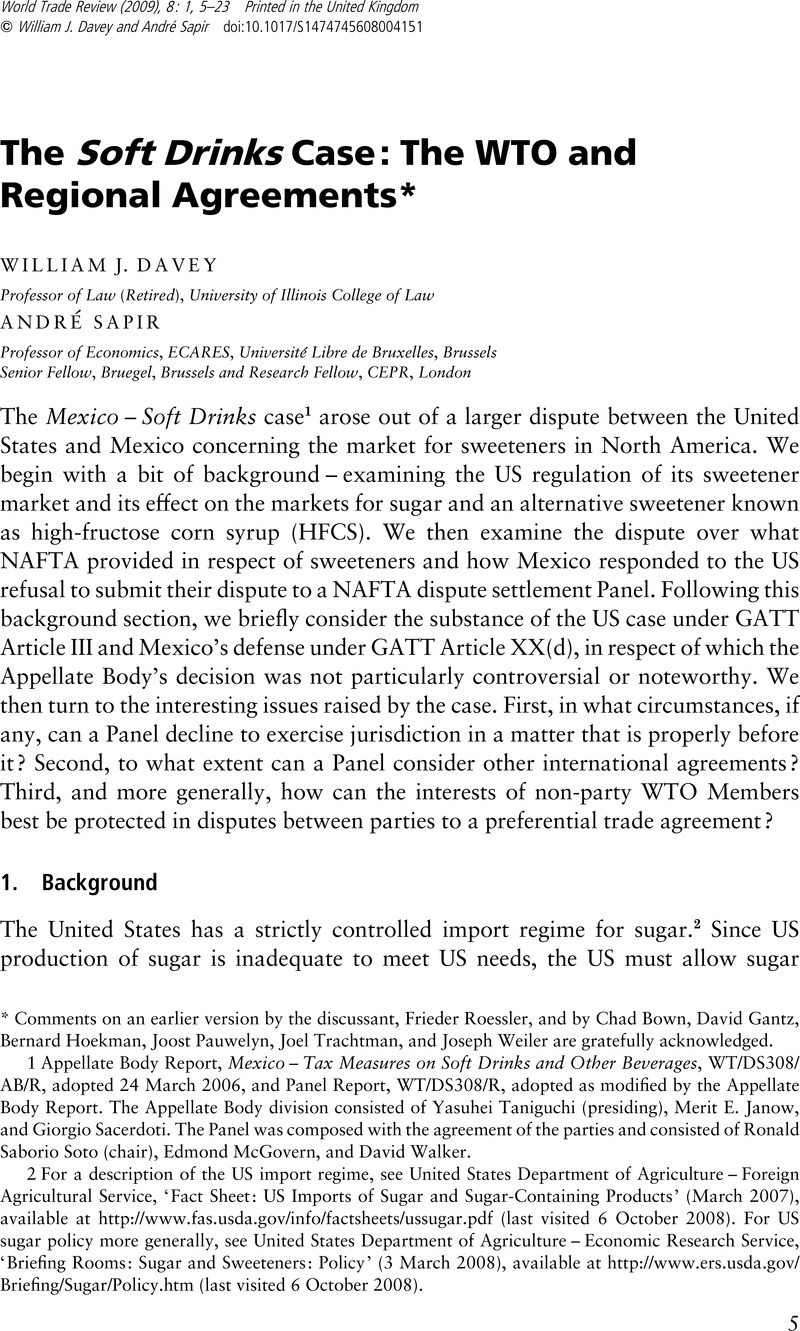 3 The Mexican version of the background to the dispute is taken from the Panel report, paras. 4.77–4.97.

5 One of the problems of the GATT dispute settlement system was that it could be blocked if the disputing parties did not agree on the composition of the Panel (i.e. on the identity of the panelists). The WTO solves this problem by providing that the WTO Director-General can appoint the members of a Panel if the parties cannot agree. NAFTA attempted to solve this problem by providing for a 30-person roster of panelists – with ten from each party. NAFTA, art. 2009. Under NAFTA article 2011, five-person Panels are to be composed as follows: the chair is to be agreed upon and each party is to select two panelists who are from the other party (normally from the roster since anyone else would be subject to preemptory challenge). If the chair is not agreed upon, then the party chosen by lot is to select the chair. If a party does not select its panelists, they are to be chosen by lot from the roster. The roster has never been formally established.

6 For a description of the evolution of this dispute, see William J. Davey, ‘Implementation of the Results of WTO Trade Remedy Cases’, in The WTO Trade Remedy System: East Asian Perspectives (Mitsuo Matsushita, Dukgeun Ahn, and Tain-Jy Chen eds., London: Cameron May 2006), pp. 33, 51–52.

8 The measure is described more precisely in the Panel report, at paras. 2.1–2.6.

9 The effect of the tax was felt almost exclusively by the United States, although the tax did not discriminate explicitly on the basis of origin. Mexico is a very minor producer of HFCS (1% of world production in 2004), while the US is the overwhelmingly dominant producer (71% of world production) and had preferential access to the Mexican market under NAFTA. Paul Bratley, ‘The Ups and Downs of Corn Sweeteners’, International Sweetener Colloquium, Tucson, Arizona, 7 February 2005 (available at http://www.idfa.org/meetings/presentations/paul_bratley_presentation.ppt#427,4,2004 HFCS Production by Country (last visited 6 October 2008)).

11 The text of the so-called Sweeteners Agreement with Mexico can be found at http://www.ustr.gov/assets/Trade_Agreements/Regional/NAFTA/asset_upload_file694_10810.pdf (last visited 6 October 2008). The HFCS-sugar dispute between the US and Mexico is described in general in Gary Clyde Hufbauer and Jeffrey J. Schott, NAFTA Revisited: Achievements and Challenges, pp. 243–245 (Institute of International Economics 2005). The settlement did not resolve several NAFTA Chapter 11 (Investment) disputes brought by US HFCS makers against Mexico. Reportedly, a Panel in one of those cases has found that Mexico is liable for a violation of the national-treatment provision of Chapter 11, but has not yet set the amount of liability. See Corn Products International's 2008 Form 10-K filing, item 3, available at http://sec.edgar-online.com/2008/02/29/0000950137-08-003051/Section10.asp (last visited 6 October 2008).

22 Appellate Body Report, para. 68. Although its determination of the scope of the terms ‘laws or regulations’ effectively disposed of Mexico's Article XX(d) defense, the Appellate Body also discussed the meaning of the phrase ‘to secure compliance’. In that regard, it noted that while it has said that the contribution that a measure makes to securing compliance is a factor to be weighed in deciding whether it is necessary under Article XX(d), that does not mean that a measure has to guarantee that compliance will occur as suggested by the Panel or that it has to be coercive. In the Appellate Body's view, the issue is the extent to which ‘the design of the measure contribute[s]’ to securing compliance. Appellate Body Report, para. 74.

25 It found support for this conclusion in the fact that the measures given as examples in Article XX(d) included only domestic measures. Appellate Body Report, para. 70. Since the examples are not exclusive, they do not themselves rule out the inclusion of international obligations within the scope of the terms.

30 In the New Shorter Oxford English Dictionary (1993), the first meaning of ‘law’ refers to ‘[t]he body of rules … which a particular State or community recognizes’. The term ‘community’ could obviously be used in an international context, e.g. the community of nations, but it is probably more commonly used to refer to a more localized entity.

31 Marceau notes that this reading of Article XX(d) should not limit the ability of WTO Members to take environmental measures, which are more the province of subparagraphs (b) and (g) of Article XX, but that interpreting XX(d) so as to permit general countermeasures to enforce other agreements would go too far. Gabrielle Marceau, ‘The Scope of the Article XX(d) Exception for Implementing MEAs Domestically and for Policing Compliance of International Environmental Laws by Other Members after the Soft Drinks Dispute’ (2006), available at http://www.ictsd.org/dlogue/2006-05-30/dialogue_materials/Gabrielle_Marceau_speaker_notes.pdf (last visited 4 June 2008).

46 NAFTA article 2005.6 provides, subject to narrow exceptions, that ‘[o]nce dispute settlement procedures have been initiated under [NAFTA] or … under the GATT, the forum selected shall be used to the exclusion of the other’. See also text accompanying notes 35–37, supra.

48 Black's Law Dictionary, 1336–1337 (8th edn, 2004) defines ‘res judicata’ as ‘1. An issue that has been definitively settled by judicial decision. 2. An affirmative defense barring the same parties from litigating a second lawsuit on the same claim, or any other claim arising from the same transaction or series of transactions and that could have been – but was not – raised in the first suit. The three essential elements are (1) an earlier decision on the issue, (2) a final judgment on the merits, and (3) the involvement of the same parties, or parties in privity with the original parties.’ See also American Law Institute, Restatement Second, Judgments §§ 17, 24, 25, 26 (1982).

49 The Appellate Body has ruled that a claim rejected in the original Panel proceeding because a prima facie case had not been established may not be raised in a subsequent DSU article 21.5 proceeding, although a claim not considered for reasons of judicial economy could be raised. The Appellate Body relied on the principle of finality. EC–Bed Linen (Article 21.5 – India), WT/DS141/AB/RW, paras. 78–100. It also referred by analogy to DSU article 17.14, which requires parties to accept Appellate Body reports unconditionally.

51 This point is made by the EC Court of Justice in European Economic Area, Opinion 1/91, [1991] ECR I-6084 (suggesting identical provisions in the EC and EEA treaties might be interpreted differently because of the different degree of economic integration contemplated by the two treaties). A similar situation would arguably arise in all cases involving the WTO agreement and some other international agreement.

52 Accord, Joost Pauwelyn, Editorial Comment: ‘Adding Sweeteners to Softwood Lumber: The WTO-NAFTA “Spaghetti Bowl” is Cooking’, 9 JIEL 197, 200–201 (2006). Brownlie also makes this point in respect of municipal and international proceedings, noting, inter alia, that the ‘issues will have a very different aspect’. Ian Brownlie, Principles of International Law (Oxford: Oxford University Press, 5th edn, 1998), pp. 52–53. An analogy could be drawn to federal-court systems where it may sometimes be the case that, for example, a state court could not entertain a federal claim and vice versa. In such a situation, res judicata may not apply. American Law Institute, Restatement Second, Judgments § 26(1)(c) and Comment c (1982). See also, ibid., § 25, Comment e.

53 This does not necessarily imply that the results of a non-WTO dispute settlement proceeding should not be considered and given appropriate weight by WTO Panels and the Appellate Body.

56 Pauwelyn argues for coordination, but is unclear how it can be achieved. Pauwelyn, supra note 52, at 201–202; Joost Pauwelyn, ‘Choice of Jurisdiction: WTO and Regional Dispute Settlement Mechanisms: Challenges, Options and Opportunities’ (2006), available at http://www.ictsd.org/dlogue/2006-05-30/dialogue_materials/Joost_Pauwelyn_speaker_notes.pdf (last visited 4 June 2008).

58 See generally Marion Panizzon, Good Faith in the Jurisprudence of the WTO (Oxford and Portland, OR: Hart Publishing 2006).

59 See, e.g., Vienna Convention on the Law of Treaties, art. 31.3(c) (context shall comprise any relevant rules of international law applicable in the relations between the parties). Pauwelyn argues that this provision is not really that useful since the phrase ‘the parties’ means all the parties, which will not be the case when regional trade agreements are at issue. Pauwelyn, supra note 56. He would instead argue that in the process of determining the applicable law, the Panel would conclude that the explicit agreement between the parties should be given effect. Ibid.

60 In this regard, the ILC Conclusions, supra note 55, are noteworthy. They state that when States enter into a treaty that may conflict with other treaties, they should try to settle the relationship issue, but that they cannot affect third-party rights in doing so. Conclusion 30.

61 Pauwelyn criticizes such a result on the grounds that the result would (a) go against the sovereign will of the parties (but one of the parties could have agreed, perhaps in bad faith admittedly, on the assumption that a WTO Panel would not decline jurisdiction and that it could agree to the exclusivity clause knowing the only sanction would be that imposed under the FTA); (b) waste resources (basically true); and (c) result in unpredictability in trade relations because of potential conflicts (also possible). Pauwelyn, supra note 56.

67 The Appellate Body stated that it had ‘no alternative’ but to do as the Panel had done, i.e. ‘examine the provisions of the Lomé Convention ourselves in so far as necessary to interpret the Lomé Waiver’. Its examination of the meaning of the Convention covered several pages in its report. European Communities – Regime for the Importation, Sale and Distribution of Bananas, WT/DS27/AB/R, paras. 167–178, adopted 25 September 1997.

68 It should be noted that it is possible that a subsequent determination under the non-WTO agreement will be inconsistent with the decision in respect of that agreement made by the WTO body. That would be unfortunate, but such a possibility seems inevitable. It is similar to the situation in the United States where a federal court may have to interpret state law in the absence of state-court precedent. When it does so, it is always possible that a subsequent state-court decision on the issue may be inconsistent with the federal-court decision.

69 See also United States – Import Prohibition of Certain Shrimp and Shrimp-Containing Products, WT/DS58/AB/R, adopted 6 November 1998 (referring to other international agreements to assist in interpretation of GATT, at para. 168 – without any suggestion that it was definitively interpreting those agreements); United States – Standards for Reformulated and Conventional Gasoline, WT/DS2/AB/R, adopted 20 May 1996 (GATT not to be interpreted in ‘clinical isolation’ from public international law, at page 17).

77 Peter Drahos, ‘The Bilateral Web of Trade Dispute Settlement’, Paper for the workshop on ‘WTO Dispute Settlement and Developing Countries: Use, Implications, Strategies, Reforms’, University of Wisconsin at Madison, 20–21 May 2005.

78 With one exception, all the pre-2000 EC RTAs used a diplomatic, rather than a quasi-judicial, approach to dispute settlement. The option of having recourse to arbitration is normally available provided both parties agree. The EC–Mexico free-trade agreement marked the EC shift towards a quasi-judicial model of dispute adjudication. See Ignacio Garcia Bercero, ‘Dispute Settlement in European Union Free Trade Agreements: Lessons Learned?’, in Regional Trade Agreements and the WTO Legal System (Lorand Bartels and Federico Ortino eds., Oxford: Oxford University Press 2006).

81 Peter Drahos, ‘The Bilateral Web of Trade Dispute Settlement’, Paper for the workshop on ‘WTO Dispute Settlement and Developing Countries: Use, Implications, Strategies, Reforms’, University of Wisconsin at Madison, 20–21 May 2005, p. 11.

82 See, for instance, Peter Drahos, ‘The Bilateral Web of Trade Dispute Settlement’, Paper for the workshop on ‘WTO Dispute Settlement and Developing Countries: Use, Implications, Strategies, Reforms’, University of Wisconsin at Madison, 20–21 May 2005.

The Soft Drinks Case: The WTO and Regional Agreements*