The Problem of Perfect Fakes1 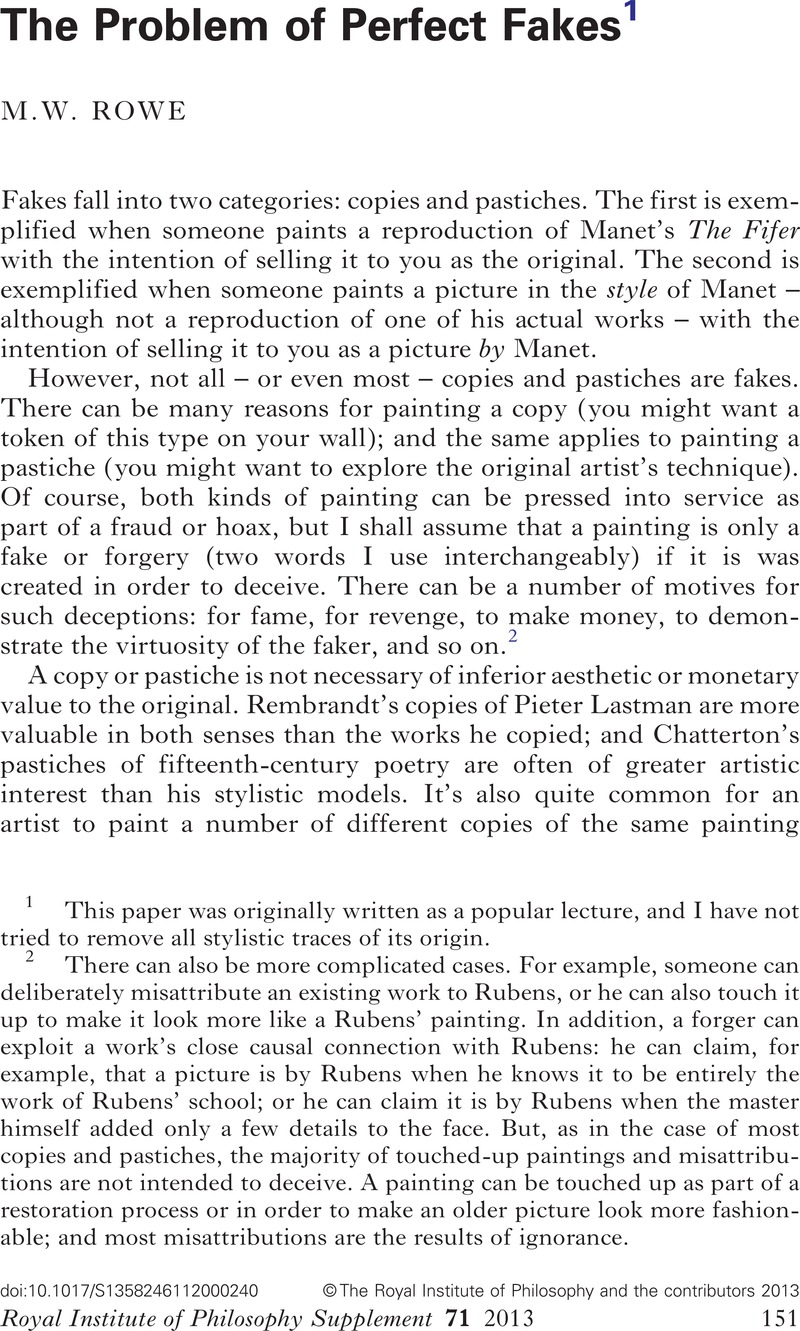 COPYRIGHT: © The Royal Institute of Philosophy and the contributors 2013

This paper was originally written as a popular lecture, and I have not tried to remove all stylistic traces of its origin.

This paper was originally written as a popular lecture, and I have not tried to remove all stylistic traces of its origin.

2 There can also be more complicated cases. For example, someone can deliberately misattribute an existing work to Rubens, or he can also touch it up to make it look more like a Rubens' painting. In addition, a forger can exploit a work's close causal connection with Rubens: he can claim, for example, that a picture is by Rubens when he knows it to be entirely the work of Rubens' school; or he can claim it is by Rubens when the master himself added only a few details to the face. But, as in the case of most copies and pastiches, the majority of touched-up paintings and misattributions are not intended to deceive. A painting can be touched up as part of a restoration process or in order to make an older picture look more fashionable; and most misattributions are the results of ignorance.

6 Lassman's modifications of Austen's texts usually make some allusion to her life or art. For example, Susan was a title for an early draft of Northanger Abbey, and ‘Alison Laydee’ is a play on Austen's nom de plume (if it can be called that) ‘A Lady.’

13 I am referring only to excellent fakes; clearly, an expert can be held accountable for overlooking a crude forgery.

16 For me, all works of art are types which are identified by their physical properties and the history of their production. But a type is different from what I here call a ‘manifest type’, which is just the actual or potential appearance of a work or several works. The phrase ‘potential appearance’ is designed to show my opposition to Goodman's theory as a complete account of fakes. He thinks that if an original and a fake look exactly alike, but we know that the copy is in some way different physically from the original, then this could lead to our eventually seeing that the original and the fake are not identical. This is why, according to Goodman, it is important to distinguish between originals and fakes, even though they currently look identical. (See Goodman, Nelson, Languages of Art: An Approach to a Theory of Symbols (Indianapolis: Hackett, 1976), 99–123). He does not consider a case where the original and the copy are molecule-for-molecule identical because this, for him, would mean that they actually are the same work of art. By contrast, I argue that there need be no actual or potential perceptual difference between two paintings for them to be different works; they need only have different histories.

18 It would be misleading to describe two such works of art as ‘copies’ – they might not be copied from originals, other works, or each other. ‘Counterparts,’ or Danto's term, ‘indiscernibles,’ might be better.

19 I would like to thank Karin Moses for bringing this example to my attention, and to Elisabeth Schellekens for confirming the translation.

20 I base this example on the famous seashore case in Knapp, Steven and Michaels, Walter Benn, ‘Against Theory,’ in Mitchell, W.J.T. (ed.), Against Theory: Literary Studies in the New Pragmatism (Chicago: University of Chicago Press, 1985), 11–30.

22 Most of these arguments are found in Goodman, Languages of Art, 1–43.

30 Austen, Jane, Northanger Abbey and Persuasion, ed., Davie, John, textual notes and bibliography by James Kinsley (Oxford: OUP, 1975), 16. In my quotations, I have left the names of Austen's heroine untouched. Readers who want completely to recreate the experience of Lassman's publishers' readers will need to substitute ‘Susan’ and ‘the Maldorns’ for ‘Catherine’ and ‘the Morelands’.

34 Northanger Abbey was probably written in 1798 or 1799 and it was sold to a publisher called Crosby in 1803 for £10. He did not publish the novel and was only willing to let Austen enter a contract with another publisher if she returned the money he had paid for it. Eventually, the novelist's brother, Henry, bought back the manuscript from Crosby in 1816, and it was finally published in 1818, a year after Austen's death. The relevance of this story to the topic of the present paper is how concerned Austen was by the delay: she clearly felt that the vogue for Gothic novels had waned, and that a book published after 1816 which satirizes a fashion of the late 1790s had missed its moment. She herself may well have contributed to the waning of this vogue. (Northanger Abbey, vii–xiv). Presumably, she would have felt even less sanguine about the commercial and artistic prospects of a work with the same manifest type published for the first time in 2007.

35 Kreisler does not imitate this particular innovation of Lanner's: the speed indication for Liebesleid is ‘Tempo di Ländler’.

39 I would like to thank Clive Ashwin, Stephen Everson, Marie McGinn, Anthony O'Hear, Catherine Osborne, Anthony Price, Beth Savickey, and audiences at UEA, the Welsh Philosophical Society, and the Royal Institute of Philosophy, for discussions of this paper.

1 This paper was originally written as a popular lecture, and I have not tried to remove all stylistic traces of its origin.

The Problem of Perfect Fakes1