Seven Decades of Radiocarbon Dating: Remembering the Pioneers & Looking Towards the Future Part 2 of 2 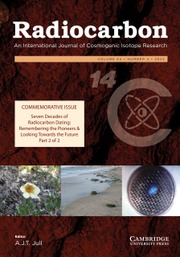