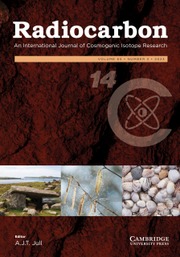 Replicate radiocarbon (14C) measurements of organic and inorganic control samples, with known Fraction Modern values in the range Fm = 0–1.5 and mass range 6 μg–2 mg carbon, are used to determine both the mass and radiocarbon content of the blank carbon introduced during sample processing and measurement in our laboratory. These data are used to model, separately for organic and inorganic samples, the blank contribution and subsequently “blank correct” measured unknowns in the mass range 25–100 μg. Data, formulas, and an assessment of the precision and accuracy of the blank correction are presented.

This is a work of the U.S. Government and is not subject to copyright protection in the United States.
Copyright
© 2019 by the Arizona Board of Regents on behalf of the University of Arizona

At the National Ocean Sciences AMS Laboratory (NOSAMS), the 14C concentration of a sample is determined by measuring its carbon isotope abundance ratio with accelerator mass spectrometry (AMS). The Fraction Modern (Fm) of a sample is determined by calculating the deviation of this ratio from that of normalizing standards. In our case, the primary standard is NBS Oxalic Acid I (NIST-SRM-4990) and Modern is defined as 95% of the radiocarbon concentration of NBS Oxalic Acid I normalized to δ13CVPDB = –19‰ (Olsson Reference Olsson and Olsson1970). Per convention, a correction is made to correct for isotopic fractionation. As such, sample results are corrected to a δ13CVPDB value of –25‰, assuming a quadratic mass fractionation dependency (Stuiver and Polach, Reference Stuiver and Polach1977). This correction is made using the AMS measured 13C/12C ratio values of the sample and normalizing standards.

At NOSAMS, inorganic samples (e.g., coral, foraminifera, mollusc, sediment [carbonate]) are typically acidified with 100% H3PO4, to convert the carbon in the sample to CO2. Organic samples (e.g., charcoal, plant/wood, sediment [organic]) are typically pretreated and then combusted at high temperature to produce CO2. Pretreatment of organic samples is usually a series of heated acid-base-acid leaches to remove inorganic carbon and base-soluble organic acids (Gagnon Reference Gagnon, McNichol, Donoghue, Stuart and von Reden2000). Regardless of sample type, converted CO2 is quantified and transferred to a reaction tube for reduction to carbon. Samples having a carbon mass of between 25 and 100 μg are typically reduced on a dedicated “small-sample line” having a reactor volume of 3.92 mL. However, samples as large as 1 mg can be reduced to graphite on this line. CO2 is reduced using Fe catalyst in the presence of excess hydrogen (Vogel Reference Vogel, Nelson and Southon1987). The majority of our “small samples” are analyzed on the CFAMS system (Roberts Reference Roberts, Burton, Elder, Longworth, McIntyre, von Reden, Han, Rosenheim, Jenkins, Galutschek and McNichol2010) because that system has a higher source-to-detector efficiency than our USAMS system.

For these secondary standards and blanks, our measured Fm values deviate from expected Fm values as demonstrated in Figure 1. This deviation is most pronounced for small mass samples (m < 100 μg) but is present for all sample masses and Fm values. This deviation can be explained by two processes: (1) a “large-mass” blank and (2) a “mass-balance” blank. In the following sections, we present the formulas we use to model these two blank types, details on how we determine the values of the blank contribution (separately for organic and inorganic samples), and subsequently “blank correct” measured unknowns.

The “large-mass” blank manifests itself most clearly for low Fm samples (see Figure 1, Panel B, “radiocarbon-free” sample). The large-mass blank can typically be explained by a combination of one or more of the following: sample pretreatment, carbon contamination in the Fe catalyst used in the reduction step, adsorption of atmospheric CO2 on to the graphite before it is put under the vacuum of the ion source, ion source memory, or background in the energy spectrum of the AMS 14C detector. The effect of the “large-mass” blank on the Fm of an unknown sample (Fmunknown) can be expressed as:

A “mass-balance” blank reflects the addition of a constant mass contaminant to the sample during sample processing/handling. The modelling of this blank can take the form of a contaminant with a certain mass and Fm (Brown Reference Brown and Southon1997; Hanke Reference Hanke, Wacker, Haghipour, Schmidt, Eglinton and McIntyre2017) or as a combination of modern and 14C-dead carbon contaminant (Santos Reference Santos, Southon, Drenzek, Ziolkowski, Druffel, Xu, Trumbore, Eglinton and Hughen2010; Welte Reference Welte, Hendriks, Wacker, Haghipour, Eglinton, Gunther and Synal2018). Both approaches are functionally equivalent. In general, the mass-balance measured Fm (Fmmeasured) of an unknown sample can be expressed as:

with a corresponding uncertainty of:

with a corresponding uncertainty of:

To determine the values of Fmlarge-blank, Fmcont, and mcont, we measure and blank correct secondary standards as if they were unknowns. These values are then used to define a total chi-squared statistic:

This value encompasses about two-thirds of the variation seen in individual Fm values of large-mass “radiocarbon-free” samples. 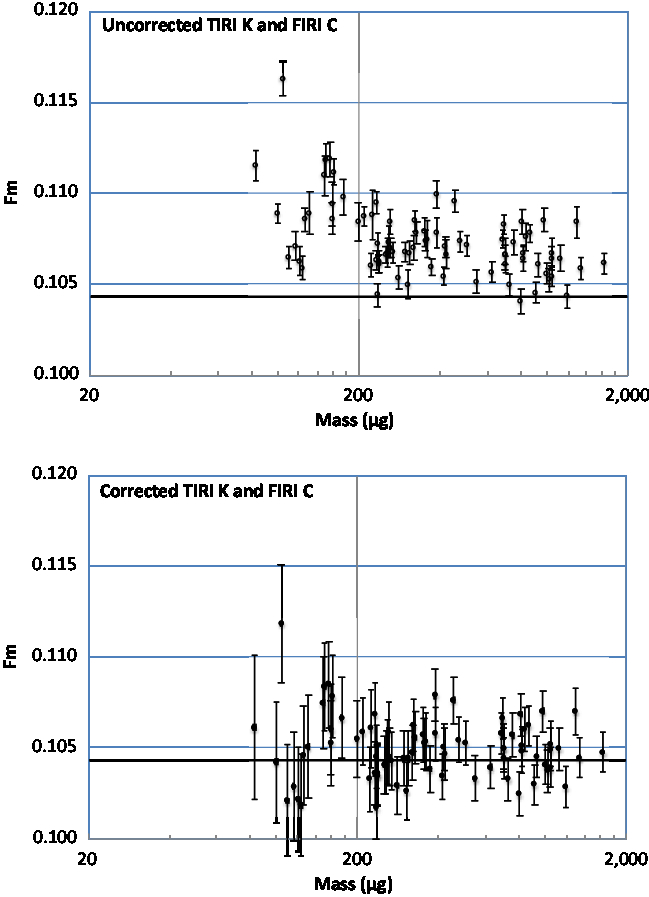 Figure 4 Uncorrected and corrected data from TIRI K and FIRI C (Turbidite Carbonate). The solid line is the consensus value of Fm = 0.1043. 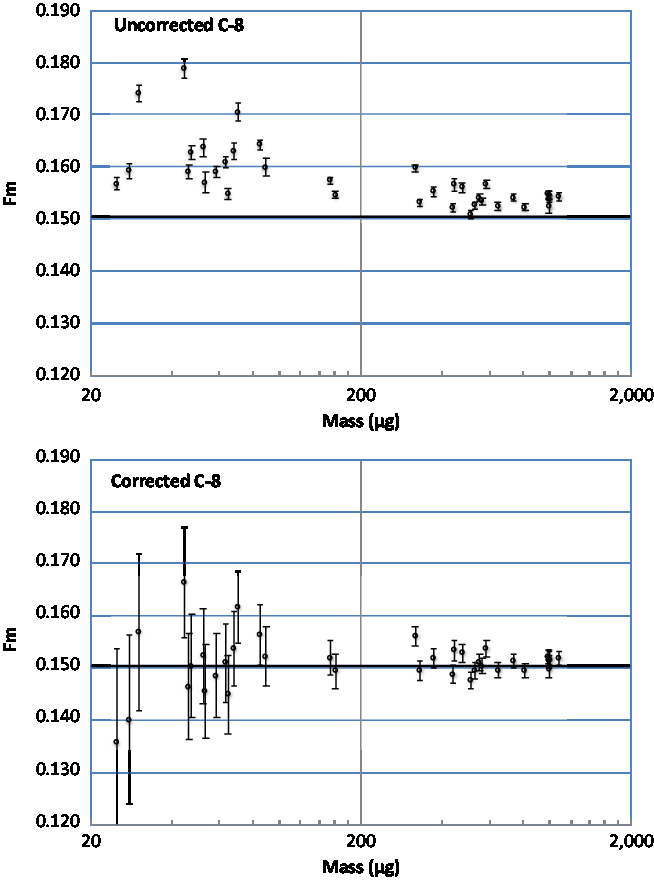 Figure 5 Corrected and uncorrected data from the organic sample C-8 (Oxalic Acid). The solid line is the consensus value of Fm = 0.1503.

While the model works to the extent that broad bias in reported Fmunknown values at low sample mass is removed, it fails to describe the substantial variability observed in the raw (i.e., Fmmeasured) data. While this variability is not totally understood, the assigned uncertainties in the blank values (i.e., δFmlarge-blank, δFmcont, and δmcont) significantly increases the reported uncertainties on unknowns (i.e., δFmunknown) and compensates for the variability observed in the raw data.

For samples with masses >100 μg carbon we do not apply a mass balance correction. For those samples the mass dependent correction is relatively small, and we find that more accurate results are obtained by applying only a blank that is measured concurrently with the unknown sample as opposed to a long-term average blank. Additionally, the values listed in Table 1 are not valid for all sample types. For example, 14C analysis of tree rings involves cellulose extraction chemistry, and would require a process specific determination of the associated blank.

NOSAMS also measures “ultra-small” samples. Ultra-small samples are typically defined as those samples having a carbon mass less than ~25 μg carbon. A similar exercise for estimating Fmcont, mcont, and Fmblank for these mass samples was conducted. Although not presented here, results similar to those listed in Table 1 were obtained. (Shah-Walter Reference Shah-Walter, Gagnon, Roberts, McNichol, Lardie-Gaylord and Klein2015).

We have developed a formula that fits the observed mass dependency in measured Fm values. Using long-term measurements of quality control samples, we have modeled the Fm and mass of the blank added during sample processing and AMS measurement. Long term measurements also incorporate short term (wheel-to-wheel) variability in the blank. Different sample types were used to assess the blank added for different sample preparation methods. Applying the mass dependent and mass independent blank values, we have corrected measured Fm values of secondary standards to significantly improve their agreement with consensus values in the mass range 25 μg < mass < 100 μg.

This work is supported by a Cooperative Agreement (OCE-1755125) with the U.S. National Science Foundation.