“It's all about the Mary”: A Garden History of Maryborough 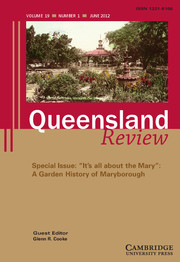