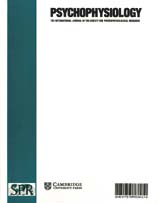 In this study, we explored the effects of flash intensity and age on visual-evoked potentials (VEPs) in a sample of 85 children aged 8–15 years. Results of previous studies are discrepant regarding the extent to which children show an evoked potential augmenting tendency at vertex, which has been reported to be a characteristic of an immature inhibitory control system. In the present study, VEPs to light flashes of four different intensities were recorded at Cz. The results confirmed that P1N1 and N1P2 at Cz were positively related to increases in stimulus intensity, whereas N1 was not related reliably to intensity. This difference between peak–peak and baseline–peak amplitude findings at Cz relative to evoked potential augmenting and reducing may help to explain discrepant results among earlier studies. Developmental changes were found for our sample of children that were independent of stimulus intensity: N1 amplitude increased significantly with age, whereas N1 latency showed a small (nonsignificant) age-related decrease.