Psychiatric emergencies constitute a large proportion of psychiatric referrals, with the response to this need therefore of great importance. The impact of the introduction of a telephone triage system on such factors as speed of response, assessment site, outcome and the personnel performing the assessment is examined within the context of closing of a 24-hour open access emergency system. Information was gathered from all emergency referrals, with 80 subjects randomly chosen and studied in depth.

The triage system afforded a greater flexibility of response, and the involvement of more experienced clinicians. It did not reduce the overall referral or admission rates.

Triage was found to be an effective method of introducing flexibility of response to emergency referrals while encouraging continuity of patient care.

The new system, summarised in Fig. 1, has two central features. First, the adoption of a triage system defined in Dorland's medical dictionary as “the sorting out and classification of [emergencies] to determine priority of need and place of treatment.” Second, provision of emergency out-patient appointments with senior clinicians (senior/specialist registrars and consultants) within 24 hours. 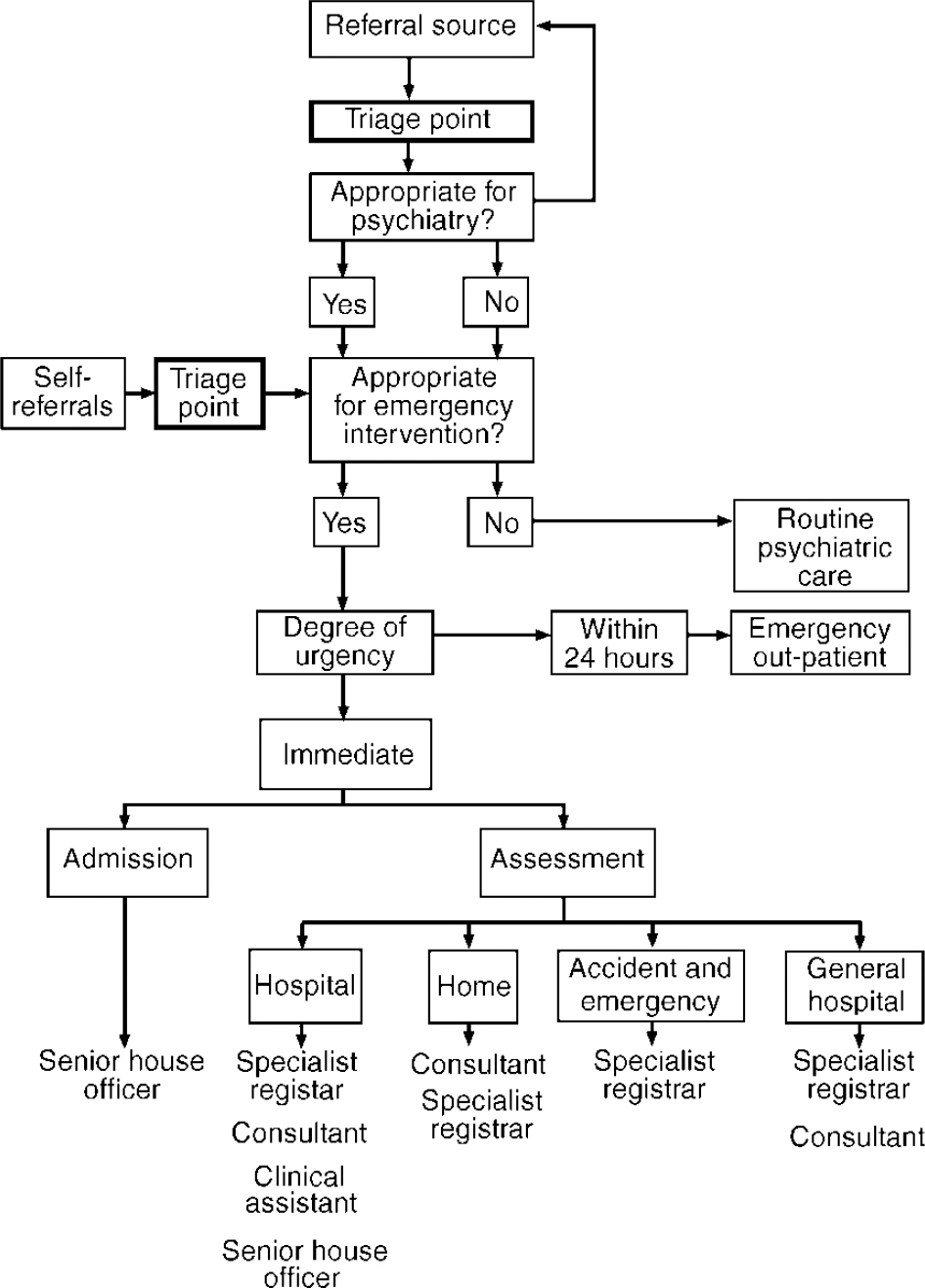 There is no clear consensus regarding what constitutes a psychiatric emergency. However, psychiatrists must influence the type of referrals appropriate to be responded to as emergencies. This study examines the impact of closing an open access 24-hour walk-in clinic and introducing a telephone triage system operated by senior/specialist registrars.

The study was undertaken in the Dundee Psychiatric Service which at the time was non-sectorised and comprised 92 acute general adult beds on two sites serving a predominantly urban population of 173 000. Local services included area specialist drug and alcohol services, a liaison service, two day hospitals and the CMHRT, which accepted tertiary referrals. At the time of this study, the waiting time for a routine out-patient appointment was 4-5 weeks and for an urgent appointment within 14 days.

Details of all emergency calls to the Dundee psychiatric services were logged by the on-call senior trainee, as were all patients seen at the hospital (to ensure the inclusion of self-referrals). Information on data of birth (DOB), gender, referral time and source, time seen and disposal was recorded. Eighty subjects were selected at random (using random numbers tables) from the total of 348 emergency referrals for the four-month study period November 1996 to February 1997.

Subject's case notes were reviewed to determine previous psychiatric contact, diagnosis, grade of doctor assessing the patient and disposal. Principal diagnosis was made on clinical grounds according to ICD-10 (World Health Organization, 1992).

Table 1 details the characteristics which fit our model of what constitutes an appropriate emergency referral. In brief, that the patient would be referred by either another clinical agency or the police, meet our criteria for severity and not be in current contact with psychiatry.

1 Deliberate self-harm, is included under diagnosis for the purposes of this study.

The aim of the study was to ascertain how a triage system would impact upon some of the aspects of emergency care provision, such as :

The female to male ratio was 3 : 2, with an overall age range of 18-89 years (mean 58 years) with the majority (80%) under 50 years of age. Two sets of case notes could not be traced. Table 2 shows the percentage of emergency referrals conforming to our model of appropriateness for emergency response.

Source and time of referral

The majority of referrals (97%) met our criteria. General practitioners (GPs) referred the majority (71%), with the police accounting for only 1%. Accident and emergency and medical wards accounted for 20% and community mental health nurses 3%. After 11 pm accident and emergency departments contributed a greater proportion (30%) of referrals than GPs with both self-referrals presenting between 5-11 pm. Out of hours referrals, from all sources were twice as likely to be admitted than day-time referrals.

Grade of psychiatrist and site of assessment

Almost half (46%) of all emergency referrals were seen by senior clinicians (senior/specialist registrar, associate specialist, consultant). Senior trainee assessments were distributed evenly throughout the daytime (9-5 pm), evening (5-11 pm) and overnight (11-9 am). Over half (54%) of all emergency referrals were assessed at the Liff Hospital site with the majority (84%) seen by senior house officers.

Over half (61%) of all emergency referrals had severe mental disorder and therefore met our criteria of severity in terms of diagnosis (Table 1). Of the remaining 39% over half were admitted, the principal diagnoses being alcohol misuse and adjustment disorders. The most common diagnosis was affective disorder (40%), followed by alcohol problems (19%), schizophrenia and delusional disorders (14%) and adjustment disorder (10%).

Of the 45% referrals admitted as emergencies the majority (89%) were known to the services. Almost one-fifth (16%) of all emergency assessments were referred on to the CMHRT. GP referrals were four times as likely to be admitted (77%) than referrals from any other source.

Using eventual disposal as a crude measure of appropriateness of emergency referrals 14% did not meet our criteria with the majority being referred to specialist drug and alcohol services and a small number returned to their GP (10%). The majority of admissions were female (81%) independent of diagnosis, with admissions for primary alcohol problems proving the exception, with males (71%) more likely than females (28%) to be admitted. Admission under the Mental Health (Scotland) Act 1984 accounted for only 6% of the total.

Seventy-seven per cent of emergency referrals were known to the service. New patients were less likely to meet our criteria for severity by diagnosis or disposal and were no more likely to be referred out of hours.

We randomly selected a sample of referrals to study in greater detail. However, it was noted for the four-month period that the closure of a 24-hour walk-in clinic and the introduction of a telephone triage system did not alter the total number of referrals, diagnostic groups or the admission rate when compared with a previous study of the service (further details available from author upon request). Triage did enable a greater flexibility of response to emergency psychiatric referrals. By incorporating nextday emergency out-patient appointments the number of patients being seen unnecessarily by on-call personnel was reduced by 25%, with senior doctors assessing those not felt to require immediate admission.

The high levels of referrals from other clinical settings (97%) represents a major improvement in Dundee where prior to closure of the 24-hour walk-in service, 32% of patients were self-referred. Our figures suggest that more patients accessed their GP prior to referral though we did not investigate the role of GPs as a filter to psychiatric care. There was also a significant increase in the number of emergency referrals from accident and emergency departments, with these referrals different from other referral sources as they were more likely to be young, male, new to the psychiatric services, with a primary diagnosis of substance misuse and less likely to be admitted. This profile is similar to that of self-referred patients in studies by Gordon & Hamilton (Reference Gordon and Hamilton1997) and McKenzie & Mackie (Reference McPhillips and Spence1993). From our current study it is not clear if this group would previously have referred themselves or have been escorted to the 24-hour clinic by police. The number of police referrals fell from 8% (further details available from the author upon request) to 1%, markedly lower than reported elsewhere (Reference McKenzie and MackieMcPhillips & Spence, 1993). The low level of patients with personality disorder (3%) referred contrasts with the findings of Whittaker & Appleby (Reference Whittaker and Appelby1995) and McPhillips & Spence (Reference McPhillips and Spence1993) and may be due to the local provision of community-based crises intervention for this group.

The number of referrals of patients known to the service (74%) was found to be similar to walk-in clinics both locally and nationally (Reference HislopHislop, 1996 ; Reference Kehoe and NewtonKehoe & Newton, 1990). Patients in current contact were excluded from our criteria of appropriateness for use of emergency services as it was thought that crises should be anticipated and, managed either in the community or by routine admission with no loss of continuity of care. This criterion is strict and fails to allow for acute behavioural disturbance in seriously mentally ill. In this study one-quarter of emergency referrals had current contact with 60% subsequently admitted, all of which we would therefore classify as inappropriate.

Diagnosis failed to meet our criterion for appropriateness in 39% of cases. One interpretation is that diagnosis per se has little impact on important management decisions such as hospitalisation and that other factors such as those noted by Gerson & Bassuk (Reference Gerson and Bassuk1980) for example, level of support or self-care, dangerousness and views of carers, are more relevant and need to be taken into account in the triage process. Furthermore, diagnosis is an outcome measure and fails to reflect the appropriateness of emergency referral, that is, the diagnosis of an adjustment disorder following a GP request to assess the possibility of a psychotic illness would constitute an appropriate referral.

Despite only 61% of diagnoses meeting our criteria for severity, 86% of cases met our criteria for disposal. This reflects diagnosis being only one factor in the process of deciding upon disposal (Reference Gerson and BassukGerson & Bassuk, 1980). The large number of patients with primary alcohol problems admitted as emergencies (47%) possibly reflects the absence of a home detoxification service.

Only 3% of assessments were not given a psychiatric diagnosis which is comparable with other studies (Reference Blaney and WestBlaney & West, 1987 ; Reference Kehoe and NewtonKehoe & Newton, 1990) which may reflect the quality of emergency referrals by our GP colleagues, or alternatively the overinclusive diagnostic labelling by psychiatrists suggested elsewhere (Reference Kehoe and NewtonKehoe & Newton, 1990).

Attention must be focused on how psychiatric services respond to emergency referrals. With continuing changes in provision of care for the mentally ill in the community, as well as the limits placed on resources, decisions regarding who is assessed, how urgently, where and by whom become increasingly important. Although triage by a senior trainee had no effect on overall referral or admission rates it had a role in allowing a greater flexibility of response ; greater input by experienced clinicians ; and potentially improved continuity of care.

The triage system, as described, was not universally popular among senior medical staff. First, higher trainees took all calls for the 24-hour period which impacted adversely on their core training placements, and dedicated time for research and special interests. Second, the emergency out-patient appointments required two senior doctors to allocate a minimum of one hour of their time each per day. Any additional referral was seen by senior trainees if the emergency slots were already allocated.

This study does not investigate whether another clinician operating the triage system would be just as effective. Recent literature (Reference Gallagher, Hubbert and HendersonGallagher et al, 1998) suggests that experienced nursing staff can operate a telephone triage system to the benefit of patient care. The next phase of evaluation will incorporate how this role is being carried out in recently established local community mental health teams by duty-workers.

We thank Dr Paul Cavanagh and Dr Anne Smith for their helpful comments on an earlier draft of this paper and Drs Stewart, Myatt and Larmour for their unpublished data on the Dundee service.