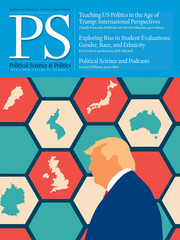 Spotlight: Interviews, Reflections, and Advice from Women in Legislative Studies