Enforcement of International Judgments and Decisions in Canadian Courts 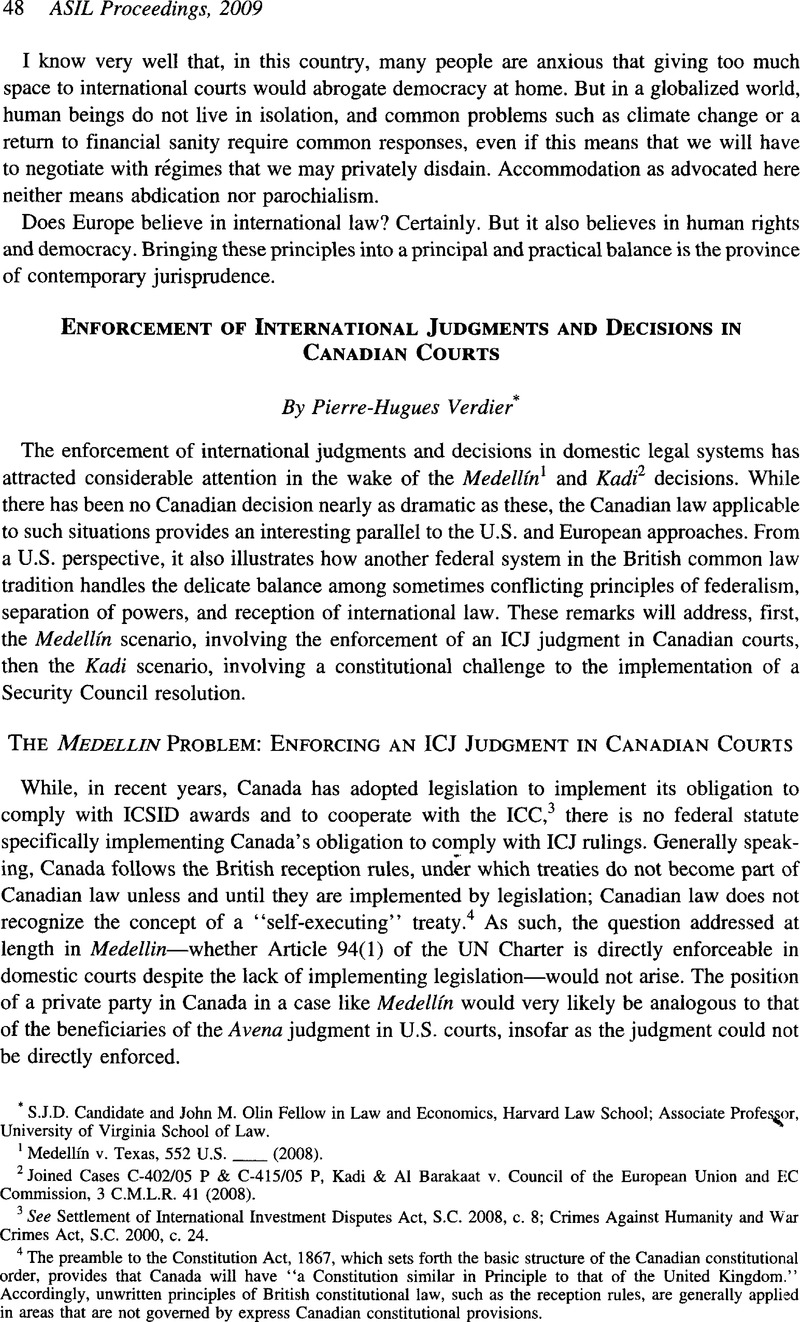 6 The Court of Appeal, however, also held in obiter that there was an alternative reason not to enforce the request for provisional measures, namely that the ICCPR does not create an international law obligation to comply with such measures. Therefore, there is a possibility that Ahani might be distinguished in the context of enforcing an ICJ judgment, on the ground that there is a clear international obligation to comply with the latter under Article 94(1). This reasoning would also apply to provisional measures “indicated” by the ICJ under Art. 41 of its Statute, given the Court’s holding in LaGrand (Germany v. U.S.), Judgment, 2001 ICJ Rep. 466 (Jun. 27), that such provisional measures are binding as international law. Nevertheless, the Court’s ratio decidendi clearly implies that international judgments are unenforceable absent implementing legislation. It should also be noted that following the ICJ’s decision in Delimitation of the Maritime Boundary in the Gulf of Maine Area (Canada v. U.S.), Judgment, 1984 ICJ Rep. 246 (Oct. 12), some Canadian courts appear to have taken for granted that the delimitation established by the Court should be recognized for purposes of litigation involving private parties. The issue of enforceability does not appear to have been argued, and there was in any event no indication that the Canadian Government intended to depart from the Court’s decision. These decisions therefore appear to have little bearing on the enforceability of ICJ judgments in Canada generally.

7 The Canadian practice of seeking approval of important treaties by Parliament prior to ratification ended in the 1960s. In 2008, the Federal Government announced that it would henceforth table treaties in the House of Commons prior to ratification, but would not require approval. See Van Ert, Gib, Using International Law in Canadian Courts 94-98 (2d ed. 2008).

8 Section 132 of the Constitution Act, 1867, which empowers Parliament to perform Canada’s obligations “arising under Treaties between the Empire and ... Foreign Countries,” has been held not to apply to treaties entered into by Canada since it acquired autonomy from the British Empire in foreign affairs.

10 It should be noted, however, that federalism would not be a significant obstacle in a case like Medellín, because criminal law and procedure are specifically within federal jurisdiction. See Constitution Act, 1867, s. 91(27).

13 See, e.g.. Baker v. Canada (Minister of Citizenship and Immigration), [1999] 2 S.C.R. 817 (pursuant to the presumption of conformity, Canada’s obligations under the—ratified but unimplemented—Convention on the Rights of the Child are relevant to judicial review of the reasonableness of a discretionary asylum decision); 114957 Canada Ltée (Spraytech, Société d’arrosage) v. Hudson (Town), [2001] 2 S.C.R. 241 (legality of municipal pesticide control regulation is supported, in part, by its consistency with the “precautionary principle” incorporated in international environmental instruments).

14 See, e.g., Hape, 2 S.C.R. 817, ¶¶ 55-56 (“Whenever possible, [this Court] has sought to ensure consistency between its interpretation of the Charter, on the one hand, and Canada’s international obligations and the relevant principles of international law, on the other. ... in interpreting the scope of application of the Charter, the courts should seek to ensure compliance with Canada’s binding obligations under international law where the express words are capable of supporting such a construction.”).

24 Based on (i) the combination of 1-year bar for asylum claim and higher standard for withholding of removal; (ii) categorical exclusions for terrorism and serious criminality; (iii) U.S. treatment of gender claims; and (iv) the corroboration and credibility requirements of the Real ID Act.

25 Section 7 because of the lack of discretion on the part of the immigration officer to consider specific circumstances; Section 15 because of disproportionate effects on certain categories of applicants (e.g., women because of U.S. treatment of gender claims.).

Enforcement of International Judgments and Decisions in Canadian Courts