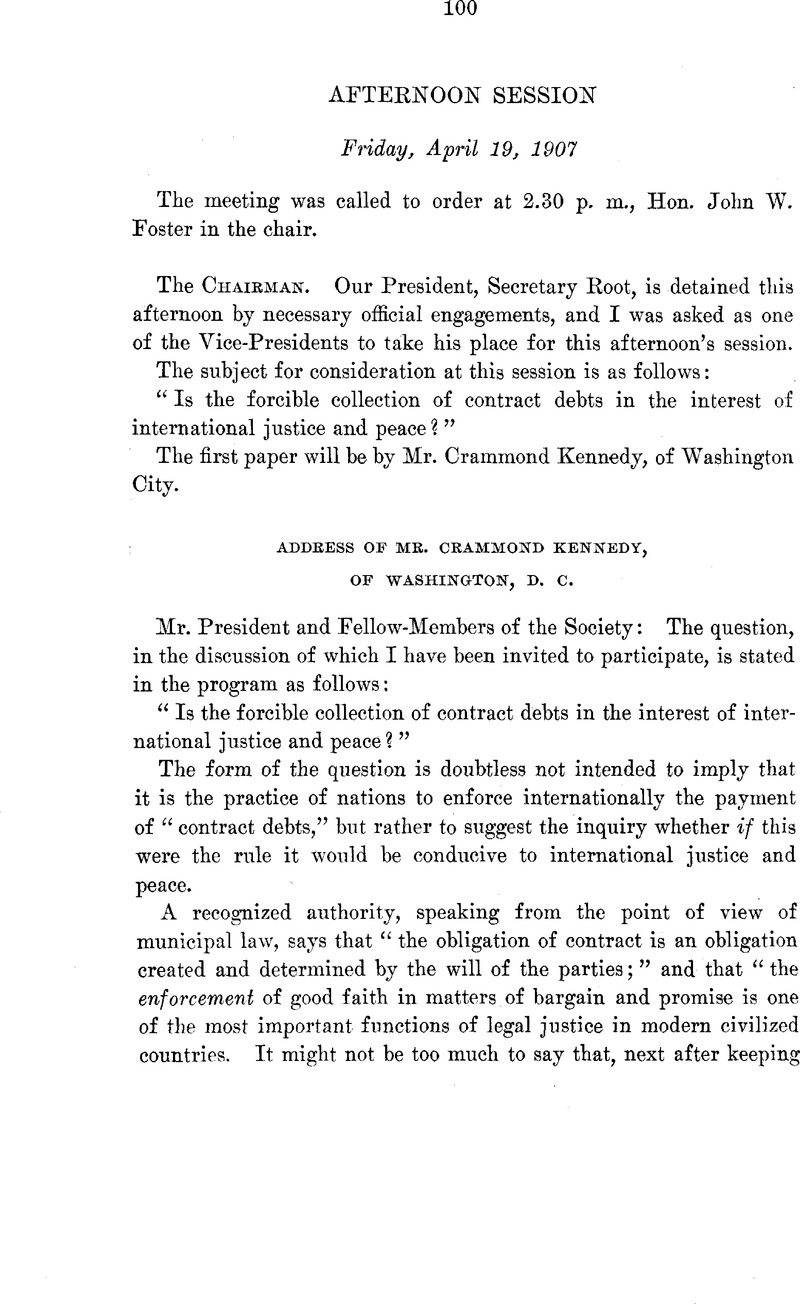 2 Law of Nations, Book II, Ch. XIV, § 214. Phillimore cites Grotius for the same distinction. “The difference,” he observes, “between subjects and foreigners is that the former must submit to the authority of the law, even when it is the instrument of injustice; but the latter are under no such obligation, but may by force compel the execution of justice on their behalf.” Exteri autem jus habent cogendi. (Phill. Inter. Law, III (2d ed.), 23.

In his able and interesting article on “ International Law and the Drago Doctrine,” in the North American Review of October 5, 1906, Mr. George Winfield Scott says that “ Dr. Drago seems to have expressed no doubts about the legal right of creditor states to force the payment of those pecuniary claims which have their origin in the ownership of the bonds of a debtor state.” But, on the contrary, Dr. Drago declares that “ it can not be admitted that a debtor government should be deprived of the right to choose the manner and time of payment ” — no matter how long it may have been in default. There are other expressions in his note to the same effect which can not be expected to be popular with long-deferred creditors or to command the unqualified assent of their governments.

10 In 1900 instructions were sent to all Argentine and Brazilian representatives abroad to lose no opportunity to advocate the maintenance of peace in South America and to discountenance the idea of any South American government acquiring an extension of territory by force of arms. (Encyc. Brit., 10th ed., Vol. XXVI, p. 619.)

12 The Hague Tribunal found as matter of fact “ that since 1901 the Government of Venezuela categorically refused to submit its disputes with Germany and Great Britain to arbitration, which was proposed several times, and especially by the note of the German Government of July 16, 1901.” (Penfield’s Report of the Hague Arbitration, p. 108; see also For. Rels., 1904, p. 507, for the decision of the Tribunal.)

The position taken by Venezuela in regard to a settlement of these war claims of foreigners was stated by her Minister of Foreign Relations, Mr. Eduardo Blanco, to Mr. Juan Pablo Rivas, Italian minister resident at Caracas, May 2, 1901, as follows:

“ The decree of January 24, last past, so far as it relates to such claims, and the other provisions therein cited, in so far as they are applicable, constitute the only rule which those interested can employ for the examination of the rights or titles which they allege.” (Ralston’s Venezuelan Arbitrations, appendix, 992.)

“ We also declare especially that under no circumstances do we consider in our proceedings the acquisition or the permanent occupation of Venezuelan territory.” (Promemoria of the Imperial German Embassy, December 11, 1901, For. Rels., 1901, p. 194.)

Mr. Hay refers to this assurance in his memorandum of the 16th of the same month, and, in the name of the President, expresses his appreciation of the courtesy of the German Government, and, while “ not regarding himself as called upon to enter into the consideration of the claims in question, believes that no measures will be taken in this matter by the agents of the German Government which are not in accordance with the well-known purpose, above set forth, of His Majesty the German Emperor.” (For. Rels., 1901, p. 195.)

20 Two Germans were taken prisoners on October 20, 1902, near Carupano, by a revolutionary detachment with the intention of extorting money from them, and to that end “they were insulted, assaulted, robbed, bound to a post, threatened with death, and thrown into a house infected by smallpox, in order that the payment of the sum demanded might be accomplished.” Part of the claim in one of these cases was for a rupture suffered when the claimant was fastened to the post. (Ralston’s Venezuelan Arbitrations of 1903, p. 547.)

Another German who would not give up his mule, on which he was riding, at the demand of a Venezuelan army officer, was attacked by another officer with his saber and seriously wounded. {Ibid., 578.)

These acts of violence were by no means confined to subjects of the blockading powers.

A Hollander, representing important houses in the United States and Europe, was publicly stripped at La Guayra and exposed to the derision of the bystanders by police officers who went unpunished. (Ibid., p. 914.)

A Frenchman of high standing, who merely requested that a requisition made upon him by a Venezuelan officer should be put in writing, was summoned to headquarters. Being questioned by the general in the midst of his staff and summoned to obey, M. Maninat did not refuse, but renewed his request for a written order, whereupon one of the Venezuelan officers struck him with a saber and “laid open his face from the forehead to the ear.” (Ibid., p. 51.)

25 Referring to the relations existing between Venezuela and foreign powers at the commencement of 1905 (two years subsequent to the triple blockade) Mr. Herbert W. Bowen, formerly United States minister to Venezuela, says, in an article in The North American Review of March 15, 1907, entitled “ Castro and American Diplomacy:”

“ Moreover, Germany and Great Britain began to show signs of restlessness because President Castro had not provided, as had been agreed in the protocols, for the payment of interest to British and German bondholders.”

28 Moore’s Arbs., Vol. IV, p. 3616. It was held, however, by the umpire of this commission that it had no jurisdiction of any claims arising ex contractu.

31 After stating in his Instructions to the Delegates of the United States to the Third International Conference of American States, held at Rio de Janeiro last summer, that it has long been the established policy of the United States not to use its armed forces for the collection of ordinary contract debts due to its citizens by other governments, Mr. Root observed (under date of June 18, 1906):

“ It is doubtless true that the nonpayment of public debts may be accompanied by such circumstances of fraud and wrong-doing or violation of treaties as to justify the use of force.” (Report of the Delegates, Doc. No. 365, Sen., 59th Cong., 2d sess., p. 41.)

In his reply to Mr. Drago’s note, without expressing concurrence or dissent, Mr. Hay observed:

“ The President declared in his message to Congress, December 3, 1901, that by the Monroe Doctrine ‘ we do not guarantee any state against punishment if it misconducts itself, provided that punishment does not take the form of the acquisition of territory by any non-American power.’

“ In harmony with the foregoing language, the President announced in his message of December 2, 1902:

“ No independent nation in America need have the slightest fear of aggression from the United States. It behooves each one to maintain order within its own borders and to discharge its just obligations to foreigners. When this is done they can rest assured that, be they strong or weak, they have nothing to dread from outside interference.” (For. Rels., 1903, p. 5.)

32 Referring to an episode in the financial history of San Domingo, Prof. J. B. Moore, as agent for the United States under the protocol of January 31, 1903, for the settlement of the claims of the San Domingo Improvement Company, against the Dominican Republic, by arbitration, observed:

“ Evidently no one contemplated such a thing as expulsion by force from the security. Possibilities of earthquakes, tempests, floods, revolutions, were doubtless contemplated, as reflected in the rate per cent.; but no one dreamed of possible national seizure of the security; no one thought that after San Domingo had received the money, a government would come into existence that would seize and destroy the security on thi with of which it was given. Otherwise there would either have been no loan at all, or else careful provision would have been made to restrain the Government from the misuse of its physical force.” (Argument of the United States before the Commission of Arbitration, p. 94.)

37 Report of the Delegates to the Third International Conference, held at Rio de Janeiro in 1906, p. 12.

In 1847 a motion was made in the House of Commons the object of which was to induce the Government to give redress to the British holders of unpaid Spanish bonds by issuing reprisals against Spain. The Secretary for Foreign Relations (Lord Palmerston) resisted the motion solely on the ground of expediency and public policy, but admitted that it was justified by the principles of international law, and gave no vague intimation that if the British holders continued to receive no redress from Spain the time would come when it would be politic as well as just to compel by measures of force the payment of this debt. (III Phil. Inter. Law, 2d ed., 37.)

39a This may now be said to be substantially the international law on the subject, in view of the convention adopted at The Hague to the effect that contractual debts shall not be collected by force unless impartial arbitration, proffered by the claimant government, is either declined, or unreasonably delayed, or the awards of the arbitrators are left unsatisfied, by the debtor government.

The discussion of the so-called “ Drago Doctrine” has resulted in an international agreement which insures the collection of “ contract debts” either by an impartial international adjudication, or, in default of such proceedings, by whatever other means may be available.

If the Hague convention, 1907, on this subject is put in practice, every just claim of an individual against a foreign government will hereafter be much more readily and surely collectible than ever before.

42 See Professor J. B. Hollander’s article on the convention of 1907 between the United States and the Dominican Republic in the second number of the American Journal of International Law and the text of the convention in the Supplement to the same issue.