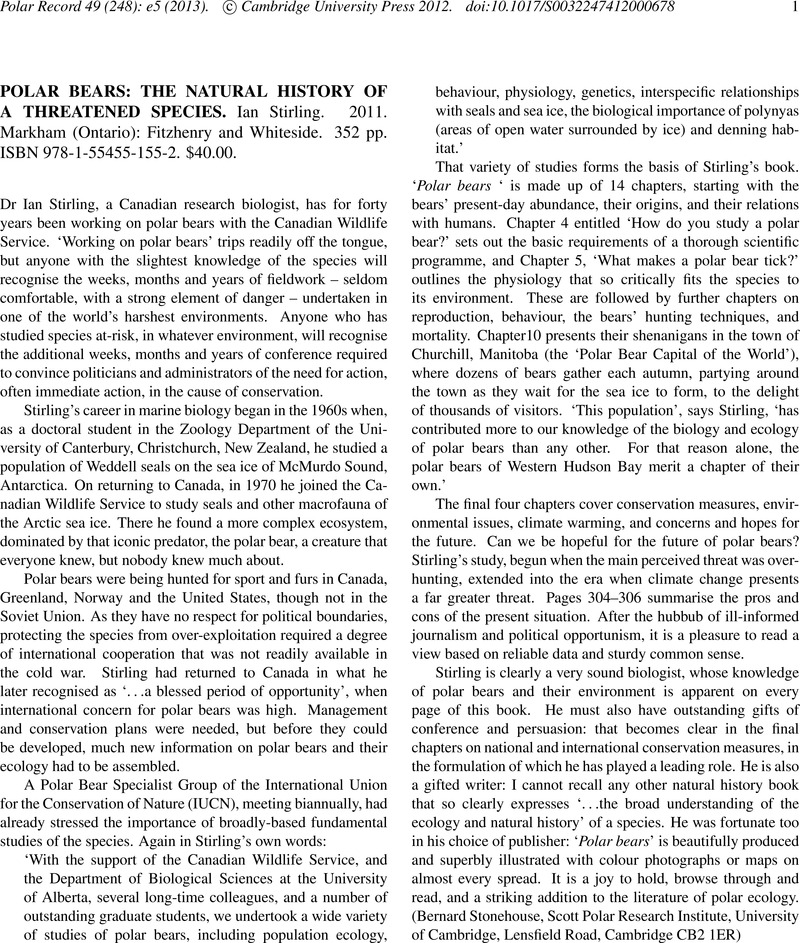 An abstract is not available for this content so a preview has been provided. To view the full text please use the links above to select your preferred format.
Type
Book Review
Information
Polar Record , Volume 49 , Issue 1 , January 2013 , e5
DOI: https://doi.org/10.1017/S0032247412000678[Opens in a new window]
Copyright
Copyright © Cambridge University Press 2012

Dr Ian Stirling, a Canadian research biologist, has for forty years been working on polar bears with the Canadian Wildlife Service. ‘Working on polar bears’ trips readily off the tongue, but anyone with the slightest knowledge of the species will recognise the weeks, months and years of fieldwork – seldom comfortable, with a strong element of danger – undertaken in one of the world's harshest environments. Anyone who has studied species at-risk, in whatever environment, will recognise the additional weeks, months and years of conference required to convince politicians and administrators of the need for action, often immediate action, in the cause of conservation.

Stirling's career in marine biology began in the 1960s when, as a doctoral student in the Zoology Department of the University of Canterbury, Christchurch, New Zealand, he studied a population of Weddell seals on the sea ice of McMurdo Sound, Antarctica. On returning to Canada, in 1970 he joined the Canadian Wildlife Service to study seals and other macrofauna of the Arctic sea ice. There he found a more complex ecosystem, dominated by that iconic predator, the polar bear, a creature that everyone knew, but nobody knew much about.

Polar bears were being hunted for sport and furs in Canada, Greenland, Norway and the United States, though not in the Soviet Union. As they have no respect for political boundaries, protecting the species from over-exploitation required a degree of international cooperation that was not readily available in the cold war. Stirling had returned to Canada in what he later recognised as ‘. . .;a blessed period of opportunity’, when international concern for polar bears was high. Management and conservation plans were needed, but before they could be developed, much new information on polar bears and their ecology had to be assembled.

A Polar Bear Specialist Group of the International Union for the Conservation of Nature (IUCN), meeting biannually, had already stressed the importance of broadly-based fundamental studies of the species. Again in Stirling's own words:

‘With the support of the Canadian Wildlife Service, and the Department of Biological Sciences at the University of Alberta, several long-time colleagues, and a number of outstanding graduate students, we undertook a wide variety of studies of polar bears, including population ecology, behaviour, physiology, genetics, interspecific relationships with seals and sea ice, the biological importance of polynyas (areas of open water surrounded by ice) and denning habitat.’

That variety of studies forms the basis of Stirling's book. ‘Polar bears ‘is made up of 14 chapters, starting with the bears’ present-day abundance, their origins, and their relations with humans. Chapter 4 entitled ‘How do you study a polar bear?’ sets out the basic requirements of a thorough scientific programme, and Chapter 5, ‘What makes a polar bear tick?’ outlines the physiology that so critically fits the species to its environment. These are followed by further chapters on reproduction, behaviour, the bears’ hunting techniques, and mortality. Chapter10 presents their shenanigans in the town of Churchill, Manitoba (the ‘Polar Bear Capital of the World’), where dozens of bears gather each autumn, partying around the town as they wait for the sea ice to form, to the delight of thousands of visitors. ‘This population’, says Stirling, ‘has contributed more to our knowledge of the biology and ecology of polar bears than any other. For that reason alone, the polar bears of Western Hudson Bay merit a chapter of their own.’

The final four chapters cover conservation measures, environmental issues, climate warming, and concerns and hopes for the future. Can we be hopeful for the future of polar bears? Stirling's study, begun when the main perceived threat was over-hunting, extended into the era when climate change presents a far greater threat. Pages 304–306 summarise the pros and cons of the present situation. After the hubbub of ill-informed journalism and political opportunism, it is a pleasure to read a view based on reliable data and sturdy common sense.

Stirling is clearly a very sound biologist, whose knowledge of polar bears and their environment is apparent on every page of this book. He must also have outstanding gifts of conference and persuasion: that becomes clear in the final chapters on national and international conservation measures, in the formulation of which he has played a leading role. He is also a gifted writer: I cannot recall any other natural history book that so clearly expresses ‘. . .;the broad understanding of the ecology and natural history’ of a species. He was fortunate too in his choice of publisher: ‘Polar bears’ is beautifully produced and superbly illustrated with colour photographs or maps on almost every spread. It is a joy to hold, browse through and read, and a striking addition to the literature of polar ecology.