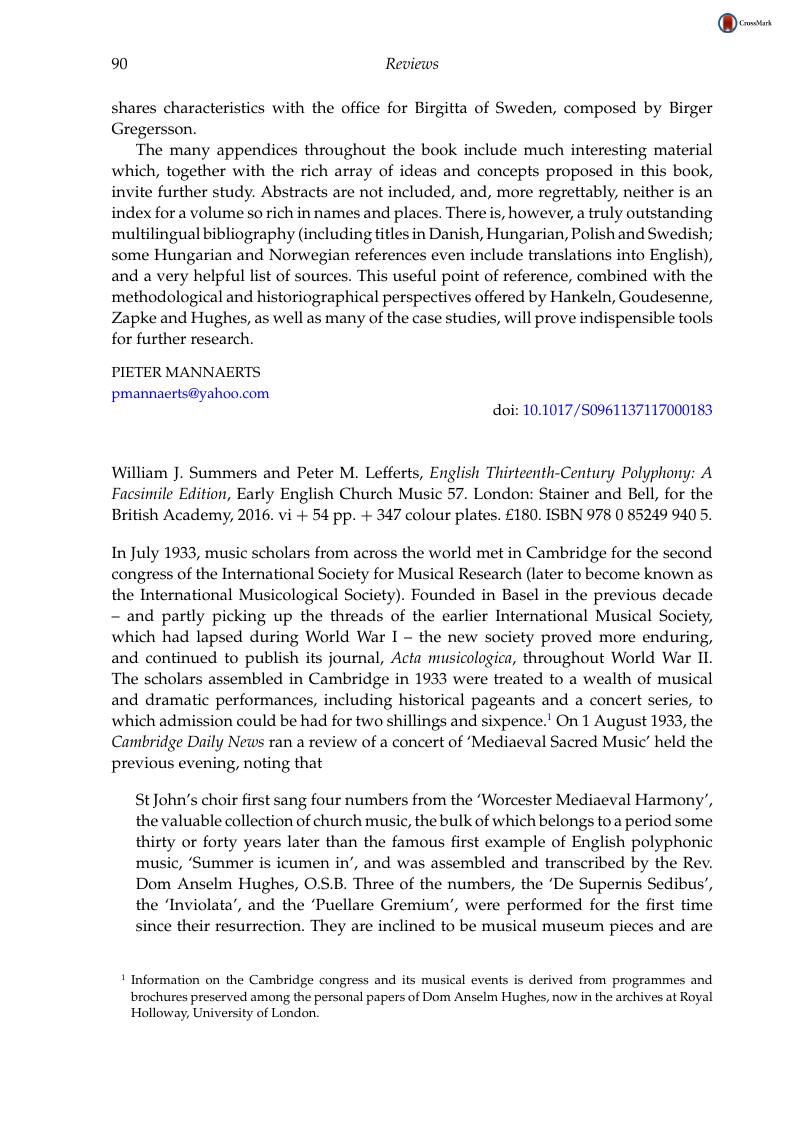 1 Information on the Cambridge congress and its musical events is derived from programmes and brochures preserved among the personal papers of Dom Anselm Hughes, now in the archives at Royal Holloway, University of London.

3 Hughes was also instrumental in facilitating a concert of medieval music – including, again, a piece from the Worcester fragments – as part of a series of ‘Eight Concerts of Music by English Composers’ staged at the Festival of Britain in 1951; he also collaborated with the composer Percy Grainger to publish modern performing editions in the series English Gothic Music. On the correspondence between Grainger and Hughes, and the origins of the series they co-published, see Grogan, Christopher, ‘Percy Grainger and the Revival of Early English Polyphony: The Anselm Hughes Correspondence’, Music & Letters, 77 (1996), 425–39CrossRefGoogle Scholar.

6 Hughes's own copy of WMH (held in the library of Royal Holloway, University of London) is copiously annotated with his own later comments and corrections, showing that his pioneering scholarship on the fragments remained a lifelong concern. In the light of this, it is to be regretted that WMH was reprinted without change in 1971 (supplemented only with a German introduction by Luther Dittmer).

7 The final plate of the volume (from US-PRu 119) is misnumbered 347 on the plate caption itself, and in the Catalogue on p. 43, resulting in two different plates both numbered 347; recte 349. The ‘List of plates’ (p. 53) unfortunately confuses matters further by listing the US-PRu 119 fragments in the order A, B, C, instead of B, A, C, as the photographs are printed: its correspondences of plate numbers to fragment letters are therefore all incorrect.

8 Ccc 8, although it is not the largest manuscript here, is printed at 95 per cent of full size so that each side of the whole fragment (which comprises the top part of a bifolium, with the leaf on one side of the fold vertically trimmed by about half) can fit on a single page of the fascimile (plates 5–6).

9 The publication of this facsimile was announced as forthcoming at least as early as 1993 (in Nicola Losseff, ‘Insular Sources of Thirteenth-Century Polyphony and the Significance of Notre Dame’, Ph.D. diss., King's College London, 1993, 12).

14 This and other advantages of printed books, including their importance as a resource for musicians in performance, were further discussed by Craig-McFeely, Julia, ‘Digital Man and the Desire for Physical Objects’, Early Music, 41/1 (2013), 131–3CrossRefGoogle Scholar.

15 A case in point is the well-known Reading manuscript, Lbl Harley 978, from which folios 8v–11v are reproduced: these leaves encompass the two-part untexted pieces, the three-part ‘Ave gloriosa mater’ with its French alternative text ‘Duce creature’, and the infamous ‘Sumer’ canon; the monophonic ‘Felix sanctorum chorus’ and the unnotated poem ‘Petrus romanis’, which occupy folios 10v–11r, have apparently been included merely because they fall between these polyphonic items, even though other monophonic pieces that are also adjacent to the polyphony (both before it, on folios 2r–8r, and after it, on folios 12r–13v) are omitted. Summers and Lefferts provide a brief listing of these monophonic pieces in the catalogue (p. 21), without the fuller details of editions and bibliography that they supply for the polyphony, and this is the case for some – but not all – monophonic pieces in other manuscripts that are not reproduced in the photographs. Lbl Harley 978 is now thankfully available in full on the British Library Digitised Manuscripts site: www.bl.uk/manuscripts/FullDisplay.aspx?ref=Harley_MS_978.

16 Fragments from WOc Additional 68 that cannot be shown to have been part of the three reconstructed books are presented separately, in alphabetical order with the other unrelated sources.

18 I very much hope that the outlines, at least, of Summers and Lefferts's manuscript descriptions and inventories can, in due course, be included with the manuscript images on DIAMM, so that their updates and corrections to the RISM information may become standard for all who access the material in this way.

19 Tempora mutantur, however: a collection of essays on medieval English music was published in Early Music, 45/1 (Feb. 2017), with contributions that reviewed the state of scholarship and performance, and others exploring a range of methodologies for approaching the music on its own terms.