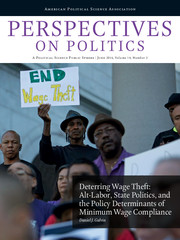 Cover Art: LOS ANGELES, CA - October 7, 2014: Labor groups and workers, including John Beard, with the LA Black Worker Center (holding sign), participate in a news conference on the steps of City Hall, to urge the City Council to raise the Los Angeles minimum wage to $15 per hour and include paid sick days and wage theft protections. (Photo by Katie Falkenberg/Los Angeles Times via Getty Images)

Review Symposium: The Politics of Precarity