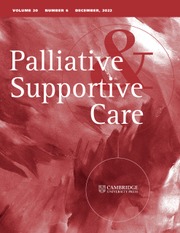 The sex of cancer: Ongoing lessons of cultural diversity 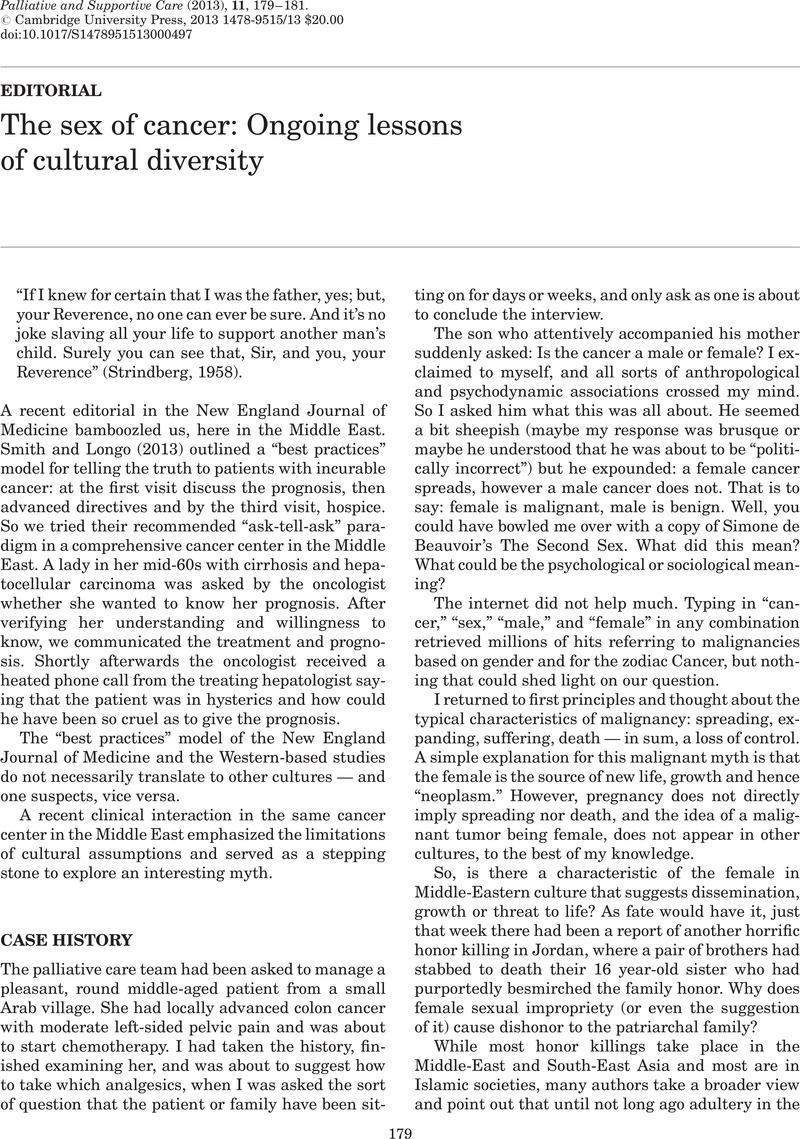 “If I knew for certain that I was the father, yes; but, your Reverence, no one can ever be sure. And it's no joke slaving all your life to support another man's child. Surely you can see that, Sir, and you, your Reverence” (Strindberg, 1958).

A recent editorial in the New England Journal of Medicine bamboozled us, here in the Middle East. Smith and Longo (2013) outlined a “best practices” model for telling the truth to patients with incurable cancer: at the first visit discuss the prognosis, then advanced directives and by the third visit, hospice. So we tried their recommended “ask-tell-ask” paradigm in a comprehensive cancer center in the Middle East. A lady in her mid-60s with cirrhosis and hepatocellular carcinoma was asked by the oncologist whether she wanted to know her prognosis. After verifying her understanding and willingness to know, we communicated the treatment and prognosis. Shortly afterwards the oncologist received a heated phone call from the treating hepatologist saying that the patient was in hysterics and how could he have been so cruel as to give the prognosis.

The “best practices” model of the New England Journal of Medicine and the Western-based studies do not necessarily translate to other cultures — and one suspects, vice versa.

A recent clinical interaction in the same cancer center in the Middle East emphasized the limitations of cultural assumptions and served as a stepping stone to explore an interesting myth.

The palliative care team had been asked to manage a pleasant, round middle-aged patient from a small Arab village. She had locally advanced colon cancer with moderate left-sided pelvic pain and was about to start chemotherapy. I had taken the history, finished examining her, and was about to suggest how to take which analgesics, when I was asked the sort of question that the patient or family have been sitting on for days or weeks, and only ask as one is about to conclude the interview.

The son who attentively accompanied his mother suddenly asked: Is the cancer a male or female? I exclaimed to myself, and all sorts of anthropological and psychodynamic associations crossed my mind. So I asked him what this was all about. He seemed a bit sheepish (maybe my response was brusque or maybe he understood that he was about to be “politically incorrect”) but he expounded: a female cancer spreads, however a male cancer does not. That is to say: female is malignant, male is benign. Well, you could have bowled me over with a copy of Simone de Beauvoir's The Second Sex. What did this mean? What could be the psychological or sociological meaning?

The internet did not help much. Typing in “cancer,” “sex,” “male,” and “female” in any combination retrieved millions of hits referring to malignancies based on gender and for the zodiac Cancer, but nothing that could shed light on our question.

I returned to first principles and thought about the typical characteristics of malignancy: spreading, expanding, suffering, death — in sum, a loss of control. A simple explanation for this malignant myth is that the female is the source of new life, growth and hence “neoplasm.” However, pregnancy does not directly imply spreading nor death, and the idea of a malignant tumor being female, does not appear in other cultures, to the best of my knowledge.

So, is there a characteristic of the female in Middle-Eastern culture that suggests dissemination, growth or threat to life? As fate would have it, just that week there had been a report of another horrific honor killing in Jordan, where a pair of brothers had stabbed to death their 16 year-old sister who had purportedly besmirched the family honor. Why does female sexual impropriety (or even the suggestion of it) cause dishonor to the patriarchal family?

While most honor killings take place in the Middle-East and South-East Asia and most are in Islamic societies, many authors take a broader view and point out that until not long ago adultery in the west was also considered punishable by death. More broadly still, many see honor killings as a special form of female domestic violence in which patriarchal societies seek to control the females. While some religions and cultures seem to have locked-in this particular practice, the origins and cultural urges of honor killings appear to pre-date the formal religions.

The female in the context of honor killing (and as a metaphor for malignancy) is associated with mistrust, suspicion, threat and fear. Mistrust of the female means she is held responsible for bad things that happen. We see this in the well-known Greek myth of the first woman, Pandora, who against divine instruction, opened the box and released evil into the world. This is paralleled by the biblical story of the Garden of Eden where Eve, also against divine instruction, ate the fruit of the Tree of Knowledge of Good and Evil which brought suffering into the world.

In Pandora's case there is an interesting psychodynamic interpretation. Originally it was not a box at all. Pandora had been given a large clay jar by Zeus and warned not to open it (http://en.wikipedia.org/wiki/Pandora, 2013). Opening the jar (providentially shaped like a uterus) and releasing evil into the world, has led some scholars to suggest it is akin to loss of virginity. That is, a woman who loses her virginity (against the rules) is a threat — but to whom, and why? Similarly, Adam and Eve in the Garden of Eden, upon eating of the fruit suddenly became aware of being naked and immediately covered their sex organs. Some societies control women with female genital mutilation while in other cultures, chaperones and chastity-belts. Female genital mutilation aims to ensure pre-marital virginity and to reduce a female's libido. The point being that a woman's virginity is deemed important in many diverse societies and that there was danger if society lost control of the woman and her virginity.

And what is cancer if not fundamentally, a loss of control?

Ben Zimmer, a noted linguistic commentator, has observed that there is no male equivalent for the word “mistress” in English. “It seems that the availability of mistress and various other female-only alternatives (including paramour and lover) has allowed these ungendered terms to swing toward men … Whatever the reason, this set of terms for clandestine extramarital partners is further proof that our language has deep, structural imbalances in describing the sexes” (Zimmer, Reference Zimmer2012) Indeed. This would appear to be a significant societal taboo.

Is it more acceptable for a man to sow his wild oats, than for a woman to spread her wings? A clue can be found in the writings of the Swedish playwright, Strindberg: “If I knew for certain that I was the father, yes; but, your Reverence, no one can ever be sure” (Strindberg, 1958). Curiously today, in parallel with the West's increased sexual permissiveness and the loosening of marital customs, science is able to examine the DNA and indicate who the father is with 100 per cent certainty. As a result we know that in western society up to 15 per cent of children are born to a male other than the presumed father.

The mother on the other hand, always knows where her genes are. An individual male might be pleased to have his genes spread far and wide, like wild oats, and for them to take root by happenstance. However being cuckolded is another story. In some societies, it is the norm to have more than one wife (polygamy). However the reverse does not hold — it is by and large universally frowned upon, in all cultures, for a woman to have more than one husband (polyandry).

What is the cause of male insecurity that society goes to such lengths to protect his vanity, to confirm that the woman is sexually “his,” to control the woman? A male, for obvious biological reasons, does not want to expend his life's energy looking after another male's genes. (Nor I imagine, would a female.) Therefore, the only way to be certain that his particular female would host his and only his genes would be to not let her spread her wings. Letting her go wild, like oats, would create doubt. Therefore the patriarchal society needs to control their womenfolk.

Ah, is that the reason that malignant is female? A malignant growth is female because when females spread themselves promiscuously this threatens the patriarchal society. The threat to the male is the loss of control of knowing where his genes are. The helplessness of uncertainty unleashes anger, which in turn may lead to violence, directed at the shaming female. Conversely the male tumor is benign because he is the strong, central and stable pillar of a patriarchal society — or at least he wants to project himself as such, since he needs order and control.

We sent a letter (rejected for publication) in response to the Smith and Longo editorial with a suggested modification to their “ask-tell-ask” paradigm. In my view, this paradigm is based on a narrow ethical and cultural understanding of autonomy. We suggested adding the question, “Why do you want to know?” It is problematic to evaluate information before knowing it. This question frequently initiates the other conversation (about family, life's achievements, hopes, and fears), which provides the framework to tackle the question of prognosis and the shadow of death.

While to western hearing the metaphor that a malignant cancer is female and a benign one is male may be offensive, the biological urge to protect ones genes is powerful and is reflected in cultural norms. The family in our case needed to ask about the medical condition of the matriarch in terms they understood (or accepted). After I explained to them that yes it was a female cancer, they acknowledge the fact, although I suspect, in true paternalistic tradition, they did not tell the mater.

Smith, T.J. & Longo, D.L. (2012). Talking with patients about dying. New England Journal of Medicine, 367, 1651–1652.CrossRefGoogle ScholarPubMed
Strindberg, A. (1887). The Father. London: Penguin Classics.Google Scholar
Zimmer, B. (2012). How we talk about the ‘other’ men and women, from Visual Thesaurus. http://www.visualthesaurus.com/cm/wordroutes/how-we-talk-about-other-men-and-women/ (Accessed 23 February 2013).Google Scholar

The sex of cancer: Ongoing lessons of cultural diversity
×

The sex of cancer: Ongoing lessons of cultural diversity
×

The sex of cancer: Ongoing lessons of cultural diversity
×
×