Where rare species are concerned, including those with restricted range, their use for traditional medicine can have disastrous impacts on local populations already under pressure (UN Office on Drugs and Crime, 2016, http://www.unodc.org/documents/data-and-analysis/wildlife/World_Wildlife_Crime_Report_2016_final.pdf). Difficulty in monitoring such illegal activity has been illustrated by enforcement raids across India since June 2017 (National Geographic, 7 July 2017, https://news.nationalgeographic.com/2017/07/wildlife-watch-india-monitor-lizard-poaching-plant-root-hatha-jodi/), with authorities seizing supposedly rare Himalayan plant roots referred to as hatha jodi.

Hatha jodi (Plate 1) is purported to have magical powers to ward off bad luck and change lives, bringing wealth, power and contentment. These qualities make it an attractive purchase on Hindu tantric stores and websites. However, laboratory examinations in India and the UK in May 2017 have confirmed that hatha jodi is actually the dried hemipenes of Indian monitor lizards (Bengal monitor Varanus bengalensis and yellow monitor Varanus flavescens). The penalty for killing these species or dealing in their body parts is equivalent to doing so with a tiger in India (Wildlife Protection Act 1972 of India) and internationally (CITES Appendices, 2017). 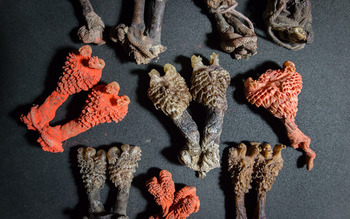 This raises the question of whether customers and traders really believe they are dealing with plant roots. Is this, rather, a cover to disguise trade in protected lizards through the deliberate use of a code word? The latter would seem likely, as we documented hundreds of such advertisements carried by online retailers during a search made over a 4 week period in June 2017. The retailers included Amazon, eBay and Alibaba, which presumably did not realise they were involved in illegal sales, at prices of up to USD 250 apiece, of a species protected across Asia, Europe and North America.

Perhaps exaggerated respect given to spiritual myths thickened the smoke screen by trading unscrupulously on the religious connotations of hatha jodi (Frontiers in Ecology and the Environment, 2015, 13, 325). Either way, when it comes to illegal trade, the Shakespearian question ‘What's in a name?’ reveals more loopholes than a knitted scarf. We believe that, for effective enforcement of wildlife trade laws, in addition to a standardized naming policy based on up-to-date taxonomic classification (Conservation Letters, 2016, 9, 313), creation of a readily accessible list of colloquial names used as codes to sell globally protected species is essential.