Semiconducting quantum dots (QDs) can be used to enhance the performance of a variety of devices encompassing optoelectronic, thermoelectric, and alternative energy technologies. Often, a small amount of another element must be added to the semiconducting QDs to provide extra electrons and improve conductivity. At the nanoscale, these extra electrons are difficult to locate. Rachel Goldman and her colleagues at the University of Michigan have now shown the feasibility of such measurements.

As reported in the May 11 issue of Applied Physics Letters (DOI: 10. 1063/1.4919919; 192101), the researchers used scanning thermoelectric microscopy to locate electrons in semiconducting QDs on surfaces. Beginning with high-purity solid Ga, As2, and In as the raw materials, they used molecular beam epitaxy and employed Stranski–Krastanov growth to fabricate InAs QDs on a GaAs substrate. Such structures can be doped with another element, such as Si, to provide extra electrons. However, it is difficult to predict how many of the dopants will incorporate into a QD rather than into the surrounding layers. Each QD is believed to contain fewer than 10 dopant atoms, making them particularly challenging to locate.

The researchers then used a scanning thermoelectric microscope (SThEM) with a specially prepared tungsten tip. The meas-urements were performed in ultrahigh vacuum, and the sample was heated a few Kelvins above room temperature for several hours to achieve a uniform temperature in the QD, surrounding layers, and substrate. Upon contact, the SThEM tip locally cools the QD, causing the extra electrons in the hot sample to travel toward the cold tip, generating a thermoelectric voltage. Since this voltage depends on the number of electrons, the research team was able to locate those extra electrons using measurements at several points across the QD.

Specifically, the dependence of the thermoelectric voltage on the thermopower allowed the researchers to locate the extra electrons: they found fewer electrons within the interior of the QD than in the surrounding substrate, which could mean that the silicon “dopants” prefer to stay outside the QD.

“We were really interested in measuring the thermopower, since QDs are considered promising for thermoelectrics,” doctoral student and NSF Fellow Jenna Walrath wrote of her original goals for the research. Goldman and Walrath were surprised by the unusual behavior of the QD thermopower, and their efforts to explain it led them to locating the extra electrons. 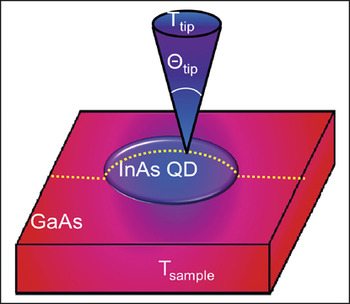 Schematic of the scanning thermoelectric microscope setup, which consists of a room-temperature probe tip in contact with a heated sample. The yellow dashed line represents the measurement points of the thermoelectric voltage at each tip-sample contact. Reproduced with permission from Appl. Phys. Lett. 106, 192101 (2015); DOI: 10.1063/1.4919919.

“While the answer wasn’t that exciting for thermoelectrics, understanding how dopants incorporate into nanostructures is unprecedented. The lessons learned from this work provide a pathway toward strategic placement of just a few dopants at a time,” Walrath says.

Their work could be extended to other nanostructures such as quantum wells and nanowires. “The potential of SThEM is just beginning to be explored,” Goldman says, “so I expect it will continue to play a central role in bridging atoms to devices.”