Gallium nitride (GaN) and related compounds have large bandgap energies and are attractive for light-emitting devices operating in blue to ultraviolet spectral regions [Reference Maruska and Tietjen1,Reference Akasaki, Amano, Sota, Sakai, Tanaka and Koike2]. Recently, room temperature pulsed operation of GaN-based laser diodes (LDs) has been reported [Reference Nakamura, Senoh, Nagahama, Iwasa, Yamada, Matsushita, Kiyoku and Sugimoto3]. In these reports, it was shown that the introduction of a quantum well (QW) structure as an active layer is very effective for realizing the GaN-based laser. The characteristic temperature of lasers is one of the important parameters for applications such as to optical memories, from the viewpoint of high-temperature operation. A less sensitive temperature is preferable for wide-ranging applications. In this paper, we report the estimation of temperature sensitivity for a GaN-based laser with a quantum well structure as the active layer.

The internal quantum efficiency of GaN QW layers is one of the important issues in terms of low power consumption and operation reliability. In the first step, carrier confinement in a GaN QW layer is estimated.

We have assumed the equilibrium condition in a single QW structure and defined the confinement ratio as a function of the density of states, as shown in the following equation.

Where, Rconf, N2D and N3D are the confinement ratio, number of carrier in a QW layer and barrier layers, respectively. In this estimation, we have assumed a quantum well with a finite offset. The density of states in the single QW layer (2-dimensional), g2D(E) and the barrier layer (3-dimensional), g3D(E) can respectively be written as [Reference Praire and Kolbas4]

The total carrier concentration, Ntot in the QW and barriers is expressed as

Where, f(E,Ef) is Fermi distribution function. From eqs. (1) - (4), we can derive the equation of the carrier confinement ratio.

The confinement ratio of the GaN/AlGaN QW structure as a function of the injected carrier density is shown in Fig. 1. We also show that of the GaAs/AlGaAs QW for comparison. We assumed that the band offset ratios of ΔEc/ΔEv are 0.71/0.29 [Reference Wei and Zunger5,Reference Martin, Strite, Botchkarev, Agarwal, Rockett, Morkoç, Lambrecht and Segall6] for GaN/AlGaN QWs and 0.65/0.35 [Reference Kroemer7] for GaAs/AlGaAs QWs. In the case of GaN-based VCSELs, an injected carrier density higher than 5 × 1018 cm−3 is roughly required for laser operation. A high confinement ratio is required at high carrier densities for laser device application. If we adopt an AlGaN layer with an aluminum composition higher than 10% as the barrier layer, the confinement ratio is almost unity, which means that all injected carriers are confined to the QW layer. In this case, we can regard the QW layer as an infinite potential well. 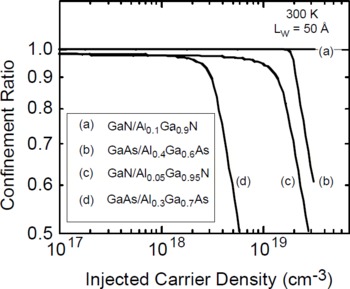 Fig. 1 Confinement ratio as a function of injected carrier density.

The optical gain of GaN QW layers is an important parameter in the estimation of the threshold current density. The estimation of the linear gain for GaN QWs is carried out using the density-matrix theory with intraband relaxation broadening [Reference Asada and Suematsu8-Reference Nakamura, Senoh, Nagahama, Iwasa, Yamada, Matsushita, Sugimoto and Kiyoku10]. This model is already established for GaAs-based and InP-based semiconductor lasers, and the calculated results show good agreements with those of experiments. We assumed the square of the dipole moment, <Rch 2> to be a function of bandgap energy and GaN quantum wells to have an infinite potential barrier. The parameters used in this estimation are summarized in Table I. The linear gain is given by [Reference Asada, Kameyama and Suematsu9]

ω denotes the angular frequency, μ is the magnetic permeability, ε is the dielectric constant, n is the refractive index of the active layer. The Fermi-Dirac distribution in the conduction band fc(E) and valence band fv(E) are assumed, and τin is the intraband relaxation time. Ecn and εcn denote sub-band energy and total energy of electron in quantized level, respectively.

Table I. Material parameters used in the estimation.

The maximum gain is plotted as a function of the injected carrier density in Fig. 2. At present, the intraband relaxation time of a GaN system has not yet been reported. Therefore, we assumed that the relaxation time τin is 0.1 ps, which is normally used in the case of estimation for GaAs-based laser [Reference Asada and Suematsu8]. In InGaN QWs Lasers, it is reported that τin is 0.05 ps [Reference Nakamura, Senoh, Nagahama, Iwasa, Yamada, Matsushita, Sugimoto and Kiyoku10]. Now, we assumed τin is independent on temperature, its affection for the temperature dependence of threshold current is negligible. We also assumed that the bandgap energy of GaN and the change of the optical cavity length have a negligible dependence on temperature, taking into consideration the small change of temperature near 300 K is considered. The blue/ultraviolet vertical-cavity surface-emitting lasers (VCSELs) are candidates for use in optical imaging systems such as high-density optical memories and photolithography because these lasers have advantages in the fabrication of two-dimensional array structures, as well as low power consumption [Reference Honda, Katsube, Sakaguchi, Koyama and Iga11]. The structure shown in Fig. 3 is considered for our estimation of the threshold current density. We did not consider a change of the optical cavity length to be a function of the temperature, which indicates that the threshold current density of GaN is higher than that of GaAs. However, the temperature sensitivity of a transparent carrier density on GaN QWs is almost the same as in the case of GaAs QWs. Although the required threshold current density is still high, the characteristic temperature T0 of GaN-based VCSELs is expected to be ∼ 300 K as shown in Fig. 4. It has been reported that the temperature sensitivities of stripe-type InGaN QW lasers are about 170 [Reference Nakamura, Senoh, Nagahama, Iwasa, Yamada, Matsushita, Sugimoto and Kiyoku12] and 320 K [Reference Nakamura, Senoh, Nagahama, Iwasa, Yamada, Matsushita, Kiyoku and Sugimoto13]. The ideal characteristic temperature of GaN QWs is comparable to that of GaAs QWs. The estimation shows that the GaN-based VCSEL has good operation reliability for application to systems.

Fig. 2 Maximum gain dependence on injected carrier density. Active layers of (a) and (b) are GaN and GaAs, respectively. 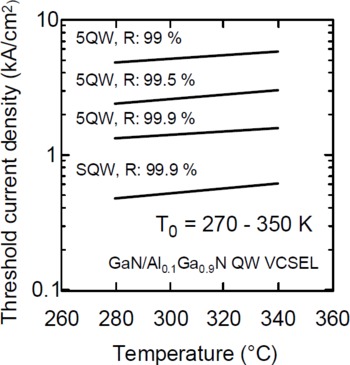 It has been reported that the ideal characteristic temperature of GaAs QWs is about 330 K [Reference Dutta14], which is compatible with our estimation using the same method as that for GaN QWs. On the other hand, the experimental characteristic temperature of GaAs is lower than the estimated one. The estimated high T0 in GaN LDs might be due to the suppress a carrier leakage over heterobarriers [Reference Dutta14], or the automatic introduction of a low dimensional structure like as a localized state in an active layer [Reference Nakamura, Senoh, Nagahama, Iwasa, Yamada, Matsushita, Kiyoku and Sugimoto13].

The authors would like to thank Professor Emeritus Y. Suematsu of Tokyo Institute of Technology for his encouragement. This work is supported by High-Tech Research Center Project and GRANTIN-Aid for Encouragement of Young Scientists (No. 09750012) from the Ministry of Education, Science, Sports and Culture. This work was carried out as a part of the JSPS Research for the Future Program (JSPS-RFTF96R16201).