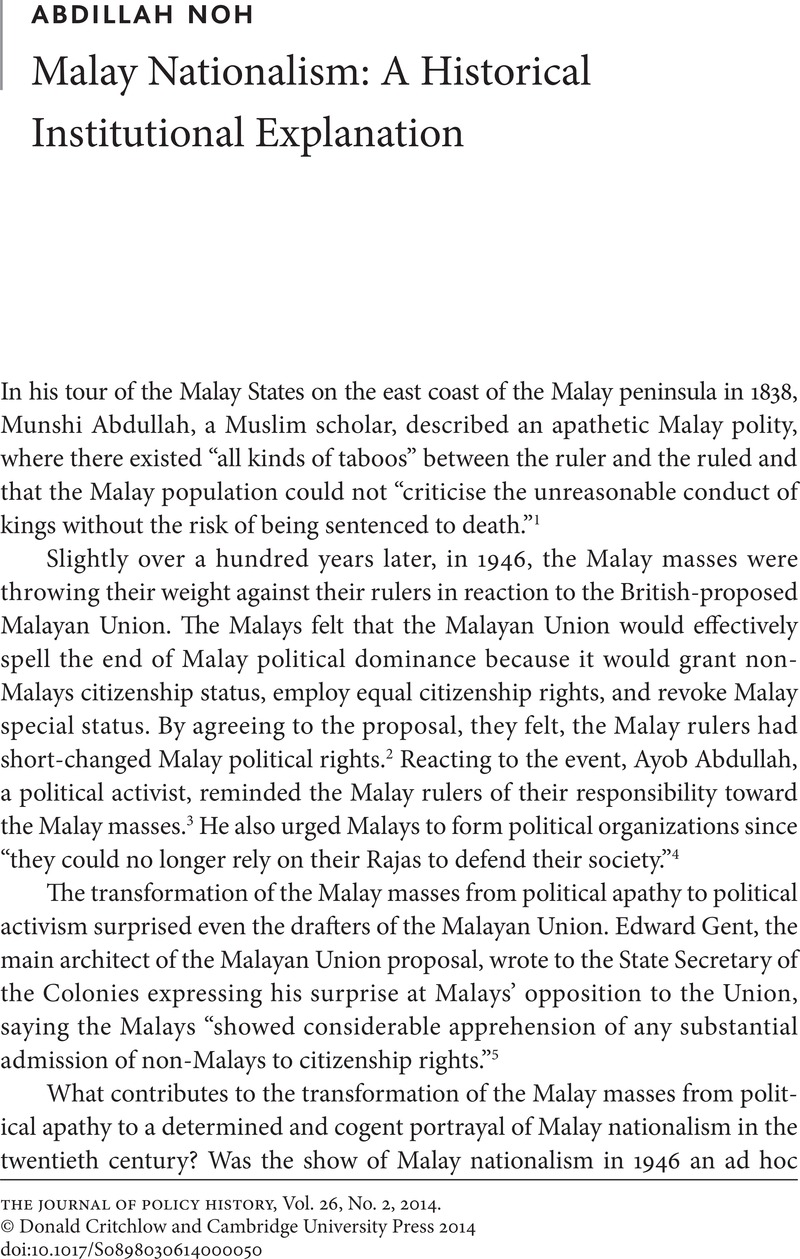 2. Among other things, the Union would see a unitary state and place Malaya under Britain’s foreign jurisdiction act and the granting of equal citizenship rights. Draft Directive on Policy in Malaya in Appendix I of the report of War Cabinet Committee on Malaya and Borneo, CAB 98/41, dated 18 May 1941, in Boon Kheng Cheah, The Masked Comrades (Singapore, 1979), 12.

7. See, for instance, Amri, “The Economic Dimension of Malay Nationalism”; Cheah, “The Erosion of Ideological Hegemony and Royal Power and the Rise of Post”; Mark Emmanuel, “Viewspapers: The Malay Press of the 1930s,” Journal of Southeast Asian Studies 41, no. 1 (2010): 1–20.

8. This is put forward by Harry Benda in a reprint of Roff, The Origins of Malay Nationalism, ix.

17. Levi, Margaret, “A Model, a Method, and a Map: Rational Choice in Comparative and Historical Analysis,” in Comparative Politics: Rationality, Culture, and Structure, ed. Lichbach, Mark I. and Zuckerman, Alan S. (Cambridge, 1997), 19–41, 265.

20. Arthur, Increasing Returns and Path Dependence in the Economy, 112. The four features highlighted are large setup or fixed costs. Given the large amount of investments and high fixed costs, individuals and organizations have higher incentives to stay on a particular technology or stick to a particular option: learning effects is a phenomenon that shows once we are good at something we tend to be better at innovating it rather than seek something entirely new; coordination effects relates how current adoption of techniques would encourage the tying up with other related techniques to make it more attractive; adaptive expectations relates to how the adoption and prevalence of an option will limit our future choices, as we tend to not want to pick future “wrong” choices and would hatch our bet on choices that would be “successful.” Arthur, Increasing Returns and Path Dependence in the Economy, 112.

27. British officers who were appointed had short stints with not enough time to understand the complexity of the Malay States. These officers were on normal tour of duty for, for example, Harry Ord (served in the West Indies and Africa before Malaya), J. W. Birch (served in Sri Lanka), and Andrew Clarke (served in Goldcoast, Australia, and New Zealand before Malaya).

30. The British government needed to bring military troops from India to quell the unrest. Birch’s murder emptied the Straits Treasury and the colonial office had to tap the Colonial Fund. Cited in Emily Sadka, The Protected Malay States, 1874–1895 (Kuala Lumpur, 1968), 96.

31. There was unrest first in Perak and then smaller political skirmishes in Selangor, Negeri Sembilan, and Pahang in the later years.

36. Another reason often given for the formation of the FMS is that it was meant to offload the financial burden of the state of Pahang. Pahang was touted for its large mineral resources by the likes of Swettenham. Such economic promise did not materialize and Pahang became a financial burden. In 1895, Pahang’s expenditures were two and half times that of its revenue, and the mining proceeds, which were touted to form the bulk of Pahang’s revenue, were less than 5 percent of the combined revenue of the mining proceeds from the other three states. Andaya, Barbara Watson and Andaya, Leonard Y., A History of Malaysia, 2nd ed. (London, 2001), 185.

40. CO 273/1906, 16 December 1905. Given the disquiet among the rulers on the secondary role played by the states, Sir John Andersen in his speech at the opening of the council gave the assurance that nothing would change the existing arrangement. He said: “It was no small sacrifice of individuality on the part of the rulers to enter on the compact of Federation. . . . They have done this in the full confidence based on the fact of the past that whatever is done either by the British or by this council . . . will always be scrupulously observed. . . . They are confident that we will never forget that our powers are derived wholly from their gift, and that we are here in a Malay country as the advisers and counsellors of its Malay sovereigns,” in High Commissioner to Resident General, 16 December 1905, in High Commissioner to CO, Confidential Dispatch.

43. Roff, The Origins of Malay Nationalism, 91. The term “British Malaya” was first used by Governor Frederick Weld in 1883 during a presentation to the Royal Colonial Institute, but it was not used in any official document by British officials until 1903, when Frank Swettenham used the term to describe his ambition of having a Malay empire that encompassed Burma, the Straits Settlements, and North Borneo.

51. The first Malay vernacular school was set up in Klang, Selangor, in 1875 and the first Malay school in Perak started in 1883, Selangor State Secretariat 108/80; Perak Annual Report 1883, Selangor State Secretariat 1880–87, 2123/87, cited in Sadka, The Protected Malay States, 289. Also, education was provided by individuals and centered on Islamic education.

57. Ibid., 147. The college curriculum went beyond what Windstedt had in mind. Rather than just train teachers in agriculture, handicrafts, and gardening, the founding headmaster, T. S. Dussek, introduced literary education on Malay language and culture in the hope that the graduate teachers would help upgrade the quality of vernacular education in the Malay States. To encourage graduates of the college to join the British administration, Dussek also promoted the idea that Malay language be used in government at the local level. In the early years, textbooks from the Dutch East Indies (Indonesia) were used. The use of Indonesian texts could well influence the thoughts of some its graduates toward Malay nationalism. This is because, at the time, there was a significant nationalistic movement in Indonesia against Dutch colonial rule.

60. It should also be noted that in the early years after the Pangkor Treaty, the appointment of Malays to the state administration was minimal. They involved Malay rulers and chiefs who were co-opted into state functionaries as members of the State Councils and as officers such Assistant District Officers, tax collectors, and village headmen. These officers were not trained and they were recruited on an ad hoc basis; the appointment of Malay officers was to compensate for the loss of income incurred by Malay chiefs as a result of the dismantling of the feudal order. Mavis Puthucheary, The Politics of Administration (Kuala Lumpur, 1978), 10.

61. The scheme was initially called the “scheme for the Employment of Malays (Higher Subordinate Class)” but was renamed “Malay Probationer Scheme.” The boys were handpicked by the individual Resident and short-listed by the Resident General, then sent for three years to the Malay College, where they were trained in correspondence, treasury work, and other administrative subjects. The graduates were appointed to the Malay Administrative Service (MAS).

63. Memorandum on the principal differences between the 1910 and 1917 schemes, cited in ibid.

67. Dispatch, High Commisioner to Colonial Office, no. 682, 11 December 1923, in Letter, Association of British Malaya to Under-Secretary of State for Colonies, 27 June 1923, in Dispatches re Correspondence with the Association of British Malaya on the Administration and Finances of the Federated Malay States, appendix no. 4 to Federal Council Proceedings 1924, C94–95, in ibid., 117.

68. Clause 12 (viii) of the General Orders for FMS Government Esstablishments, as amended in 1923, stipulated that for posts requiring a knowledge of Malay but of no other language, preference should be given to Malays. Cited in ibid., 118.

In Arnold J. Toynbee, A Journey to China or Things Which Are Seen (London, 1931), 156. He said: “When I touched at the Straits Settlements on my way out east I realized that British Malaya was destined, by ‘peaceful penetration’ to become a new Chinese province, and I fancy, from what I have heard that the same destiny may be in store for Burma, Siam, French Indo China, Dutch Indonesia and the Philippines.” Cited in Emerson, Malaysia.

77. The Majaallah Guru (Teachers’ Magazine) mostly published articles about Malay underdevelopment. Eventually it became a major journal of reference. It drew readers beyond the teaching community who were encouraged by articles critical of British policies that hampered Malay economic and political progress.

84. Zaaba held an appointment at the influential Sultan Idris Training College (SITC); he also headed various Malay publications. Burhannuddin Helmy and Yaacob Ibrahi were graduates of SITC who became editors of Utusan Melayu and later led the left-wing Kesatuan Melayu Muda (KMM). Ishak Latiff was an ex-civil servant who became a journalist; he was one the founding members of the KMM. Onn Jaafar, who became a leading figure in Malay politics, was a member of the Johor State Council and also held editorial appointments at Warta Malaya and Lembaga Malaya. Eunos Abdullah was a member of the legislative council, president of the Kesatuan Melayu Singapura, and a key figure at Utusan Melayu.

90. Ibid. 18. KMM was influenced by the the Djong Djava and Jong Sumatra political struggle.

93. Under the support of the Japanese government, Ibrahim acquired the daily Malay newspaper Warta Malaya to launch propaganda against the British authority. In 1940, Ibrahim and a few of his followers, which included Ishak Mohamed, Ahmad Boestamam, and Sutan Djenain, were arrested and imprisoned by the British authorities. They were later released by the Japanese in 1942. Roff, The Origins of Malay Nationalism, 234. During the Japanese occupation, Ibrahim Yaacob worked closely with the Japanese forces and was made commander-in-chief of the Malay arms group called Pembela Tanahayer (Defenders of the Homeland) or PETA. See Soernarno, “Malay Nationalism,” 20.

96. In the 1930s, the British administration had floated the idea of citizenship rights to Chinese given the rise of Chinese transnationalism and the need to circumvent Chinese government citizenship rule of 1929 regarding the citizenship status of overseas Chinese.

98. After the Japanese surrendered, the MCP conducted its own “people’s court” in which suspected Japanese collaborators were rounded up and tried; if found guilty, they were summarily executed. MCP’s action took on an ethnic dimension. Its provocative moves targeted Malays, on the grounds of collaborating with the Japanese forces. Although there were Chinese among the collaborators, they were small in number. Malays and Indians, however, were employed by the Japanese and, unlike the Chinese, played a small role in the resistance against the Japanese. It was obvious to any observer at the time that the MCP self-styled execution would take on ethnic proportions. See Boon Kheng Cheah, “Some Aspects of the Interregnum in Malaya (14 August–3 September 1945),” Journal of Southeast Asian Studies 8, no. 1 (1977): 48–74, at 70.

99. McMichael was also reprimanding in action. He was given permission to check on the Malay rulers’ involvement during the Japanese war and, should he find them corroborating with the Japanese, was given the authority to recommend another Malay personage whom he deemed competent to sign the treaty.

102. On 21 August 1945, there were violent Chinese-Malay skirmishes in the district of Muar-Batu Pahat, in the Johor State, and the BMA reported that refugees in Muar amounted to ten thousand, whereas in Batu Pahat, there were four thousand. See Cheah, “Some Aspects of the Interregnum in Malaya,” 70.

104. Ertman, Birth of the Leviathan; Pierson, Increasing Returns, Path Dependence, and the Study of Politics; and Thelen, “How Institutions Evolve,” 219.