Democracy and Productivity: The Glass-Steagall Act and the Shifting Discourse of Financial Regulation 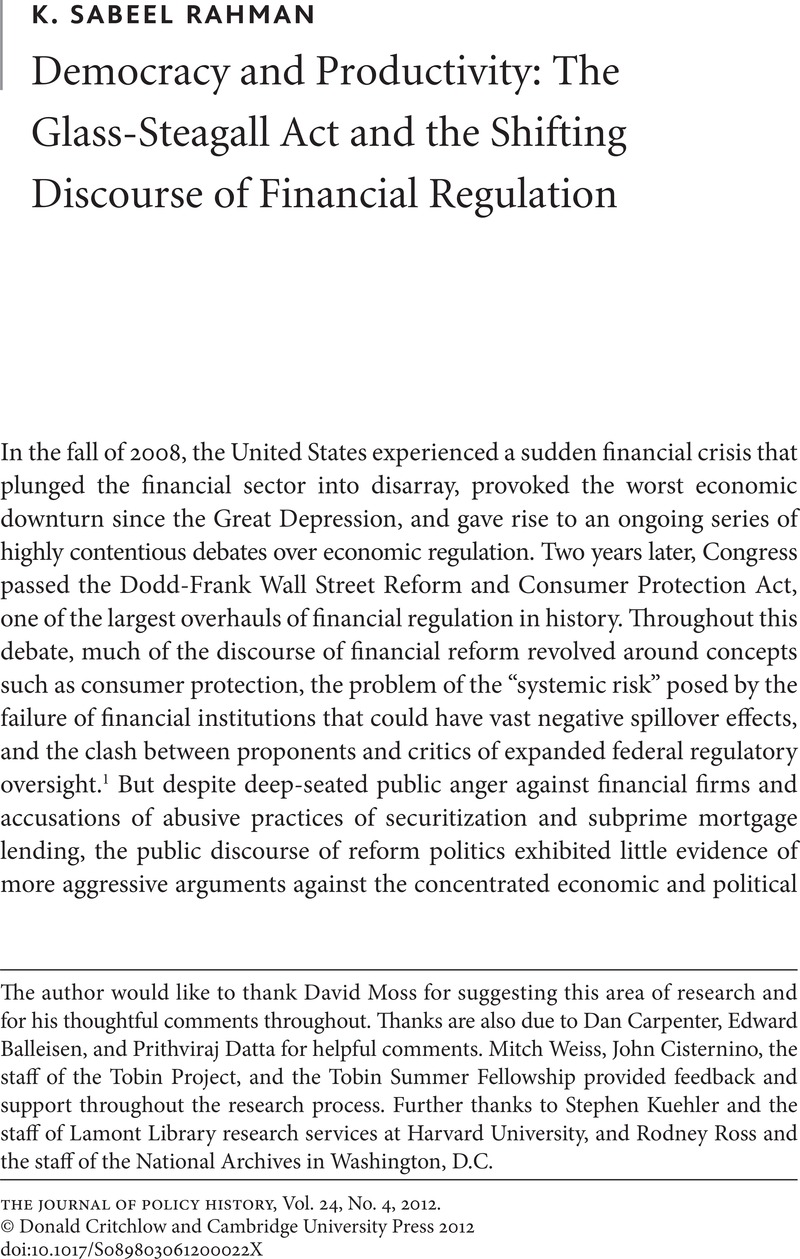 4. Specifically, Section 16 of the bill restricts the securities activities of national banks, especially by prohibiting them from underwriting corporate securities. Section 20 prohibits member banks of the Federal Reserve system from being affiliated with any entity involved in the sale or transactions of securities. Section 32 prohibits any officer, director, or employee links between member banks and other individuals engaged in securities firms. Section 21 outlaws any person engaged in securities activities to also engage at the same time in deposit banking to any extent. The Banking Act also strengthened the regulatory powers of the Federal Reserve Bank.

8. See, e.g., Benston, The Separation of Commercial and Investment Banking; Kroszner, Randall S. and Rajan, Raghuram G., “Organization Structure and Credibility: Evidence from Commercial Bank Securities Activities Before the Glass-Steagall Act,” Journal of Monetary Economics 39 (1997): 475–516; and Kroszner, and Rajan, , “Is the Glass-Steagall Act Justified? A Study of the U.S. Experience with Universal Banking Before 1933,” American Economic Review 84, no. 4 (September 1994): 810–32; Barth, James, Brumbaugh, R. Dan Jr., and Wilcox, James, “Policy Watch: The Repeal of Glass-Steagall and the Advent of Broad Banking,” Journal of Economic Perspectives 14, no. 2 (Spring 2000): 191–204.

11. Kelly, “Legislative History of the Glass-Steagall Act”; Perkins, “The Divorce of Commercial and Investment Banking.”

13. Much of the following legislative history is recounted in more detail in ibid.; and Perkins, “The Divorce of Commercial and Investment Banking.”

14. Perkins, “The Divorce of Commercial and Investment Banking,” 518.

18. It was noted at the time that the president of the New York bank, Bernard Marcus, had appropriated huge sums of bank funds for his own speculative ventures, which largely failed. The result was a huge wave of public attention and criticism, generating a new distrust of affiliates. See ibid., 497.

19. I am grateful to an anonymous reviewer for pointing this out.

23. I am grateful to an anonymous reviewer for pointing this out.

24. See Hammond, Brey, Banks and Politics in America: From the Revolution to the Civil War (Princeton, 1957). As Hammond writes, “Taking advantage of the traditional agrarian aversion to banks and of President Jackson’s particularly, the entrepreneurial rebels attacked what they called the monopoly and the tyranny of the federal Bank, ended its existence, neutralized the federal government’s constitutional responsibility for the currency, made banking a business free to all, and thereby insured to enterprise an abundance of bank and credit” (740–41).

29. For the cross-currents of Progressive thought more generally, and the tensions between these democratic antitrusters and more technocratic reformers, see Hofstadter, Richard, The Age of Reform (New York, 1974); and Rodgers, Daniel, “In Search of Progressivism,” Reviews in American History 10, no. 4 (1982).

33. As I will argue in Part IV, these Progressive narratives nevertheless played a vital background role in mobilizing support for the New Deal reforms.

34. Benston, The Separation of Commercial and Investment Banking,173–78. It is worth noting that Benston is in general critical of Glass-Steagall as being based on a faulty empirical understanding by the New Dealers themselves as to the nature of the 1929–33 banking crisis. Benston himself is part of the wave of studies attempting to delegitimize Glass-Steagall as a valid policy reform, arguing instead for its repeal in the 1980s and 1990s. I will address this push by Benston and others in Part V.

39. Perkins, “The Divorce of Commercial and Investment Banking,” 500. Perkins bases his characterization of Glass on Glass’s own writings in letters and his statements in the Congressional Record. See 500–502 and notes 40–42.

40. It is worth noting, however, that this view mischaracterizes Brandeis’s own argument. Brandeis’s attack on bigness did not necessarily mean a celebration of localism. As Philippa Strum argues, Brandeis instead called for firms and organizations that were large enough to ensure efficiency but small enough to be controlled by a democratic public. See Strum, , Brandeis: Beyond Progressivism (Lawrence, Kans., 1995) See also Brandeis’s written dissents in New State Ice Company v. Liebman (1931) and Liggett v. Lee (1933), in Strum, ed., Brandeis on Democracy(Lawrence, Kans., 1995), 138–53.

42. Glass, Hearings, 4 February 1931, 365. It is worth noting that Glass took the opportunity in the hearings to castigate some witnesses who years earlier had opposed the Federal Reserve Act as a threat to individualism and commerce, but who now appeared before the subcommittee accepting of the Federal Reserve as a vital component of the national financial system. See Hearings, 17 February 1931, 417–18.

58. Keller, 22 May 1933, 77 Congressional Record,3913. Congressman Keller was a Democrat of Illinois. It is interesting to note that these opponents were also challenging the notion of central bank independence, concerned that the removal of the Treasury Secretary from Federal Reserve Board membership and the provisions enabling the Fed to retain any profits from its own reserves rather than funneling them to the Treasury would create an institution dangerously free to pursue the private, rather than public, interest. As Keller continued: “It [the Federal Reserve Bank] is entirely privately owned. It does not belong to the people of the United States or to the United States Government—not one dollar of it.”

67. Hearings, Subcommittee of the Committee on Banking and Currency, “Operation of National and Federal Reserve Banking Systems. U.S. Senate, 71st Cong., 1st sess., Appendix, 999–1058. It should be noted that actually small banks failed more and the key issue for bank stability as a policy matter was in fact the establishment of deposit insurance. But Glass used these findings to push his vision of bigger national-scale banks that were stripped of their securities affiliates—thus avoiding the conflicts of interest that arose from affiliate activities, but retaining the financial and economic benefits of larger, more centralized banks.

88. Benston, The Separation of Commercial and Investment Banking.

89. Kroszner and Rajan, “Organization Structure and Credibility,” and “Is the Glass-Steagall Act Justified?”

90. See Barth et al., “Policy Watch,” 2000. It is remarkable how the arguments for the repeal of Glass-Steagall echoed those offered by the banking sector in 1932–33: it was argued that combining commercial and investment banking was safe, would provide greater consumer choice and options, while further regulation would simply constrain the ability of banks to help finance productive economic development.

92. Simon Johnson, “Why Don’t the Community Banks Get It?”

93. “ABA Testifies on Proposal to Create a Consumer Financial Protection Agency,” News Release, 24 June 2009, http://www.aba.com/Press+Room/062409ABATestifiesCFPA.htm. 2009; Johnson, “Why Don’t the Community Banks Get It?

97. Indeed, a cursory look at some of the empirical literature building up to the repeal of Glass-Steagall in 1999 exhibits a preoccupation with the explicit economic arguments offered by Glass-Steagall proponents in 1933, rather than the underlying democratic accountability arguments offered by Brandeis and others. The arguments for the repeal of Glass-Steagall seem to echo those offered by the banking sector in 1932–33: it was argued that combining commercial and investment banking was safe, would provide greater consumer choice and options, while further regulation would simply constrain the ability of banks to help finance productive economic development. Some studies in the 1990s suggested that securities affiliates were not in fact selling risky assets, and were less likely to fail. Market pressures, it was argued, forced banks to self-regulate by offering higher-quality securities, rather than engaging in risky speculation. If Glass-Steagall is premised on the need to prevent such speculation and bank failure through regulation, then it would seem that on economic grounds, regulation had become a constraint rather than enabler of productivity. See Benston, The Separation of Commercial and Investment Banking; Kroszner and Rajan, “Organization Structure and Credibility,” and “Is the Glass-Steagall Act Justified?”; and Barth et al., “Policy Watch.”

The author would like to thank David Moss for suggesting this area of research and for his thoughtful comments throughout. Thanks are also due to Dan Carpenter, Edward Balleisen, and Prithviraj Datta for helpful comments. Mitch Weiss, John Cisternino, the staff of the Tobin Project, and the Tobin Summer Fellowship provided feedback and support throughout the research process. Further thanks to Stephen Kuehler and the staff of Lamont Library research services at Harvard University, and Rodney Ross and the staff of the National Archives in Washington, D.C.

Democracy and Productivity: The Glass-Steagall Act and the Shifting Discourse of Financial Regulation