Attention has recently been focused on the freezing method for de-watering waste-water sludge (Katz and Mason, 1970; Garinger, unpublished) as an economical treatment method in northern areas. The basic idea is that freezing waste-water sludge can be accomplished in a lagoon or by a layer freezing technique using natural freezing. Laboratory experiments (sec Garinger, unpublished, for a recent review) have shown that upon thawing, the sludge particles settle rapidly leaving a clear supernatant which can be pumped or drained away thus separating the sludge particles from the water. Unfortunately the details of the process of sludge conditioning by freezing which leads to excellent de-watering characteristics upon thawing are not understood. A first step towards understanding sludge conditioning during freezing was to determine the structural features of waste-water sludge ice.

During the spring of 1971, an experiment was performed to determine the structural features of waste-water sludge ice. Approximately 0.10 m3 of activated sludge from a biological waste treatment plant was frozen out-of-doors in a 0.6 m X 0.6 m X 0.6 m box. When the sludge was completely frozen, four cores were obtained with a SIPRE 7.5 cm diameter corer. Thin sections were prepared from these cores and examined in both ordinary light and polarized light to determine the crystalline features of the sludge ice.

Each core contained relatively clear ice in the upper portion (≈ 0.20 m) and “black ice” frozen from settled sludge in the lower portion (≈ 0.30 m). Figure 1 is a thin section prepared from the clear-ice portion of a core. The clear ice crystals have a substructure consisting of irregularly shaped ice cells which are ≈ 1 mm2 in cross-sectional area and large sludge particles which appear between the ice cells. These sludge particles in the ice phase are several times larger than the sludge particles in the liquid sludge prior to freezing. A similar substructure exists in sea ice and in laboratory ice formed from aqueous solutions (Harrison and Tiller, 1963). 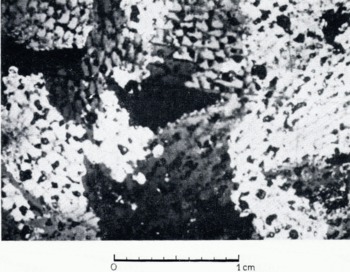 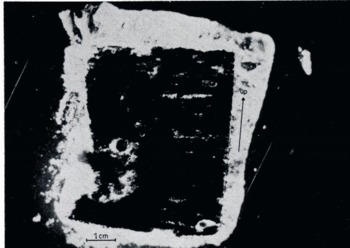 Vertical thin section of waste-water sludge ice taken from the “dirty ice” region and photographed in ordinary light. The section has its long side vertically oriented and clear ice around the edges of the section was used to freeze the section in position.

Figure 2 is a thin section prepared from the “black ice” in the lower portion of a core. This ice appears to be similar to ice formed in soils and several small, horizontal ice lenses can be seen in the thin section.

When frozen sludge is thawed, it has very good de-watering characteristics as determined from settling rates when compared to sludge which has not been frozen. The de-watering characteristics of frozen sludge have been attributed to trapping, coagulation and dehydration of sludge particles in the ice during the freezing process (Garinger, unpublished). The importance of the structure of the waste-water sludge ice as determined from Figure 1 and 2 is that it provides a starting point to develop theories of sludge conditioning during freezing. Two separate but related theories are needed: one for the clear ice region and one for the “black ice” region. The thin section shown in Figure 1 from the clear ice region is evidence that ice cells exist at the ice-liquid interface during growth of the clear sludge ice and that sludge particles are trapped and forced into close contact in the grooves between these ice cells. This “results” in coagulation of the sludge particles although further details are not clear.

In addition, the sludge-ice structure as shown in Figure 2 when considered with information on ice lens formation in soils (see Scott, 1969, for a recent review) may provide a starting point to develop a theory of sludge conditioning during freezing in the “black ice” region.

Obviously more experimentation will be necessary to clarify the details of the physical processes involved before more complete theories can be developed. The purpose of this letter is to bring this interesting problem to the attention of glaciologists, since it has not been discussed in the glaciological literature.