Experience with the calibration and field use of mercury-in-glass calorimeter thermometers provides an indication of the accuracy attainable and the necessary corrections to obtain that accuracy. Secular changes as large as 57 mK have been observed during the first three years of thermometer use. Light physical tapping is found to reduce the thermometer readings by 3–6 mK. Corrections for variations in the external and internal bulb pressure and care to avoid parallax are necessary to obtain the best accuracy in field measurements. The best accuracy obtainable with these thermometers for temperature measurements near 0°C is approximately ±4 mK for laboratory measurements and ±5 mK for field measurements.

Some glaciological problems require temperature measurements near the ice-point (IP) to accuracies of 10 mK or better. Such measurements can be difficult and expensive. Examples are laboratory measurements of the freezing-point depressions of dilute aqueous solutions and field measurements of supercooled water temperatures in rivers. Mercury-in-glass calorimeter thermometers offer a relatively simple, cheap, reliable, and accurate means for determining these temperatures. This paper reviews experience with the calibration and field use of four such thermometers.

The thermometer scale ranges from +1 to −1°C over a length of c. 250 mm. The smallest scale division is 5 mK. An expansion chamber is provided at the top of the capillary bore. The bulb is 70 mm in length and 7 mm in diameter. These thermometers can be read to a precision of about 2–3 mK without a magnifier.

All calibrations were carried out in IP cells or in triple-point (TP) cells. The TP of water is defined as + 0.010 o°C and this temperature can be reproduced to 5 × 10−5 K (Beattie and others, 1938), which is much smaller than the sensitivity of the thermometers. Consequently, no calibration corrections were applied to the TP cell temperatures. The temperature T, in °C, in an IP cell at a distance h in mm below the surface of the water is, according to Beattie and others (1937)

where K is the specific electrical conductance of the water in the cell in units of μS cm−1 measured at 0°C. It is assumed that the water used in preparing the cell has been saturated with air at 0°C and a barometric pressure of P in mm of mercury. The IP cells used in the calibrations were prepared from ice cubes of de-ionized water which were ground into fine ice with a commercial blender. The ice was packed into a one-liter. Dewar, although in a few cases a four-liter Dewar was used. De-ionized water was added until the ice floatcd and then the excess water was decanted and more ice was added to the Dewar. Special care was taken to clean all containers and utensils to prevent contamination of the cells. The IP cells were allowed to stand for c. 1 h to equilibrate before use. In some cases, barometric pressure at the time of calibration was measured. In most cases, when the calibration was completed a sample of a few milliliters of water was withdrawn and its electrical conductivity measured. These conductivities averaged 4 μS cm−1 at 0°C. Using Equation (1), the temperature in the IP cells was estimated to be 0°C±1 mK. 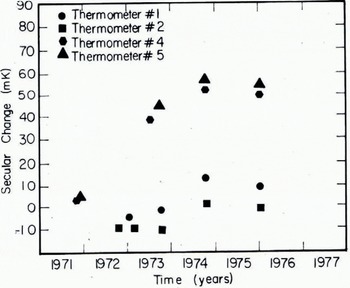 Fig. 1. Secular change versus time for thermometers 1, 2, 4, and 5. The secular change, ΔT = T 0— T, where T 0 is the observed temperature and T is the calibration temperature.

When the thermometers were used in the field, they were calibrated periodically in the laboratory with TP or IP cells and then transported to the field site. For some applications it may be desirable to do the TP or IP calibrations at the field site. Calibration corrections are not required when using TP cells, however, certain situations may require calibration corrections for even carefully prepared IP cells. For example, if the laboratory and field site are at high elevation or if the laboratory and field site are separated by a large altitude difference, the pressure correction may become significant. Equation (1) predicts a change of c. 1 mK for a change in elevation of 1 km (from sea-level).

The most significant thermometer corrections in the field are secular changes, changes produced by variations in bulb pressure, and the effects of parallax on the readings. Secular changes, such as those shown in Figure 1, were taken into account by frequent calibrations in the TP or IP cells. Changes in bulb pressure can be external or internal. Such changes were evaluated using Wise’s (1976) value of the pressure coefficient, 0.1 K atmos−1. A change of external or internal pressure of 10 mm of mercury can produce a change of c. 1.3 mK in the thermometer reading. This pressure variation can be produced by a change in elevation of c. 1o6m from sea-level, the passage of weather fronts, or tilting the thermometer from the vertical position when the reading is taken (assuming the thermometer was calibrated in the vertical position). Laboratory experience has shown that if care is not taken with the readings, parallax may produce errors of a few mK. The required corrections can be substantial in certain cases. For example, a 20 mm of mercury increase in barometric pressure coupled with tilting the thermometer 45° from the vertical would require a correction of c. 9 mK to the reading. It is estimated that the best accuracy obtainable in the field with these thermometers for measurements near 0°C is about ±5 mK and that this level of accuracy requires careful consideration of the factors cited herein.

This research was partially supported by the Earth Science Section, National Science Foundation, NSF Grant GA-30748. I wish to thank Mr R. E. Gilfilian for his help with the laboratory and field measurements. The final draft of this manuscript was prepared while I was on leave at the U.S. Army CRREL, Hanover, N.H., U.S.A. and I wish to thank the personnel there for making their facilities available to me.