Male Prostitution and the London GPO: Telegraph Boys’ “Immorality” from Nationalization to the Cleveland Street Scandal 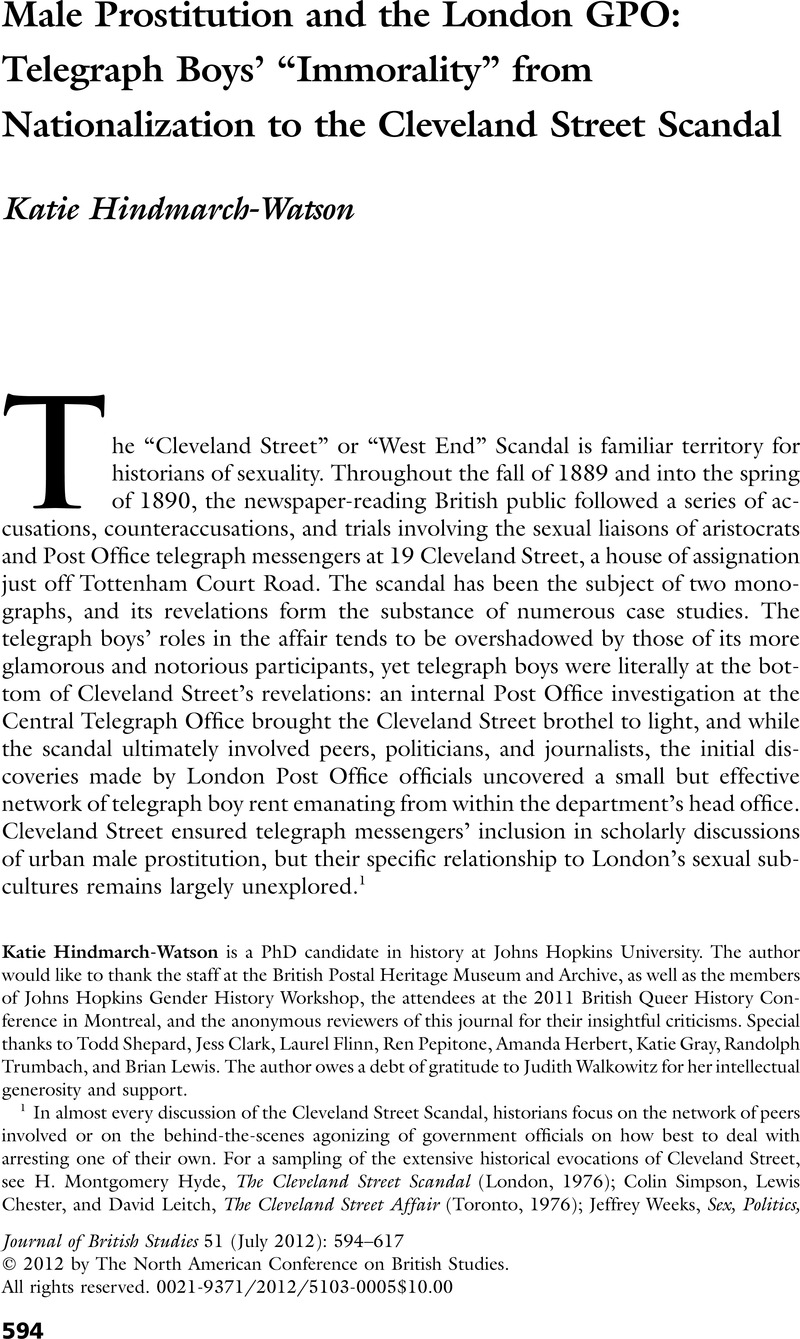 1 In almost every discussion of the Cleveland Street Scandal, historians focus on the network of peers involved or on the behind-the-scenes agonizing of government officials on how best to deal with arresting one of their own. For a sampling of the extensive historical evocations of Cleveland Street, see Hyde, H. Montgomery, The Cleveland Street Scandal (London, 1976); Simpson, Colin, Chester, Lewis, and Leitch, David, The Cleveland Street Affair (Toronto, 1976); Weeks, Jeffrey, Sex, Politics, and Society: The Regulation of Sexuality since 1800 (London, 1981), chap. 5; Aronson, Theo, Prince Eddy and the Homosexual Underworld, 2nd ed. (London, 1996); Fisher, Trevor, Scandal: Sexual Politics in Late Victorian Britain (Stroud, 1995); Cocks, H. G., Nameless Offences: Homosexual Desire in the Nineteenth Century (London, 2003), 144–53. A notable exception is Kaplan’s, MorrisSodom on the Thames: Sex, Love, and Scandal in Wilde Times (Ithaca, NY, 2005), chap. 3.

10 For a comparable study of late Victorian telegraph boys in the United States, see Downey, Gregory, Telegraph Messenger Boys: Labor, Technology, and Geography, 1850–1950 (New York, 2002). Downey looks at the Nationwide Western Union system across the span of 100 years and argues that telegraph messengers “served different functions at different moments—sometimes working as technological components themselves, sometimes being sold as commodities along with the telegrams they carried, and sometimes acting as agents of change within the technological network itself” (7). This article takes inspiration from Downey in fleshing out the wider significance of telegraph boy labor and the wider machinations of the telegraph system. In the British case, however, the contours of the telegraph and its labor force are bound with the state’s investment in the system (in the United States the telegraph was never nationalized). And in London, the telegraph system, thanks to its messengers, served a unique role in urban male homoerotic communities, an arrangement absent from Downey’s evidence.

14 To avoid a lengthy historiographic summary, what follows is a handful of the most influential works on the history of Victorian British male homosexuality, with an emphasis on more recent contributions: Weeks, Jeffery, Sex, Politics and Society, and Between the Acts: Lives of Homosexual Men, 1885-1967 (London, 1990); Eve K. Sedgwick, , Epistemology of the Closet (Berkeley, 1990); Mort, Frank, Dangerous Sexualities: Medico-Moral Politics in England since 1830 (London, 1987); Cocks, Nameless Offences; Cohen, Ed, Talk on the Wilde Side: Toward a Genealogy of a Discourse on Male Sexualities (London, 1993); Cook, Matt, London and the Culture of Homosexuality, 1885–1914 (Cambridge, 2003); Brady, Sean, Masculinity and Male Homosexuality in Britain, 1861–1913 (New York, 2005); Upchurch, Charles, Before Wilde: Sex between Men in Britain’s Age of Reform (Berkeley, 2009).

15 Foucault, “Governmentality;” Joyce, The Rule of Freedom; Otter, , “Making Liberalism Durable,” “Civilizing Slaughter,” The Victorian Eye, and “Making Liberal Objects”; Gilbert, Pamela, Mapping the Victorian Social Body (Albany, NY, 2004); Poovey, Mary, A History of the Modern Fact: Problems of Knowledge in the Sciences of Wealth and Society (Chicago, 1998). See also Gunn, Simon, The Public Culture of the Victorian Middle Class: Ritual and Authority and the English Industrial City, 1840–1914 (Manchester, 2000). In addition to Joyce and Otter, see Morus, Iwan Rhys, “The Nervous System of Britain: Space, Time and the Electric Telegraph in the Victorian Age,” British Journal for the History of Science 33, no. 4 (December 2000): 455–75; for foundational texts on technology and culture, see Latour, Bruno, We Have Never Been Modern, trans. Porter, Catherine (Cambridge, MA, 1993), and “Technology Is Society Made Durable,” in A Sociology of Monsters: Essays on Power, Technology and Domination, ed. John Law (London, 1991), 103–31.

21 Report by the controller, London Postal Section, on the appearance of boy messengers, 27 November 1891, BPHMA, POST 61/7.

23 See Hilton, Matthew, “‘Tabs,’ ‘Fags,’ and the ‘Boy Labour Problem’ in Late Victorian and Edwardian Britain,” Journal of Social History 28, no. 3 (Spring 1995): 587–607. Hilton argues that working-class boys’ smoking became a serious concern in the 1880s and 1890s after cigarettes became cheaper and widely available. This example demonstrates that boy smoking had a longer history. This telegraph boy was likely smoking a pipe rather than a cigarette.

39 Cocks, Nameless Offences, introduction and chaps. 1 and 2; for reflections on this phenomenon in relation to Victorian masculinities, see Brady, Masculinity and Male Homosexuality in Britain.

47 This is a standard trope referred to by Victorian historians. For a study detailing specifically with the sexual contexts of environmental contagion, see Mort, Dangerous Sexualities, introduction, 49–54, and 64–66.

60 For more examples and analysis of how both those accused of sodomy and the legal system grappled with issues of evidence and corroboration, see Cocks, H. G., “Making the Sodomite Speak: Voices of the Accused in English Sodomy Trials, c. 1800–98,” Gender and History 18, no. 1 (April 2006): 87–107.

72 See, e.g., Deborah Nord, “The Social Explorer as Anthropologist.” For a recent example of the intersections between slumming and sexuality, see Koven, Seth, Slumming: Sexual and Social Politics in Victorian London (Princeton, NJ, 2006).

74 For a broader description of covert police activity in this period in which the Missing Letter Branch/Confidential Enquiry Branch participated, see Porter, Bernard, The Origins of the Vigilant State: The London Metropolitan Police Special Branch before the First World War (London, 1987).

Male Prostitution and the London GPO: Telegraph Boys’ “Immorality” from Nationalization to the Cleveland Street Scandal