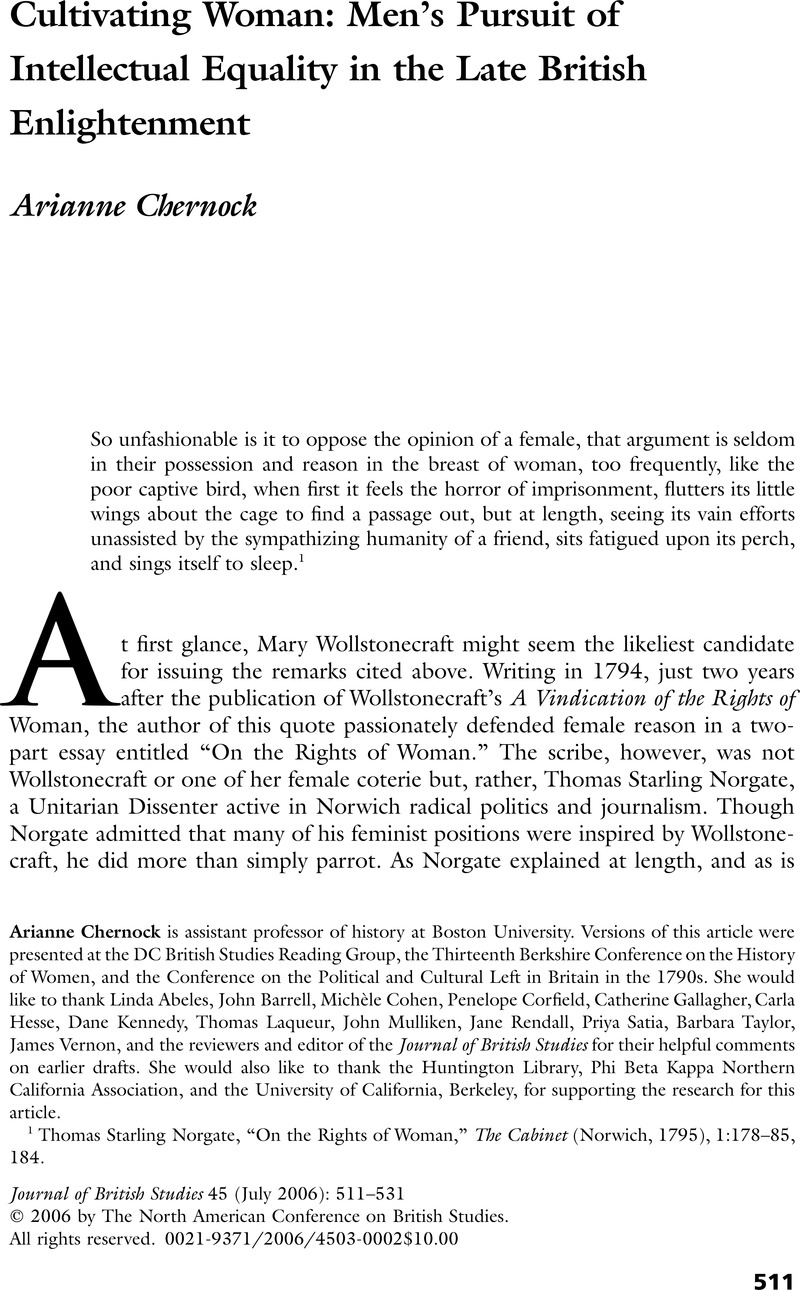 2 Barbauld, Anna, “The Rights of Woman,” in Selected Poetry and Prose, ed. McCarthy, William and Kraft, Elizabeth (Peterborough, Ontario, 2002), 130–31. Barbauld herself, however, benefited from attending a number of lectures at Warrington Academy, where her father was an instructor and her brother received his education.

4 The term “feminist” is, of course, anachronistic; “feminism” was not introduced into the English language until the late nineteenth century. That the term is anachronistic, however, does not mean that it is inappropriate, for these men and women did see themselves as engaged in the project of “challenging male hegemony”—a definition of “feminism” recently put forward by Karen Offen, in a talk titled “Thoughts on Writing the History of European Feminisms (1700–1950)” (presented at the Huntington Women's Studies Seminar, Huntington Library, San Marino, CA, 13 March 2004).

5 For just a few recent examples of works highlighting women's almost exclusive role in eighteenth-century feminist activity, see Bruder, Helen, William Blake and the Daughters of Albion (New York, 1997); Porter, Roy, The Creation of the Modern World: The Untold Story of the British Enlightenment (New York, 2000); and Stafford, William, English Feminists and Their Opponents in the 1790s: Unsex’d and Proper Females (New York, 2002). At the same time, many scholars have paved the way for my research into the collaborative dimensions of early feminism. See esp. Michèle Cohen, “‘To think, to Compare, to Combine, to Methodise’: Notes towards Rethinking Girls’ Education in the Eighteenth Century,” in Taylor and Knott, Women, Gender and Enlightenment, 224–42; Gleadle, Kathryn, The Early Feminists: Radical Unitarians and the Emergence of the Women's Rights Movement, 1831–1851 (New York, 1995); Guest, Harriet, Small Change: Women, Learning, Patriotism, 1750–1810 (Chicago, 2000); St. Clair, William, The Godwins and the Shelleys (London, 1989); Strauss, Sylvia, “Traitors to the Masculine Cause”: The Men's Campaigns for Women's Rights (Westwood, CT, 1982); Stuurman, Siep, François Poulain de la Barre and the Invention of Modern Equality (Cambridge, MA, 2004); Taylor, Barbara, Mary Wollstonecraft and the Feminist Imagination (Cambridge, 2003); and Watts, Ruth, Gender, Power and the Unitarians in England, 1760–1860 (London, 1998).

6 Bruder, William Blake and the Daughters of Albion, 93. Bruder does acknowledge, however, that “there was a small coterie of radicals who did attempt to champion the rights of women” (93).

7 See Scott, Joan Wallach's classic essay, “Gender: A Useful Category of Historical Analysis,” in her Gender and the Politics of History (New York, 1988), 28–50.

8 I am indebted to Alice Browne for the distinction between “instrumentalist” and “egalitarian” feminisms. See Browne, Alice, The Eighteenth-Century Feminist Mind (Brighton, 1987).

15 For background information on Wright, 's work, see his own A Review of the Missionary Life and Labors of Richard Wright: Written by Himself (London, 1824) as well as his unpublished “Autobiography,” Harris Manchester College, Oxford, MS Wright 11. For Addison's comment, see Joseph Addison, The Spectator 2, no. 215 (November 1711): 338.

20 See Gleadle, , The Early Feminists, and “British Women and Radical Politics in the Late Nonconformist Enlightenment, c. 1780–1830,” in Women, Privilege and Power, ed. Vickery, Amanda (Stanford, CA, 2001), 123–51; Plant, Helen, “Gender and the Aristocracy of Dissent: A Comparative Study of the Beliefs, Status and Roles of Women in Quaker and Unitarian Communities, 1770–1830, with Particular Reference to Yorkshire” (DPhil thesis, University of York, 2000); Taylor, Mary Wollstonecraft and the Feminist Imagination; and Watts, Gender, Power and the Unitarians in England, 1760–1860. Holt, Raymond's older The Unitarian Contribution to Social Progress in England (London, 1938) also contains a limited discussion of the feminist strands in Unitarian thinking.

27 Malkin, Essays on Subjects Connected with Civilization, 5. From 1809 to 1828, Malkin served as headmaster of the grammar school at Bury St. Edmunds. In 1830, he became a professor of history at the University of London.

30 Botany, although a science, was seen by many as suitable for female study. According to Ann B. Shteir, the very name “Flora” “resonates with traditional associations from myth and literature that link flowers and gardens with women and nature and with femininity, modesty, and innocence. During the eighteenth and nineteenth centuries, cultural linkages like these helped smooth the path for women into botanical work of many kinds” (Cultivating Women, Cultivating Science: Flora's Daughters and Botany in England, 1760 to 1860 [Baltimore, 1996], 3). This is not to suggest that botany was an uncontroversial subject of study. Anti-Jacobin author Richard Polwhele denounced “botanizing girls” in his 1798 poem The Unsex’d Females and linked the study of plants with the study of human sexuality.

31 Cohen, Michèle, “The Curriculum and the Construction of Gender Difference in England and France, 1780–1870” (paper presented at the Berkshire Conference on the History of Women, Scripps College, Claremont, CA, June 2005), 4.

35 David Steuart Erskine (Lord Buchan), “On Female Education,” The Bee, 22 June 1791, reprinted in The Anonymous and Fugitive Essays of the Earl of Buchan, Collected from Various Periodical Works (Edinburgh, 1812), 29. The Bee, published by Dr. James Anderson, began publication in December 1790. Erskine contributed over 130 articles to the publication, many of which addressed female education and women's rights more generally. For more information on Erskine's life, see Lamb, James Gordon, “David Steuart Erskine, 11th Earl of Buchan: A Study of his Life and Correspondence” (DPhil thesis, University of St. Andrews, 1963).

37 Knox, Liberal Education, 330. According to Cohen, Liberal Education went through ten editions in the ten years following its first publication; see her “To think, to Compare, to Combine, to Methodise,” 239.

40 Priestley, Joseph, Reflections on Death: A Sermon, on Occasion of the Death of the Rev. Robert Robinson, of Cambridge, Delivered at the New Meeting in Birmingham, June 13, 1790 (Birmingham, 1790), 23.

42 Thomas Beddoes's biographer, Stansfield, Dorothy A., observes in Thomas Beddoes, M.D., 1760–1808 (Dordrecht, 1984), 190, that the scientist believed women “to be capable of a higher standard of intellectual achievement than was usually allowed them” and accordingly designed his lectures for both sexes. Bentley supposedly “drafted a scheme for the improvement of female education which, when read by some friends in manuscript, was much commended” (, R. B., Thomas Bentley, 1730–1780, of Liverpool, Etruria, and London [Guildford, UK, 1927], 25). Unfortunately, the manuscript was never published. Darwin, Erasmus wrote A Plan for the Conduct of Female Education in Boarding Schools (Derby, 1797), which recommended that girls receive training in chemistry. James Keir wrote a “Dialogue on Chemistry between a father and a daughter.” For background information on the Lunar Society as a whole, see Uglow, Jenny's intelligent group biography, Lunar Men: Five Friends Whose Curiosity Change the World (New York, 2003).

46 Anderson, John, Extracts from the Latter Will and Codicil of Professor John Anderson (Glasgow, 1796), 16–17. For general background information on John Anderson and Anderson's Institution, see Sexton, A. Humboldt, The First Technical College: A Sketch of the History of “The Andersonian,” and the Institutions Descended From It, 1796–1894 (London, 1894); and Muir, James, John Anderson Pioneer of Technical Education and the College He Founded (Glasgow, 1950).

48 See Anderson, John's own description of his courses at the University of Glasgow in his Institutes of Physics (Glasgow, 1777). While women may not have been in attendance at these early lectures (the evidence is inconclusive), they were certainly never far from Anderson's mind. In writing his will in 1796, Anderson explicitly drew on his experience teaching laborers to conclude that women could also become “distinguished in a high degree, for their general knowledge, as well as for their abilities and progress in their several arts” (Extracts from the Latter Will, 16–17).

53 Garnett, Observations on a tour through the Highlands, 2:202.

54 As Smith, Sarah J. notes (“Retaking the Register: Women's Higher Education in Glasgow and Beyond, c. 1796–1845,” Gender and History 12, no. 2 [July 2000]: 326), the Ladies Courses were an “important introduction for thousands of women (and working men) to the previously inaccessible realm of higher education.”

58 Garnett, Observations on a tour through the Highlands, 2:205.

61 The insistence on female higher education as preparation for wifedom and motherhood would be a mainstay of Victorian discourse. For an analysis of the nineteenth-century context for the education debate, see Jordan, Ellen, “‘Making Good Wives and Mothers?’ The Transformation of Middle-Class Girls’ Education in Nineteenth-Century Britain,” History of Education Quarterly 31, no. 4 (Winter 1991): 439–62.

62 As Uglow observes in Lunar Men, the Lunar men “saw their sons as potential captains of industry or engineers or chemists or doctors” and their daughters, though educated in the most difficult sciences, “plainly as future wives and mothers” (313).

67 Hayley, William Esq., A Philosophical, Historical and Moral Essay on Old Maids: By a Friend to the Sisterhood (London, 1785), xiii, xvi. See Guest, Small Change, 95–151, for an extensive discussion of Elizabeth Carter as “learned lady” and “public spectacle.” Harcstark, Sylvia also provides an illuminating discussion of the bluestocking women in her The Bluestocking Circle: Women, Friendship, and the Life of the Mind in Eighteenth-Century England (Oxford, 1990).

68 Gregory, John M.D., A Father's Legacy to his Daughters (London, 1774), 31–32. According to the British Library Public Catalogue, this book went through over twenty-two printings between its first publication in 1774 and 1828.

69 See Taylor, “Feminists versus Gallants,” for further discussion and dissection of these sometimes subtle distinctions.

71 Knox, Essays Moral and Literary, 332. Knox's statement may have been a direct reference to Dr. Johnson's earlier description of the bluestocking Elizabeth Carter: “My old friend, Mrs. Carter, could make a pudding as well as translate Epictetus from the Greek and work a handkerchief as well as compose a poem” (cited in Adburgham, Alison, Women in Print: Writing Women and Women's Magazines From the Restoration to the Accession of Victoria [London, 1972], 135).

74 Thomas Poole to Mrs. Haskins, 22 September 1794, reprinted in Thomas Poole and His Friends (London, 1888), 98. The Pantisocrats sought to establish an egalitarian community in America, along the lines of the settlement planned by Joseph Priestley and Thomas Cooper on the banks of the Susquehanna River in Pennsylvania. For additional background information on the Pantisocrats, see William St. Clair, The Godwins and the Shelleys; MacGillivrary, J. R., “The Pantisocracy Scheme and Its Immediate Background,” in Studies in English, by Members of University College, Toronto, ed. Wallace, Malcolm W. (Toronto, 1931), 131–69.

78 See Hume, David, Essays, Moral and Political (London, 1748). For an analysis of the role of the salonnière as handmaiden to the production of knowledge in eighteenth-century France, see Goodman, Dena, The Republic of Letters: A Cultural History of the French Enlightenment (Ithaca, NY, 1994).

79 Cited in Platts, John, ed., The Female Mentor; or Ladies’ Class-Book: Being a New Selection of Three Hundred and Sixty-Five Reading Lessons, Relating to the Education, Characteristics, and Accomplishment of Young Women (Derby, 1823), 18–19.

81 Enfield, William, review of A Vindication of the Rights of Woman, by Mary Wollstonecraft, Monthly Review 8 (June 1792): 198; emphasis mine.

84 Erasmus Darwin, A Plan for the Conduct of Female Education in Boarding Schools, 11.

88 Wright, Richard, “Letter VII on Women,” Universalist's Miscellany 5 (August 1801): 305. It is possible that this “female astronomer” was Caroline Herschel.

93 David Steuart Erskine, “On Female Education,” The Bee, 20 July 1791, reprinted in the The Anonymous and Fugitive Essays, 46.

94 Lawrence, The Empire of the Nairs; or the Rights of Women, 3:40. Although not explicitly indebted to Hamilton, Elizabeth's earlier Translation of the letters of a Hindoo Rajah (London, 1796), Lawrence similarly draws on Indian culture to provide a sometimes scathing social commentary about English mores.

100 See Malkin, Essays on Subjects Connected with Civilization, 262–63. Malkin believed that although the sexes shared “the same capacity of mind,” their occupations in life were “necessarily different.”

104 Thompson, William, Appeal of One Half the Human Race, Women, Against the Pretensions of the Other Half, Men (London, 1825), xiii.