The missing in the aftermath of war: When do the needs of victims' families and international war crimes tribunals clash? 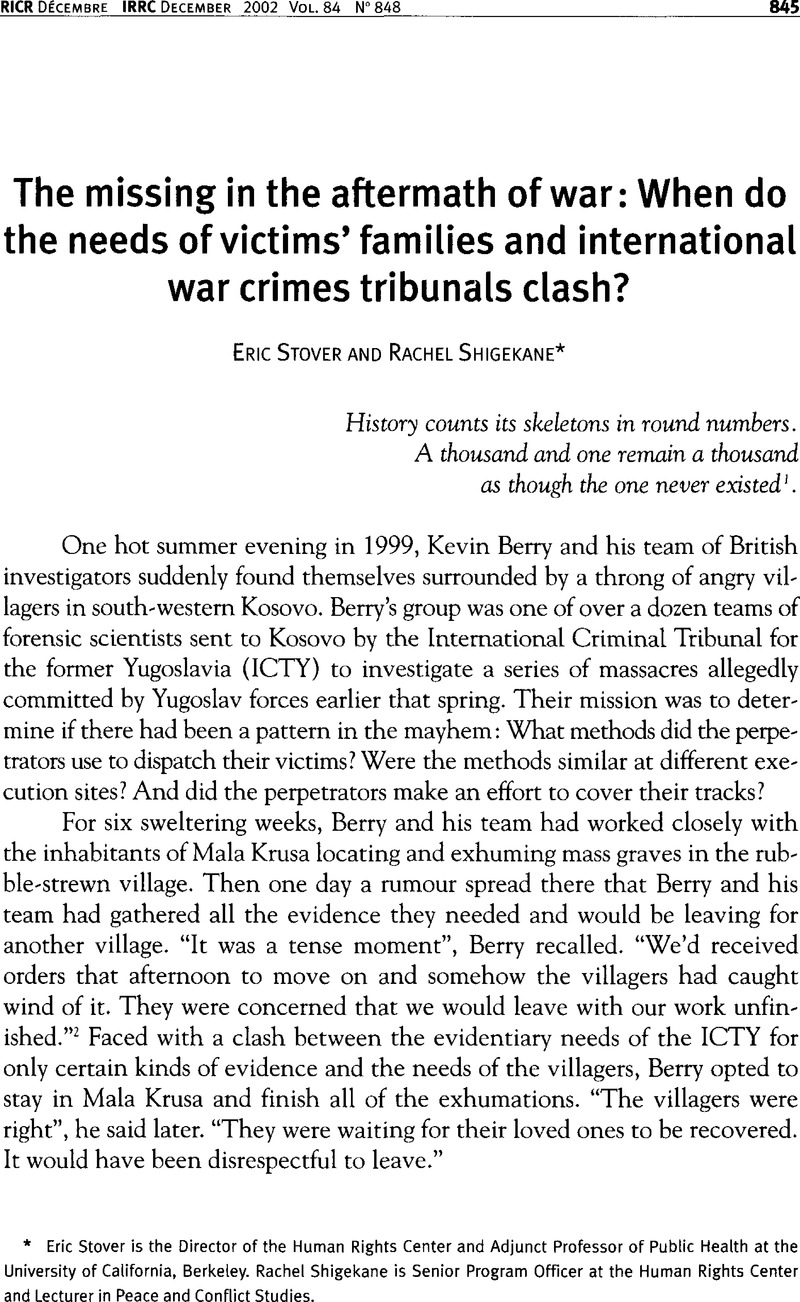 2 Kevin Berry was interviewed by one of the authors (Stover) for National Public Radio in July 1999. Also, see Abrahams, Fred, Peress, Gilles, and Stover, Eric, A Village Destroyed: May 14, 1999, War Crimes in Kosovo, University of California Press, Berkeley, CA, 2002.

4 Protocol Additional to the Geneva Conventions of 12 August 1949, and relating to the Protection of Victims of International Armed Conflicts, of 8 June 1977 (hereinafter Protocol I), Art. 32.

5 Convention on the Prevention and Punishment of the Crime of Genocide, 78 U.N.T.S. 277, adopted by Resolution 260 (III) A of the General Assembly of the United Nations on 9 December 1948 Art.2.

9 In its Judgment, the Tribunal noted that: “The evidence is overwhelming that abusive treatment and inhuman conditions in the camps were standard operating procedure (…). Many detainees perished as a result of the inhumane conditions, in addition to those who died asa result of the physical violence inflicted upon them.” See The Prosecutor v. Kvocka et al.: Judgment, International Criminal Tribunal for the former Yugoslavia, Case No. ICTY IT-98–30/1, 2 11 2001.

15 As of October 2002, 108 individuals are currently in proceedings before both the Rwandan and Yugoslav tribunals. So far, 41 accused have been tried, of whom 35 have been found guilty. See the International Criminal Tribunal for the former Yugoslavia at <http://www.un.org/icty/> and the International Criminal Tribunal for Rwanda at <http://www.ictr.org>.

28 In The Missing: ICRC Report (Summary of the Conclusions Arising from Events Held prior to the International Conference of Governmental and Non-governmental Experts, 19–21 February 2003 the ICRC states: “A death certificate alone might not be enough to induce belief in the death of a missing person. The authorities that issue death certificates have a responsibility, as does the ICRC when it delivers information on death, to ensure the authenticity of the information contained therein; the certificates should include information on the cause of death and the availability of the human remains.”

29 See the website of the International Commission of Missing Persons, <http://www.ic-mp.org/icfact.asp>.

30 Edward Huffine (personal communication), International Commission of Missing Persons, 29 September 2002. According to Huffine, the total number of positive identifications of the Srebrenica dead will be near 1,000 by early 2003.

33 Statute of the International Criminal Tribunal for the former Yugoslavia, adopted by UN Security Council Resolution 827 on 25 May 1993, Art. 5.

34 The Charter of the International Military Tribunal, annexed to the London Agreement for the Prosecution and Punishment of the Major War Criminals of the European Axis, of 8 August 1945, Art. 6(c).

37 ICTY investigators have also observed the exhumations of the remains of hundreds of Kosovar Albanians who were killed by Yugoslav forces during the war in Kosovo and later transferred to Serbia and buried in clandestine graves.

45 Weinstein, Harvey M., “Where there is no body: Trauma and bereavement in communities coping with the aftermath of mass violence”, paper presented at the ICRC Workshop on Support for Families of People Unaccounted For, Geneva, Switzerland, 10–11 June 2002.

47 See Eppel, Shari, “Healing the dead to transform the living: The preventive implications”, paper presented at the International Seminar on Torture and Organized Violence in the 21st Century, 24–26 January 2001, Copenhagen, Denmark.

49 Psychologists dealing with survivors of trauma have long postulated that personal efficacy is a major determinant in recovery. In recovering from trauma, Judith Herman argues that “[n]o intervention that takes power away from the survivor can possibly foster her recovery, no matter how much it appears to be in her immediate best interest”. See Herman, Judith, Trauma and Recovery: The Aftermath of Violence from Domestic Abuse to Political Terror, Basic Books, New York, 1992, p. 134. Another way of examining this phenomenon is through the “control over one's destiny” hypothesis, developed by Leonard Syme, who holds that control over one's destiny refers to the ability “to influence the events that impinge upon our lives”. According to Syme's research, a great sense of control in one's life often leads to better health outcomes. See S. Leonard Syme, “Social and economic disparities in health: Thoughts about intervention”, The Millbank Quarterly, Vol. 76, 1998, pp. 493–505.

52 Ibid. The UN has also produced two documents – Manual for the Prevention of Extra-Legal, Arbitrary and Summary Executions and Guidelines for the Conduct of United Nations Inquiries into Allegations of Massacres – that set out the standards and procedures for investigating war crimes and violations of human rights.

International Review of the Red Cross
×
Powered by UNSILO

The missing in the aftermath of war: When do the needs of victims' families and international war crimes tribunals clash?

International Review of the Red Cross
×