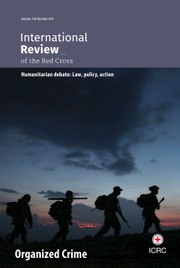 The “failed State” and international law 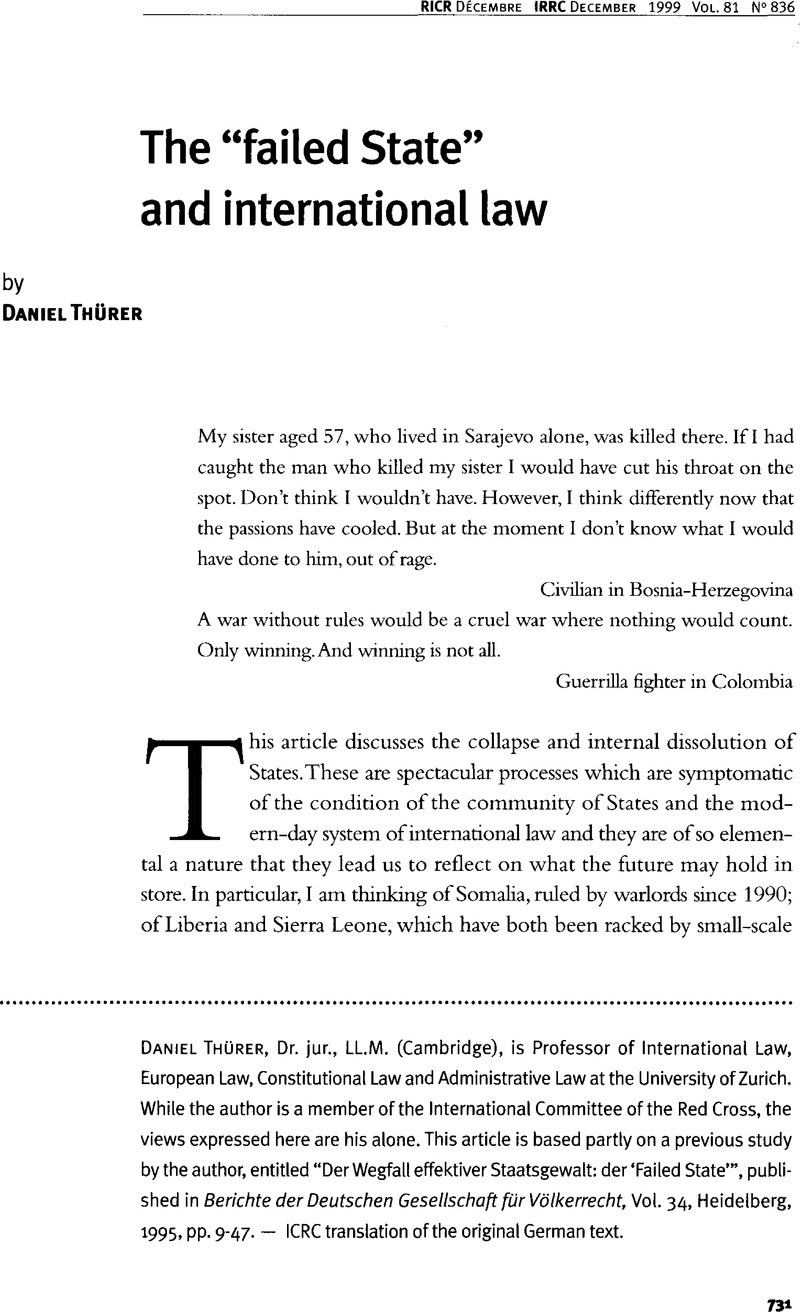 2 In this respect, we can distinguish between two different situations: on the one hand, cases such as that of the Democratic Republic of Congo where a total or near total collapse of government authority does not result in massive violence; on the other, cases such as Somalia and Liberia where the vacuum left by the disintegration of the State is filled by a chaos of small-scale group-based wars.

6 Cf. Arnold Gehlen's incisive reflections on the socio-psychological consequences of the collapse of the State or the social order: “The immediate effect is that the persons concerned become profoundly insecure. The moral and spiritual centres are disoriented because, there too, the certainty of the self-evident has foundered. Thus, penetrating to the very core of their being, insecurity forces people to improvise, compelling them to make decisions à contre cœur or to plunge blindfold into the realms of uncertainty, perhaps seeking at any price fundamentals to cling to and give them a sense of purpose. In practice, moreover, insecurity is manifested in the form of fear, defiance or volatility. The effect is to place a heavy burden of control and decision-making on those layers of the personality where life should be lived problem-free amidst the self-evident and the given if people are to be capable of dealing with more demanding situations. In other words, the displacement people suffer due to the shattering of their institutions is expressed as primitivization.” Quoted in Keupp, Heiner, Lust an der Erkenntnis: Der Mensch als soziales Wesen, Munich/Zurich, 1995, p. 105 ff.Google Scholar – ICRC translation.

17 Judgment in the Case concerning Military and Paramiltary Activities in and against Nicaragua, I.C.J. Reports 1986, pp. 14, 122 ff.

“1. The conduct of an insurrectional movement which becomes the new government of a State shall be considered an act ofthat State under international law.

2. The conduct of a movement, insurrectional or other, which succeeds in establishing a new State in part of the territory of a pre-existing State or in a territory under its administration shall be considered an act of the new State under international law.

3. This article is without prejudice to the attribution to a State of any conduct, however related to that of the movement concerned, which is to be considered an act of that State by virtue of Articles 5 to 10.”, Ibid. — See also Brownlie, Ian, System of the Law of Nations: State Responsibility, Part 1, Oxford, 1983, pp. 177 ff.Google Scholar, and Yearbook of the International Law Commission, 1975/II, pp. 93 ff., 99 ff., 104.

27 Article 15a reads: “Conduct which is not attributable to a State under Articles 5, 7, 8, 8a, 9 or 15 shall nevertheless be considered an act ofthat State under international law if and to the extent that the State acknowledges and adopts the conduct in question as its own.” Op. cit. (note 25).

28 After 24 Pakistani soldiers of the UN force in Mogadishu were lured into an ambush and killed, the Security Council confirmed “that the Secretary-General is authorized under resolution 814 (1993) to take all necessary measures against all those responsible for the armed attacks…, including against those responsible for publicly inciting such attacks, to establish the effective authority of UNOSOM II throughout Somalia, including to secure the investigation of their actions and their arrest and detention for prosecution, trial and punishment.” Resolution 837 (1993) of 6 June 1993, para. 5.

33 In accordance with Article 4 of the Statute of the Rwanda Tribunal (op. cit., note 30) — and this is its special innovation — the Tribunal is authorized to prosecute serious offences against Article 3 common to the Geneva Conventions and against Additional Protocol II. In contrast to the Tribunal for the former Yugoslavia, there is in this case a clear extension of the responsibility of the individual under international criminal law into the purely internal domain. For this and interesting parallel developments with regard to the law on chemical and biological-bacteriological weapons or mines, see especially Meron, Theodor, “International criminalization of internal atrocities”, AJIL, Vol. 89, 1995, pp. 554 ff.CrossRefGoogle Scholar

34 Op. cit. (note 19), para. 89 in connection with para. 137. The Tribunal held, inter alia, that civil wars have become more frequent and more cruel and that third party States are also directly or indirectly involved. In addition, greater attention had to be paid to the protection of human rights since the adoption of the Universal Declaration of Human Rights of 1948.

36 “…situations of internal disturbances and tensions, such as riots, isolated and sporadic acts of violence or other acts of a similar nature.” Article 8.2(d) of the ICC Statute.

37 Article 8.2(e) of the ICC Statute. Exception is made for “situations of internal disturbances and tensions, such as riots, isolated and sporadic acts of violence or other acts of a similar nature”. Article 8.2(f), first sentence. Application is described as follows: “It applies to armed conflicts that take place in the territory of the State when there is protracted armed conflict between governmental authorities and organized armed groups or between such groups.” Article 8.2(f), second sentence.

41 As at 1 November 1999, the Statute had been ratified by Senegal, Trinidad and Tobago, San Marino and Italy.

50 Schreuer, Christoph, “The waning of the sovereign State: Towards a new paradigm for international law?”, European Journal of International Law, 1993, pp. 447 ff.CrossRefGoogle Scholar

The “failed State” and international law
×

The “failed State” and international law
×

The “failed State” and international law
×
×