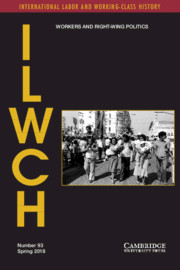 Dictatorships and the Worlds of Work in the Southern Cone

Workers and the Radical Right