FM-to-AM conversion for angular filtering based on transmitted volume Bragg gratings (TBGs) is discussed. Simulation results show that a narrower spectral selectivity of TBGs led to stronger FM-to-AM conversion. Good angular selectivity and a wide bandwidth for the TBGs can be obtained by controlling the grating period and thickness. FM-to-AM conversion can be effectively suppressed and the distortion criterion for the filtered beam reduces to less than 5%. FM-to-AM conversion of TBGs is demonstrated in the ‘Shenguang’ facility, and the results are in good agreement with the simulation.

Transmitted volume Bragg gratings (TBGs) recorded in photothermorefractive (PTR) glass have been widely developed in near-field angular filtering technology due to the high diffraction efficiency, excellent angular selectivity and high damage threshold[Reference Glebov1]. The beam quality of laser beams in both near and far fields can be improved[Reference Zhang, Yuan, Wu, Feng, Zou and Zhang2, Reference Gao, Zhang, Sun and Yuan3]. For a high-power laser system, such as National Ignition Fusion (NIF) and Laser MegaJoule (LMJ), since the highly coherent laser pulse with high spectral power density may induce transverse stimulated Brillouin scattering (TSBS)[Reference Murray, Smith, Ehrlich, Kyrazis, Thompson, Weiland and Wilcox4], sinusoidal phase modulation, known as frequency modulation (FM), is often used to broaden the bandwidth of laser pulses, suppress the TSBS and improve uniformity of the focal spot[Reference Zhang, Zhou, Jiang, Li, Feng and Lin5]. In such laser systems, any inhomogeneous change of the spectrum, probably resulting from dispersion, gain narrowing, Fabry–Perot etalon effects in optical elements, and so on, will cause amplitude modulation (AM) in the pulse[Reference Hocquet, Penninckx, Bordenave, Gouedard and Jaouen6]. Without control, this amplitude-modulated pulse may damage the optical elements[Reference Lindl, Amedt, Berger, Glendinning, Glenzer, Hann, Landen and Suter7]. Currently, FM-to-AM conversion resulting from the amplifier media, spatial filters, fiber components and triple-frequency operation, etc.[Reference Hocquet, Penninckx, Bordenave, Gouedard and Jaouen6, Reference Yang, Feng, Han, Zheng, Li and Tan8], has been studied at the NIF and LMJ. As the key element in angular filtering, the TBGs not only have excellent angular selectivity but also spectral selectivity. Some AM will be introduced in the diffracted pulse, which may be a risk to system integrity. Therefore, obtaining a wide spectral selectivity of TBGs with good angular selectivity may be a key problem in suppressing FM-to-AM conversion, which is useful for the application of TBGs in such high-power laser systems. In previous work on TBGs, the laser beams used were restricted to CW lasers. Also, spectral selectivity and FM-to-AM conversion caused by angular filtering in high-power laser systems have not been discussed.

Figure 2. Dependence of the distortion criterion on the bandwidth.

Figure 3. Dependence of the Bragg selectivity on the grating period and thickness: (a)

The optical field for a laser pulse with sinusoidal phase modulation can be written as[Reference Hocquet, Penninckx, Bordenave, Gouedard and Jaouen6]

$m$ is the modulation coefficient and

$f_{m}$ is the modulation frequency. The corresponding frequency spectrum of the laser pulse can be obtained from the Fourier transform of Equation (1):

$n$ th-order Bessel function[Reference Boyd9]. In theory, the spectrum bandwidth is infinite. However, the 98% energy of the frequency spectrum is centralized in the range of

$2(m+1)f_{m}$ due to Carson’s rule[Reference Carson10]. According to the coupled-wave theory[Reference Kogelnik11], the Bragg selectivity of the lossless TBGs, including angular selectivity (AS) and spectral selectivity (SS), can be described as

$\unicode[STIX]{x0394}n$ is the refractive index modulation,

$n_{\text{0}}$ is the average refractive index of the grating material,

$d$ is the grating thickness,

$\unicode[STIX]{x1D6EC}$ is the grating period,

$\unicode[STIX]{x1D703}_{s}$ are the angles of the incident and diffracted beams, respectively, and

$\unicode[STIX]{x1D706}$ is the wavelength of the incident beam.

$\unicode[STIX]{x0394}\unicode[STIX]{x1D706}$ are the deviations from the Bragg angle and Bragg wavelength, respectively. Thus, the diffracted frequency spectrum can be given as

The optical field and the intensity distribution of the laser pulse can be obtained from the inverse Fourier transform of Equation (7):

Figure 6. Dependence of the distortion criterion on the number of TBGs.

$\unicode[STIX]{x1D6FC}$ , used to evaluate the strength of the FM-to-AM conversion[Reference Wedding12], is defined as

$I_{\min }$ are the maximum and minimum intensity for more than one modulated period, respectively.

$D$ . As the new-type angular filter, TBGs are expected to match up with the pinhole spatial filter to further improve the beam quality. However, TBGs are expected to be used in the preamplifier system, limited by the current preparation technology. The preamplifier system has two stages with different beam sizes. In the simulation, four sinusoidally phase-modulated beams with a central wavelength of 1053 nm are filtered by four different TBGs, respectively. The sizes of the four beams are set to

$40~\text{mm}\times 40~\text{mm}$ , respectively. The structural parameters of the TBGs are shown in Table 1. The cutoff frequency is defined as the half-width at the first zero point (HWFZ) of the AS curve and set to about ten times the diffraction limit.

The bandwidth is defined as the half-width at the first zero point of the SS curve. The bandwidths of the four TBGs are 4.50 nm, 1.35 nm, 0.87 nm and 0.60 nm, respectively. The greater the spectral filtering of the TBGs, the stronger the FM-to-AM conversion. The diffraction efficiencies (DE) of the four TBGs are all 100%. The red and blue lines in Figures 1(a), 1(c), 1(e), and 1(g) represent the SS of TBGs and spectral power density of the incident laser pulse with a pulse duration of 3 ns, a modulation coefficient

$m$ of 6 and a modulation frequency

$f_{m}$ of 3.3 GHz. On the basis of the calculated results, the distortion criterion

$\unicode[STIX]{x1D6FC}$ accumulated by all the optical components should be controlled to less than 5%[Reference Hocquet, Lacroix and Penninckx13] to ensure safe operation of the laser facility. In general, the requirement of the distortion criterion

$\unicode[STIX]{x1D6FC}$ accumulated by all the optical components without the TBGs.

According to the coupled-wave theory, effective optimization of the TBGs’ structural parameters may make it possible to increase the SS while leaving the AS unchanged. It can ensure effective angular filtering and lower FM-to-AM conversion. The cutoff frequency and bandwidth of TBGs can be written as

The cutoff frequency and bandwidth are almost proportional to

$\unicode[STIX]{x1D6EC}^{\text{2}}$ , respectively, which means the SS has a faster growth rate than the AS when the grating period increases, as shown in Figure 3(a). On the other hand, the AS and SS are both inversely proportional to

$d$ , which means they almost have the same rate of decrease when the thickness increases, as shown in Figure 3(b). Therefore, it is possible to obtain a larger bandwidth and a good cutoff frequency by enlarging the grating period and thickness simultaneously. The optimized structural parameters of TBG-3 and TBG-4 are shown in Table 2. 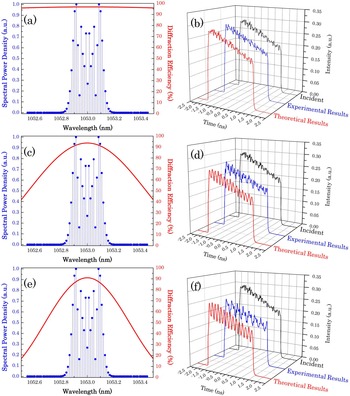 Pairs of the two orthogonal TBGs are needed to realize a two-dimensional angular filter in the laser facility. The combination of more TBGs with the same spectral selectivity will cause a further inhomogeneous change of the laser pulse. Amplitude modulation in the pulse will be enhanced. The distortion criterion increases linearly with an increase in the number of TBGs, as shown in Figure 6.

In actual high-power laser facilities, TBGs are often inserted in the optical path of the latter amplification. The former inhomogeneous change of spectrum, probably resulting from dispersion, gain narrowing or gain saturation effects, will cause some FM-to-AM conversion. The FM-to-AM conversion resulting from the TBGs is cumulative. However, the former inhomogeneous change of spectrum does not increase the bandwidth of the laser beam with sinusoidal phase modulation. Therefore, the effective optimization of the TBGs’ structural parameters still applies.

3 Demonstration of FM-to-AM conversion for TBGs

A schematic diagram demonstrating FM-to-AM conversion with TBGs is shown in Figure 6. The laser beam used in the experiment was sinusoidally phase-modulated in the ‘Shenguang’ facility with a wavelength of 1053 nm, a pulse duration of 3 ns, a modulation index

$m$ of 12 and a modulation frequency

$4f$ system and diffracted through the TBGs recorded in PTR glass. A photoelectric detector and an oscilloscope were used to collect the temporal profile of the original pulse and the diffracted pulse. The structural parameters of the TBGs are shown in Table 3.

In general, the distortion criterion

$\unicode[STIX]{x1D6FC}$ is used to evaluate the FM-to-AM conversion for the flat-topped pulse. However, the temporal profile of the pulse in the real laser system was inclined due to the gain recovery effect. In this case, the quantity

$\unicode[STIX]{x0394}h$ can be used to describe the fluctuation of the pulse, which equals the distance between the envelopes of the inclined pulse, as shown in Figure 7. Also the distortion criterion

$\unicode[STIX]{x1D6FC}$ could be revised as

$y_{\text{0}}$ equals the average intensity of the pulse.

$\unicode[STIX]{x1D6FC}$ before and after TBGs is shown in Table 4. The original

$\unicode[STIX]{x0394}\unicode[STIX]{x1D6FC}$ of TBG-II and TBG-III was about 19.5 times and 37.1 times larger than that after TBG-I, respectively. The results are in good agreement with the theoretical ones.

$\unicode[STIX]{x0394}\unicode[STIX]{x1D6FC}$ after the TBGs with spectral selectivities of 1.0 nm and 0.75 nm were about 19.5 times and 37.1 times larger, respectively, than that after the TBG with a spectral selectivity of 8.7 nm. Experimental results are in good agreement with the theoretical ones. The above work will provide some valuable guidance for angular filters based on TBGs for application in high-power laser systems.

Table 3. Structural parameters of the TBGs in the experiment.

Table 4. Results of the distortion criterion