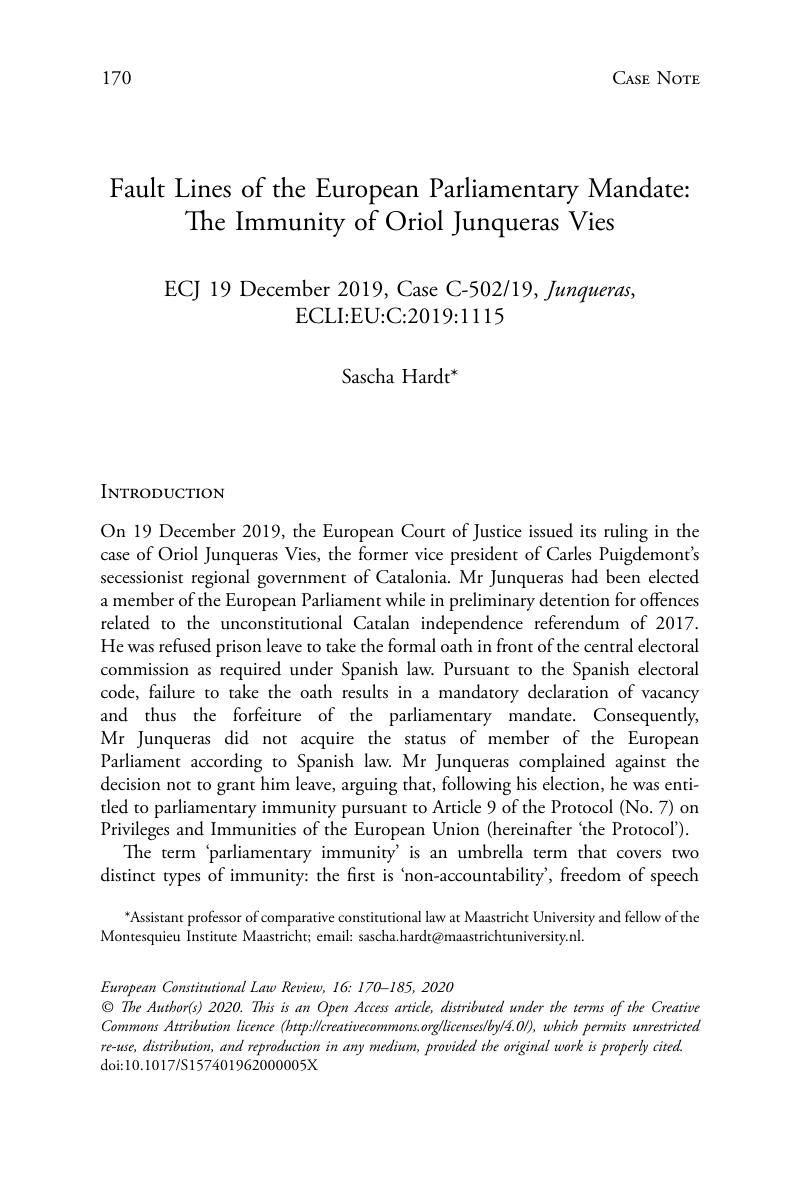 © The Author(s) 2020
This is an Open Access article, distributed under the terms of the Creative Commons Attribution licence (http://creativecommons.org/licenses/by/4.0/), which permits unrestricted re-use, distribution, and reproduction in any medium, provided the original work is properly cited.

1 With the proviso that there are no incompatibilities as referred to in Art. 7(1) and (2) of the 1976 Act concerning the election of the Members of the European Parliament by direct universal suffrage, as amended by Council Decision 2002/772/EC.

6 Currently, 15 member states impose electoral thresholds, varying between 1.8% and 5% of the votes cast. Interestingly, in Germany, where a threshold of 5% applies in national parliamentary elections, the Federal Constitutional Court has ruled both a threshold of 5% and one of 3% unconstitutional in two consecutive judgments (German Federal Constitutional Court, Judgment of 9 November 2011, 2 BvC 4/10 and Judgment of 26 February 2014, 2 BvE 2/13). In both cases, the Constitutional Court’s main argument for the different assessment of the threshold in national and European elections was that in the European Parliament, as opposed to the Bundestag, there is no need for a stable majority to sustain a government, which would justify the encroachment on the principle of equality of the vote constituted by an electoral threshold.

12 With reference to earlier case law, the Court reiterates this purpose as being ‘to completely and expediently protect the institutions of the union against impediments to their proper functioning and independence or against risks of violation thereof […]’. In the case of the European Parliament, this means amongst others that ‘in line with the principle of representative democracy referred to in […] Article 14 TEU, its composition must be a faithful and complete representation of the free choice of citizens, made in direct general elections […]’ (author’s translation); see Junqueras, supra n. 2, paras. 82-83.

13 It has been noted that equality of the vote is not explicitly affirmed in primary or secondary EU law, since the system of digressive proportionality in the allocation of seats in the European Parliament to member states necessarily contains an element of inequality, cf B. Michel, ‘Thresholds for the European Parliament Elections in Germany Declared Unconstitutional Twice: Bundesverfassungsgericht Judgment of 9 November 2011, 2 BvC 4/10, 5% Threshold Judgment of 26 February 2014, 2 BvE 2/13, 2 BvR 2220/13, 3% Threshold’, 12 EuConst (2016) p. 133. Nevertheless, it is arguably part of a wider consensus on the content of the principle of democracy.

16 When the Court set aside the ruling of the General Court confirming the denial of interim measures to Mr Puigdemont and Mr Comín in Order C-646/19, issued one day after the Junqueras judgment, it did so on the ground that ‘contrary to the President of the General Court’s conclusion, the fact that the proclamation [of election results] states that the candidates declared elected are required, in accordance with national law, to swear or affirm allegiance to the Constitution does not exclude, prima facie, that that proclamation may be regarded as the “results declared officially” within the meaning of Article 12 of the Electoral Act’. However, it also cautiously pointed out that the question whether or not the oath of allegiance must be deemed part of the electoral procedure ‘is a question of law to which the answer is not immediately obvious and therefore calls for a detailed examination […]’.

18 In his Report on the request for upholding the immunity and privileges of Mr Francesco Musotto (2002/2201(IMM)), 20 June 2003, A5-0248/2003, para. 17 rapporteur François Zimeray ‘[called] on the Convention and the next intergovernmental conference to correct this anomaly [of the protocol not affording members immunity between election night and the constituent meeting] by amending the text of Article 3 of the 1976 Act. Such a revision would allow optimum protection of Members, guaranteeing them real freedom of expression and filling the legal vacuum which exists […]’.

21 Translation as rendered on the official website of the Spanish Parliament, ⟨www.congreso.es/portal/page/portal/Congreso/Congreso/Hist_Normas/Norm/const_espa_texto_ingles_0.pdf⟩, visited 3 March 2020.

22 Rule 7 of the Rules of Procedure of the European Parliament.

26 Cf Art. 40 of the Statute of the Council of Europe, Arts. 13-15 of the General Agreement on Privileges and Immunities of the Council of Europe, as well as Arts. 3 and 5 of the Protocol thereto. For the historical link, see also T. Harms, Die Rechtsstellung des Abgeordneten in der Beratenden Versammlung des Europarates und im Europäischen Parlament (Hansischer Gildenverlag 1968).

31 In particular those with an affiliation to the cause of Catalan independence, see for instance R. Romeva and A. Bosch, ‘Oriol Junqueras is Europe and it has spoken with a loud voice: Spain must respect democracy’, Euronews op-ed, 9 January 2020, ⟨www.euronews.com/2020/01/09/oriol-junqueras-is-europe-and-it-has-spoken-with-a-loud-voice-spain-respect-democracy-view⟩, visited 3 March 2020.