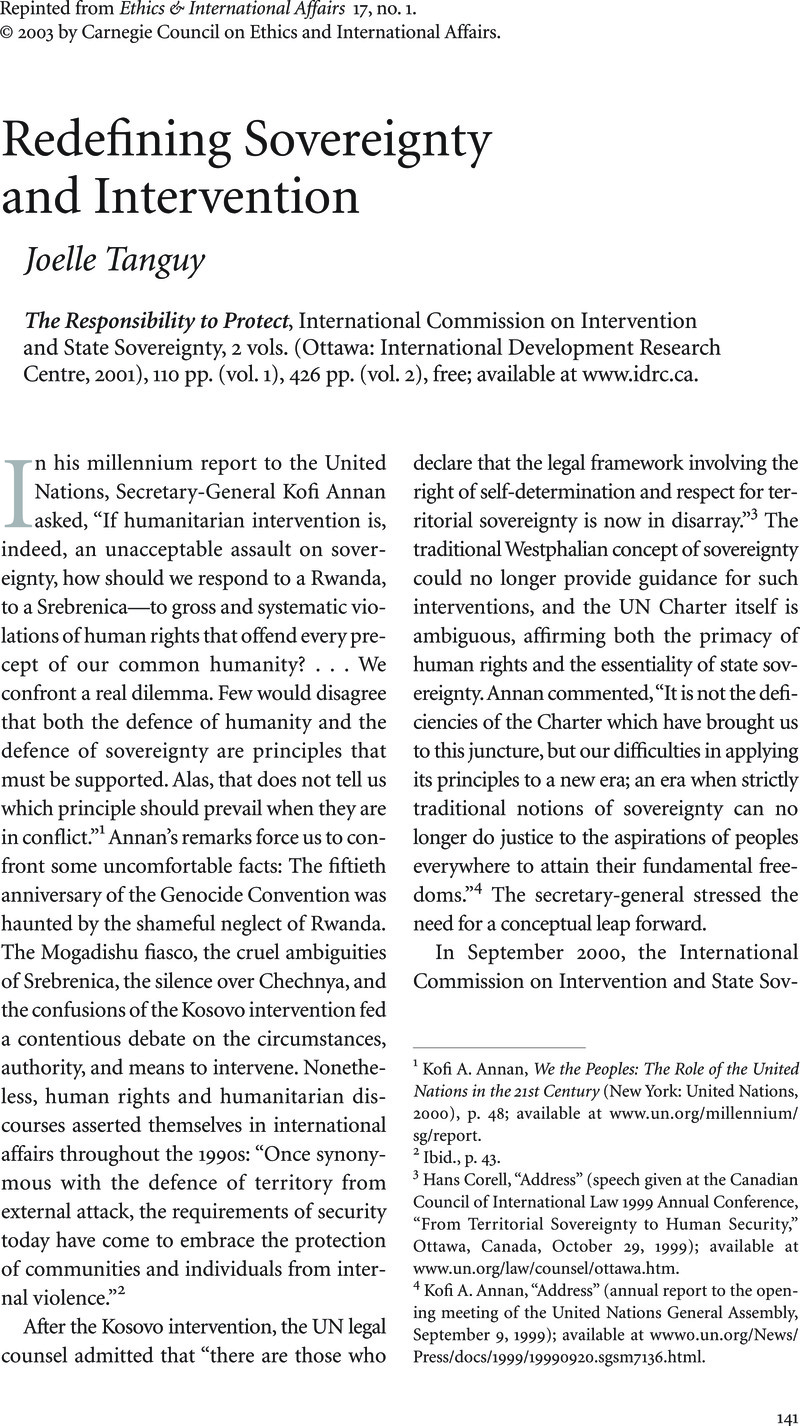 7 Reference to Resolution 43/131 of December 8, 1988, regulating delivery of humanitarian assistance to victims of natural disasters and similar emergency situations and insisting on a principle of free access to the victims; and Resolution 45/100 of December 14, 1990, furthering the previous resolution and introducing the concept of emergency humanitarian corridors.

8 For a brilliant account of these issues, see Shawcross, William, Deliver Us from Evil: Peacekeepers, Warlords and a World of Endless Conflict (New York: Simon & Schuster, 2000).

12 Camilleri, Joseph and Falk, Jim, End of Sovereignty? The Politics of a Shrinking and Fragmenting World (London: Edward Elgar, 1992), p. 2.

13 International Commission on Intervention and State Sovereignty, synopsis in The Responsibility to Protect (Ottawa: IDRC, 2001), vol. I, p. xi.

15 See Evans, “The Responsibility to Protect and September 11.”

17 This was the case with the interventions of the Economic Community of West African States in Liberia in the early 1990S and in Sierra Leone in 1997.

20 Lake, Anthony and Morris, Roger, “The Human Reality of Realpolitik,” Foreign Policy 4 (Fall 1971), pp. 157–62, analyzed the process whereby American policy-makers with moral sensibilities could wage a war with such immoral consequences as the one in Vietnam. Cited by Samantha Power, “Bystanders to Genocide: Why the United States Let the Rwandan Tragedy Happen,”Atlantic Monthly, September 2001, pp. 84–108; available at http://www.theatlantic.com/issues/2001/09/power.htm.

21 William Ferroggiaro, ed., The US and the Genocide in Rwanda 1994: Evidence of Inaction (National Security Archives, George Washington University, August 20, 2001); available at http://www.gwu.edu/~nsarchiv/NSAEBB/NSAEBB53/index.html.

22 For further discussion of U.S. policy development with regard to Rwanda, see Power, “Bystanders to Genocide”; and Power, Samantha, “A Problem from Hell”: America and the Age of Genocide (New York: Basic Books, 2002).

25 White House, “Frequently Asked Questions about the War on Terrorism at Home and Abroad”; available at http://www.whitehouse.gov/response/faq-what.html.

26 International Commission on Intervention and State Sovereignty, The Responsibility to Protect, vol. I, p. 12.