These authors contributed equally to this article and share first authorship.

In Germany, salmonellosis is a notifiable disease. Salmonella enterica subsp. enterica serotype Kottbus (S. Kottbus) is a rare serotype with three to four notifications per month [1]. S. Kottbus has been repeatedly isolated from poultry and poultry meat and has been found in cattle, pork, pigs and reptiles [Reference Toboldt2]. Bottled water, sprouts and human milk have been identified as vehicles in previous S. Kottbus outbreaks [Reference Ryder3–Reference Winthrop5].

In July 2017, the notifications of S. Kottbus infections increased, particularly in the coastal area of Schleswig-Holstein, Germany. We conducted an outbreak investigation to identify the source of the outbreak and to implement control measures.

Outbreak cases were defined as individuals living in Germany with S. Kottbus infection, symptom onset between 20 June and 31 August 2017 and no travel abroad in the week before symptom onset. If the date of onset was not available, the date of sample receipt at the National Reference Centre for Salmonella and other Bacterial Enterics (NRC) between 26 June and 31 August 2017 was used.

S. Kottbus isolates from cases voluntarily sent to the NRC by diagnostic laboratories were subtyped using PFGE following XbaI macrorestriction according to the PulseNet protocol and/or WGS [Reference Ribot6].

The multi-locus sequence type (MLST) based on seven housekeeping gene loci was extracted from whole-genome data [Reference Maiden7]. The bioinformatics analysis for cluster detection was performed with an ad hoc cgMLST-scheme for S. enterica based on 2143 loci using Ridom SeqSphere+ [Reference Simon8]. Raw reads from one exemplary isolate belonging to the outbreak cluster were uploaded to the European Centre for Disease Prevention and Control (ECDC) server to allow comparison with isolates from other European countries. Sequences, provided from Public Health Institutes of other countries, were included in the gene-by-gene analysis.

We telephone-interviewed adult S. Kottbus cases residing or exposed in the states Schleswig-Holstein, Hamburg and Mecklenburg-Western Pomerania (hereafter ‘Northern Germany’) with symptom onset between 20 June and 16 August 2017. In households with more than one case, only the patient with the earliest symptom onset was included.

We recruited four frequency-matched controls per case (by age group (25–49, 50–64, 65–85 years), sex and district of residence). Controls were identified by a research service institute using random digit dialling of landline numbers. If there was a suitable control person in the household, they were telephone-interviewed.

Using a structured questionnaire, participants were asked about symptoms, food products consumed, and where they were consumed up to 1 week prior to illness/interview and up to 2 weeks for supermarkets.

Only a subset of controls were asked about ham consumption, as it evolved as the suspected vehicle after the interviews of controls had already started and call-backs were not possible. If ham was consumed, pictures were provided to cases to identify specific products.

In the analysis, we excluded patients with subtyping results not consistent with cluster 1 and included patients exploratively interviewed, as the final hypothesis had not been formulated based on these interviews; for these cases, no controls were recruited. To adjust for the matching variables, we grouped cases and controls by age group (25–55, 56–85 years), sex and state of exposure. We conducted univariable and multivariable analysis and estimated adjusted odds ratios (aOR) and their 95% confidence intervals (CI) using conditional logistic regression with STATA version 14.1 (StataCorp, College Station, Texas, USA). In the analysis, uncertain exposure was considered as missing. Exposures with the smallest P-values in the univariable analysis (⩽0.08) and possibly originating from the same food source as the implicated vehicle were included in the multivariable model. To test for the independence of variables, we performed χ 2 tests. Regiograph Analyse (GfK SE, Nuernberg, Germany) was used to create maps.

Interviews of cases not included in the case–control study

On 22 August 2017, we informed other countries about the increase in S. Kottbus cases via the ECDC's Epidemic Intelligence Information System (EPIS) [9]. Countries were asked to report the increases of S. Kottbus notifications or S. Kottbus patients with travel to Germany and to provide a sequence to compare with the sequences of German clusters.

Within the three WGS clusters, the maximum pairwise distance was four loci, while different clusters were 15–33 loci apart (Fig. 1). All three clusters belonged to 7-locus sequence type ST212. Denmark, Ireland, the UK and France provided S. Kottbus sequences for comparison. Two sequences, one from Denmark and one from the UK, were indistinguishable from cluster 1. 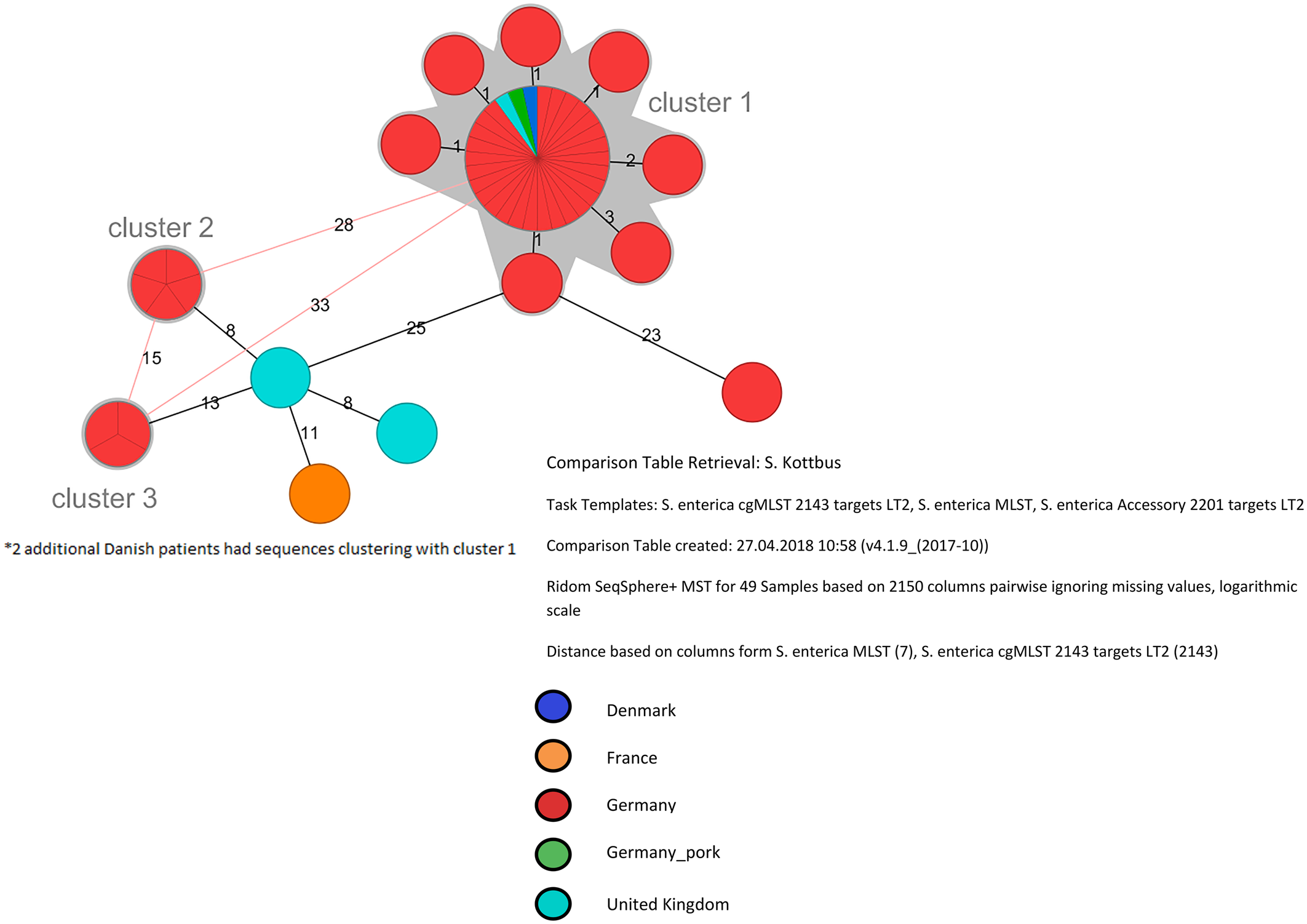 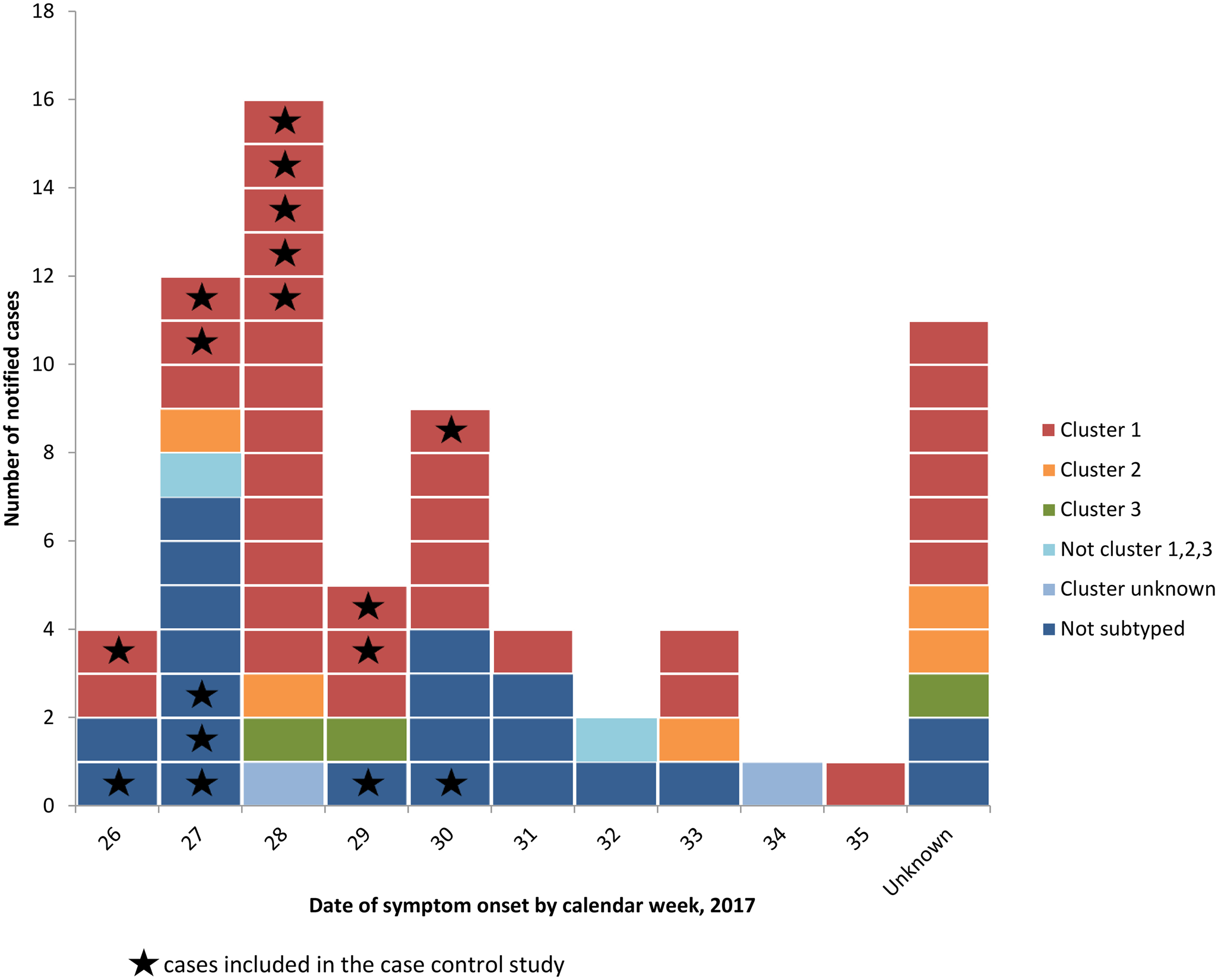 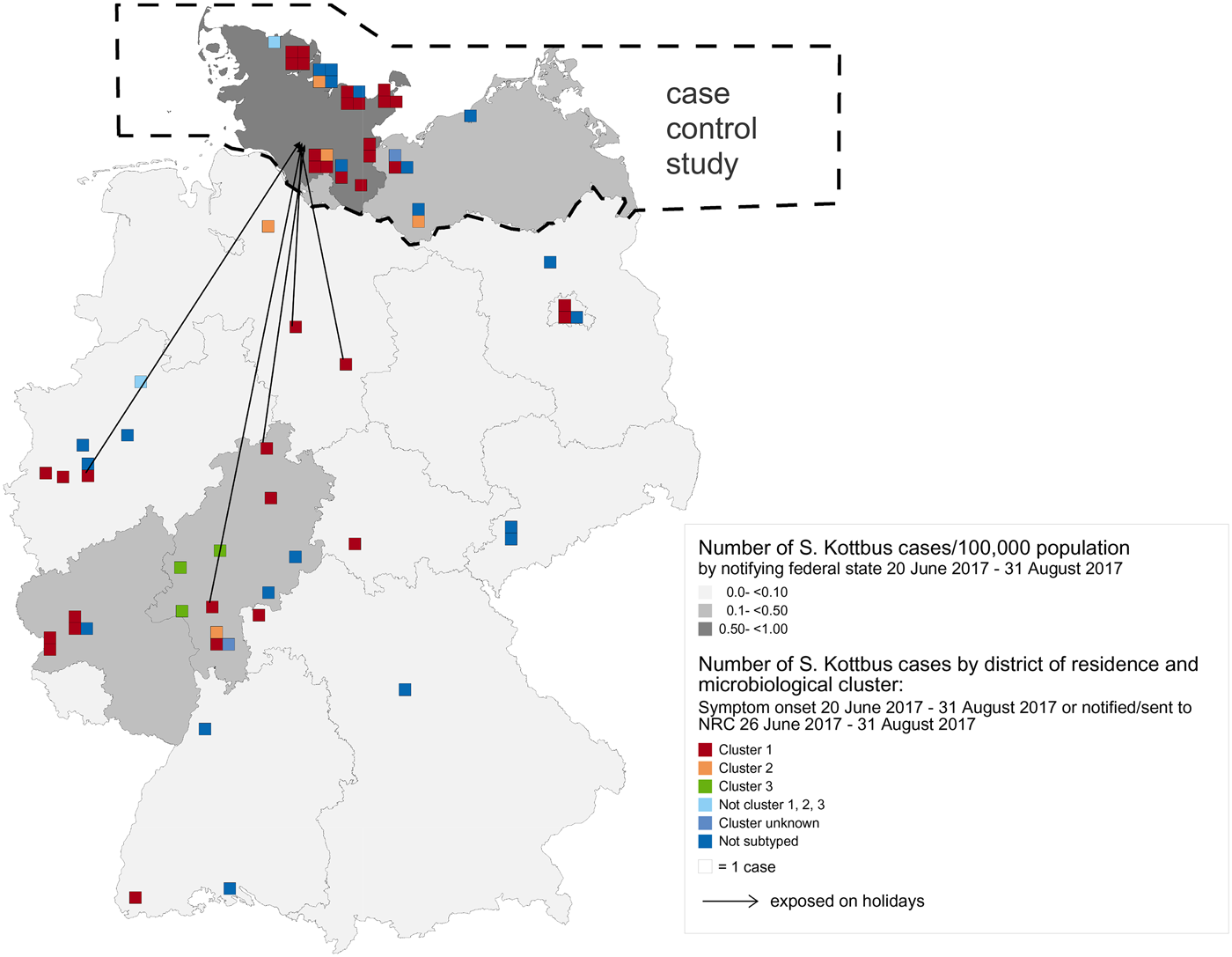 Ninety-six controls and 17 cases (11 confirmed and six probable cluster 1) were included in the case–control study.

Of 14 cases reporting raw smoked ham (hereafter ‘ham’) consumption, 10 (71%) had eaten ham from supermarket chain X. Of those, nine cases had eaten a specific ham product Y and one a slightly different product with a similar package. Four cases (29%) reported the consumption of any type of raw minced meat, including two of the three cases with no or uncertain ham consumption.

Consumption of ham from supermarket chain X and raw minced meat had the highest point estimates (OR 37, 95% CI 3.7–356 and OR 4, 95% CI 0.9–18.3, respectively, Table 2). As the exposures were independent and raw minced meat could explain two additional cases, both were included in the multivariable model. 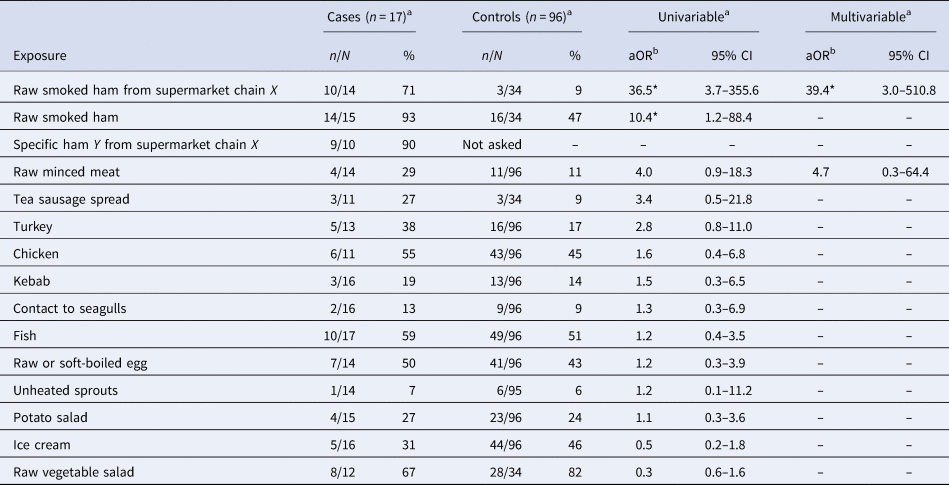 a Uncertain consumption was coded as missing.

b Adjusted for age group, sex and state of exposure.

Interviews of cases not included in the case–control study

All three interviewed cluster 2 cases and one case belonging to either cluster 2 or 3 recalled handling and/or consuming quail eggs (Table 3). Two cases reported eating the eggs raw or soft-boiled. The quail eggs were bought at two different supermarket chains. A common origin could not be excluded. Cases stated consuming quail eggs for health reasons, as a nourishing food or because of chicken egg allergies. No other case reported this exposure.

a Uncertain consumption was coded as missing.

b PFGE: 5var1: compatible with cluster 2 or cluster 3, no WGS available.

A S. Kottbus isolate from pork intended for animal feed from April 2017 was indistinguishable from cluster 1 by WGS. A link to ham production could not be established.

The ham producer presented negative microbiological test results from the company's internal control conducted at the beginning of August 2017. No leftover ham products from affected households were available for analysis. All tested samples of ham and quail eggs collected from supermarkets late in the outbreak investigation were negative for Salmonella spp.

Fourteen countries replied on EPIS. Based on WGS, five patients belonging to cluster 1 were reported. One patient from the UK (symptom onset in May 2017) without travel history had handled and consumed raw pork; details on the type were not provided. Of the four patients from Denmark (symptom onset April–September 2017), three were interviewed and reported buying food in German supermarkets in Denmark. Two patients had travelled to Germany in the week before symptom onset; one recalled consuming ham Y bought in Northern Germany from supermarket chain X.

Thirty-six cases belonged to the largest outbreak cluster (cluster 1). Cluster 1 patients were also identified in Denmark and the UK. In Germany, this strain had not previously been detected in humans.

The matching isolate from pork intended for animal feed shortly before the outbreak further supports ham as the likely vehicle, even if a link between the isolate and ham Y could not be established. S. Kottbus could not be detected in food samples, but they were collected late during the outbreak investigation. By September 2017, the number of S. Kottbus notifications fell to the expected number.

Raw smoked ham and raw minced pork have been linked repeatedly to outbreaks with other Salmonella serotypes [Reference Mertens10–Reference Schroeder15] and S. Kottbus has previously been isolated from pigs and pork in Germany [Reference Toboldt2]. It therefore seems possible that other pork products, especially if consumed raw, may have contributed to this outbreak. Two of the three cases with no or uncertain ham consumption in our case–control study had eaten raw minced meat, potentially containing pork. Although consumption of raw minced meat could possibly explain additional cases and was more commonly reported by cases than controls in our case–control study, this result was not statistically significant and the exposure ‘only’ explained 29% of cases. As both products originate from the same food source, it remains unclear if raw minced meat additionally contributed to the cluster 1 outbreak.

Quail eggs were the likely source for the smaller second identified cluster (cluster 2). S. Kottbus has previously been detected in quails [Reference Toboldt2]. All interviewed cluster 2 cases reported the consumption of quail eggs. This seems disproportionately high, especially as only 1% of German adults participating in a representative food survey in 2017 reported quail egg consumption within the last week (unpublished results, personal communication B. Rosner, RKI). Quail eggs should be considered as a potential vehicle in Salmonella outbreaks.

Although S. Kottbus is a rare Salmonella serotype, molecular subtyping, especially WGS, was essential in distinguishing between different clusters and in identifying concurrent S. Kottbus outbreaks. As WGS was not conducted routinely in Germany before 2017, we do not know if clusters 2 and 3 might have previously contributed to the background rate of S. Kottbus infections.

Without WGS, misclassification of cases would have weakened the measures of association and impeded the identification of the vehicle of the cluster 1 outbreak and obscured the strong common exposure of quail egg consumption reported by cluster 2 cases.

Our investigation highlights the importance of subtyping. WGS especially was essential in identifying the concurrent outbreaks of a rare Salmonella serotype and supported the epidemiological investigation by minimising case-misclassification. WGS was therefore valuable in identifying raw smoked ham and quail eggs as likely vehicles in concurrent S. Kottbus outbreaks.

We are especially grateful to Dr Rita Prager for performing the PFGE. Without her work, the outbreak investigation would not have been possible. We would also like to thank participating patients and controls, local and federal public health offices that provided contact details from cases and conducted interviews themselves. We thank the Food Safety Authorities for their investigation and support. We thank the physicians for sending samples for diagnostic testing, laboratories that provided isolates for further subtyping and all partners in countries that replied to our urgent inquiry on EPIS. For providing sequence reads for genome comparison, we wish to thank Eva Litrup (Statens Serum Institut, Copenhagen), Jacquelyn McCormick (Public Health England, London), Martin Cormican (National University of Ireland, Galway) and Simon Le Hello and Laetitia Fabre (Institut Pasteur, Paris). The authors are very grateful for the statistical support from Irina Czogiel and the team from the Postgraduate Training in Applied Epidemiology at the Robert Koch Institute. We would also like to thank Bettina Rosner from Robert Koch Institute for sharing preliminary, unpublished results of a food consumption survey in Germany.

This study was supported by the European Union's Horizon 2020 research and innovation program through COMPARE (S.G.L., grant agreement number 643476).