The contribution of voluntary support by medical staff is increasingly important during nuclear, biological, and chemical (NBC) disasters. A report highlighted the important role of Médecins Sans Frontières (MSF) during the Ebola outbreak. 1 We acknowledge the important contributions from voluntary medical providers, which we experienced after the Fukushima Daiichi Nuclear Power Plant accident on March 12, 2011.

Here, we would like to share our experience. The Japanese government established a mandatory evacuation zone for a 20-km radius around the plant. This made our hospital, located 23 km from the plant, the closest hospital to the plant to continue operating. However, 6 of 13 doctors and 80 of 164 nurses in our hospital had evacuated after the nuclear accident on March 12, 2011. As a result of the decreased staffing, we were not in a position to provide adequate care to hospitalized patients. 2

Moreover, support from the government was withdrawn as the nuclear situation worsened. Although the government sent 178 medical workers on March 12, the entire team evacuated in 3 days. Similarly, on March 15 the Japan Red Cross Society made the decision not to send any relief teams to a 30-km radius around the nuclear plant.

In contrast to this lack of official support, we received voluntary support. From March 20, 2011, to November 30, 2012, a total of 275 medical staff came on their own volition to provide clinical support to our hospital (Figure 1). They also contributed to post-disaster research by increasing the number of patients participating. Consequently, we were able to investigate the internal radiation dose of 98% of elementary and junior high school students. 3 In the end, the voluntary assistance of medical professionals was more influential than support from governmental or nongovernmental institutions, from both clinical and research perspectives.

NBC disasters, natural or manmade, can happen anywhere in the world. We should be aware of the limitations to governmental support. Voluntary support may have the biggest impact on recovery and post-disaster research, as seen in the Fukushima disaster and the Ebola outbreak. 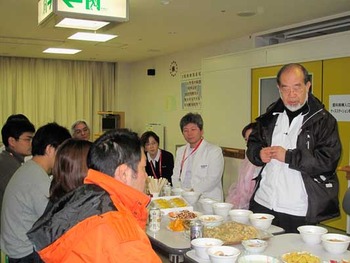