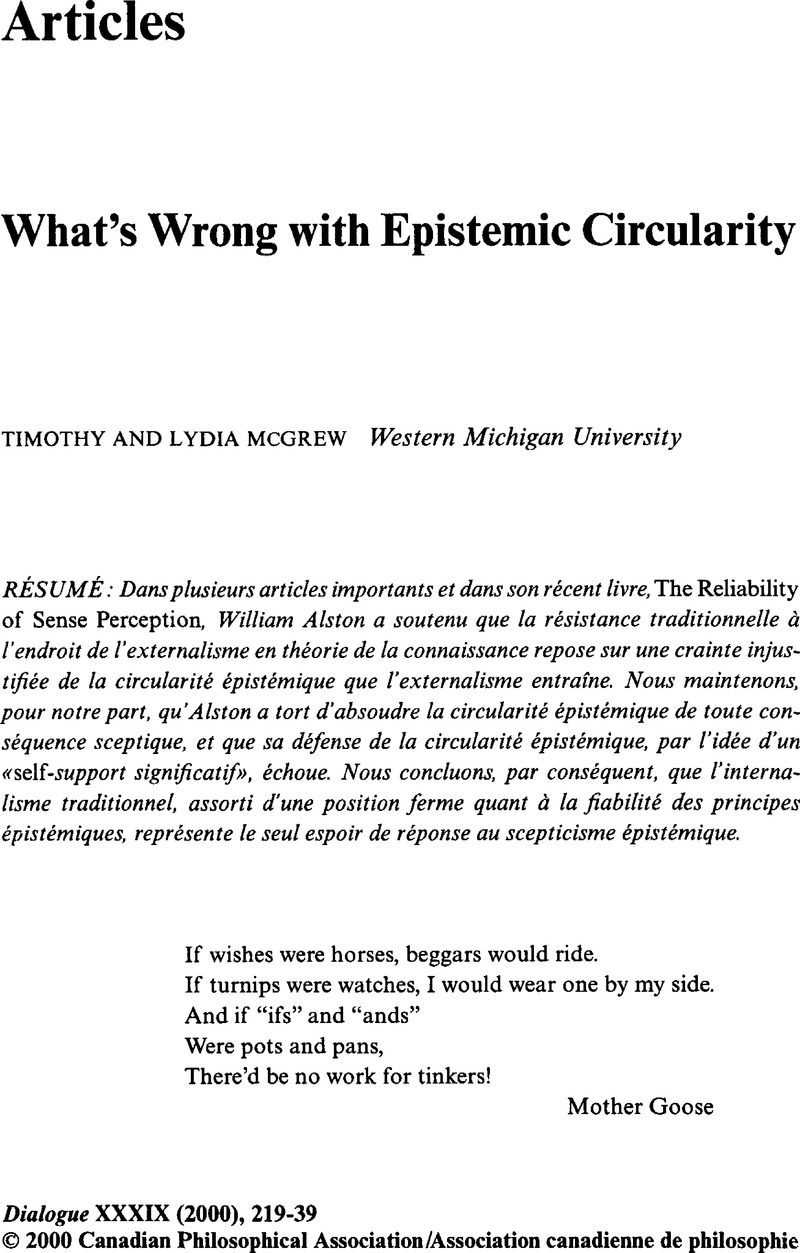 3 This is, of course, a very crude approximation to an epistemic principle for induction and is open to numerous objections as it stands. But since it is serving a purely illustrative purpose there is no need to present a more elaborate version.

4 The example of circularity given here is, of course, very simple. More complex cases, where P is only one of many reasons in its own ancestry, require careful handling, although they also fall to a similar foundationalist criticism. See McGrew, Timothy, “How Foundationalists Do Crossword Puzzles,” Philosophical Studies, 96: 333–50.

6 Of course we might pick up on the resulting regularity by an inductive procedure, as Reichenbach stresses; but under such circumstances, the regularity would not be an epistemic principle but rather an empirical generalization, epistemically useful to us only insofar as it functioned as a premise at the Aristotelian level of the argument. The epistemic principle in question would be the inductive one.

7 Richard Fumerton points out the problem of discriminating among belief sources which arises from reliabilism in Metaepistemology and Skepticism (Lanham, MD: Rowman & Littlefield, 1995), pp. 177–79. Fumerton does draw the conclusion that reliabilist ideas of justification must be incorrect, but he does not do so in the same terms we are using here.

8 For additional discussion of the metaregress and vindicability, see Timothy, and McGrew, Lydia, “Level Connections in Epistemology,” American Philosophical Quarterly, 34: 85–94.

18 Ibid., p. 346. Alston gives a footnote at this point to Section III of his paper “Level Confusions in Epistemology,” which is essay 6 in this collection. The relevant section begins on p. 166.

22 Ibid., p. 138. This is only one of two types of self-support Alston alludes to, but the characteristic flaw infects both.

24 Thanks to David Woodruff and to an anonymous reader for suggesting that this response should be dealt with.

26 See Alston, Epistemic Justification, pp. 321–22; Nozick, Robert, Philosophical Explanations (Cambridge, MA: Harvard University Press, 1981), p. 172; and Goldman, Alvin, Epistemology and Cognition (Cambridge, MA: Harvard University Press, 1986), pp. 38–39et passim. In each case the version of externalism advanced allows that high-level empirical beliefs may be justified (or fulfill a similar role in empirical knowledge to the role justification is supposed to play) even if a subject does not have an argument of the internalist sort for these beliefs, but they cannot be justified in the absence of the externalist connection.

27 Or that it possesses whatever justification Ersatz the theorist prefers, as with Nozick's notion of “tracking.”

28 This has deliberately been phrased in a generic form so as to fit all forms of “reliability,” “tracking,” and non-specified nomological relation theories.

29 This problem may not arise until we have gone back down the Aristotelian tree to the premises for (X). Those premises will be drawn from some source of belief, and this source, according to externalist requirements, must be reliable, must track the truth, etc. But, directly or indirectly, the justification of (X) will depend upon the truth of some claim analogous to (X) itself.