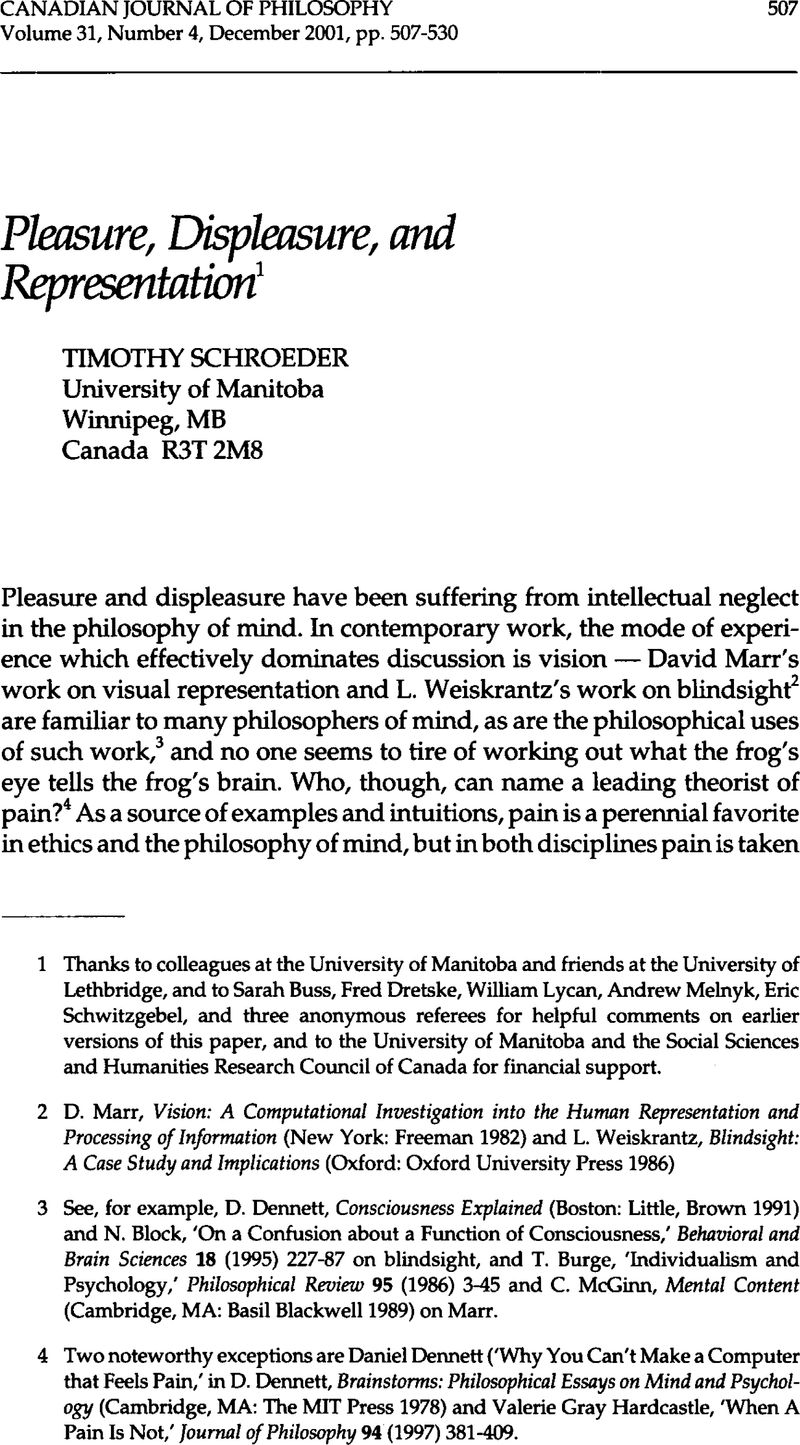 4 Two noteworthy exceptions are Dennett, Daniel ‘Why You Can't Make a Computer that Feels Pain,’ in Dennett, D.Brainstorms: Philosophical Essays on Mind and Psychology (Cambridge, MA: The MIT Press 1978) and Hardcastle, Valerie Gray ‘When A Pain Is Not,’ Journal of Philosophy 94 (1997) 381–409.

5 Strawson, G.Mental Reality (Cambridge, MA: The MIT Press 1994). One important exception is Davis, W. ‘A Causal Theory of Enjoyment,’ Mind 91 (1982) 240–56. Davis's account of pleasure is importantly different from the one which follows, most particularly in that it holds pleasure not to be a sensation (241) and not to be representational in character, but there are still a number of congruences between the two theories.

10 This is a result of their having a basis in a system of receptors, the nociceptors, sensitive to tissue damage. See Kandel, E.Schwartz, J. and Jessell, T.Principles of Neural Science 4th ed. (New York: McGraw-Hill 2000).

11 See Melzack, R.The Puzzle of Pain (New York: Basic Books 1973), 93–6. Melzack writes of frontal lobotomy patients that ‘The predominant effect of lobotomy appears to be on the motivational-affective dimension of the whole pain experience. The aversive quality of the pain and the drive to seek pain relief both appear to be diminished’ (95). Comments such as ‘input, even at intense, noxious levels, seems never to well up into frank pain’ are used to characterize the other two sorts of cases. (For a somewhat different interpretation of similar evidence, see ‘Why You Can't Make a Computer that Feels Pain’ in Dennett's Brainstorms.)

12 At points, Tye seems inclined to identify pleasure and displeasure with the motivational roles other representations have. For a response to this, see below.

13 And, it now appears, meatiness.

14 Akins, Though K. ‘Of Sensory Systems and the “Aboutness” of Mental States,’ Journal of Philosophy 93 (1996) 337–72, disputes that our thermal sense is representational.

15 Kosslyn, S.Image and Brain: The Resolution of the Imagery Debate (Cambridge, MA: The MIT Press 1994)

18 This theory of pleasure and displeasure echoes ideas found in the Philebus (33e ff.), while taking them in directions somewhat different from those Plato would endorse. Thanks to an anonymous referee for bringing this to my attention.

19 Change in level of net intrinsic desire satisfaction. must be measured relative to some baseline level, of course. I have no particular hypothesis about what precisely sets this baseline, but it seems to be an average over the not-too-recent, not-too-distant past.

20 As an anonymous referee has pointed out, this presupposes that pleasure and displeasure are unified phenomena—that the pleasures of intellectual achievement and sexual activity, for example, considered only as pleasures (ignoring the attendant phenomenology of autonomic arousal, mental imagery, etc.) vary only in time course and intensity, and, further, differ from all forms of displeasure only as feelings of warmth differ from feelings of cold, through being experiences on a positive or negative end of a continuum. I find this so phenomenologically plausible that I confess to being at a loss to defend it through argument. If the represented loudness of a horrifying artillery bombardment can be as great as the represented loudness of an enjoyable rock music concert or a thrilling spacecraft launch, which I take it no philosopher of mind would deny, then I see no reason to deny that pleasantness too is a unified type of representation. I suppose that other individuals might have phenomenologies different from mine, as a result of having different structures underlying the perception of desire satisfaction; if this is the case, then the present theory will only serve as a theory of pleasure and displeasure in the cases of individuals such as myself, but I am reluctant to draw such a conclusion without more information.

22 Not coincidentally, this is the conclusion Sousa, R. DeThe Rationality of Emotion (Cambridge: The MIT Press 1987) and Charland, L. ‘Feeling and Representing: Computational Theory and the Modularity of Affect,’ Synthese 105 (1995) 273–301, reach about the emotions. But it should be noted that I am using the heading ‘modularity’ to consider just one aspect of it, namely informational encapsulation. Fodor, J.The Modularity of Mind: An Essay on Faculty Psychology (Cambridge, MA: The MIT Press 1983) discusses eight other features of modules, including the fact that the operation of a module is mandatory, that its intermediate representations are not available for use outside the module, that modules operate rapidly, etc. I do not attempt to show that hedonic processing has all these features, though, and so I leave it open that (as an anonymous referee has suggested) hedonic processing is sometimes better thought of as simply responding to transduced stimuli, rather than being modular (all sensory modules respond to transduced stimuli, but not everything so responding need be a module). Whether hedonic processing is genuinely, full-bloodedly modular is an interesting question, but one I leave for another occasion.

26 A related phenomenon (pointed out to me by William Lycan) is the use of a coin toss to determine what one wants. One narrows the options to two, assigns each to one face of the coin, and tosses the coin. If one is pleased with the way the toss has come up, one can conclude that that is what one most wanted to do all along. If one is displeased (and perhaps wishes to make some excuse to ‘try again’) then one has good reason to believe one prefers the other option. Again, pleasure and displeasure provide evidence for what we want.

29 Thanks to Andrew Melnyk for raising this point.

30 This is the primary role given to desires by Dretske, F.Explaining Behavior: Reasons in a World of Causes (Cambridge, MA: The MIT Press 1988).

31 Thanks to an anonymous referee for this point.

32 Thanks to an anonymous referee for this point.