Locke on Persons and Personal Identity 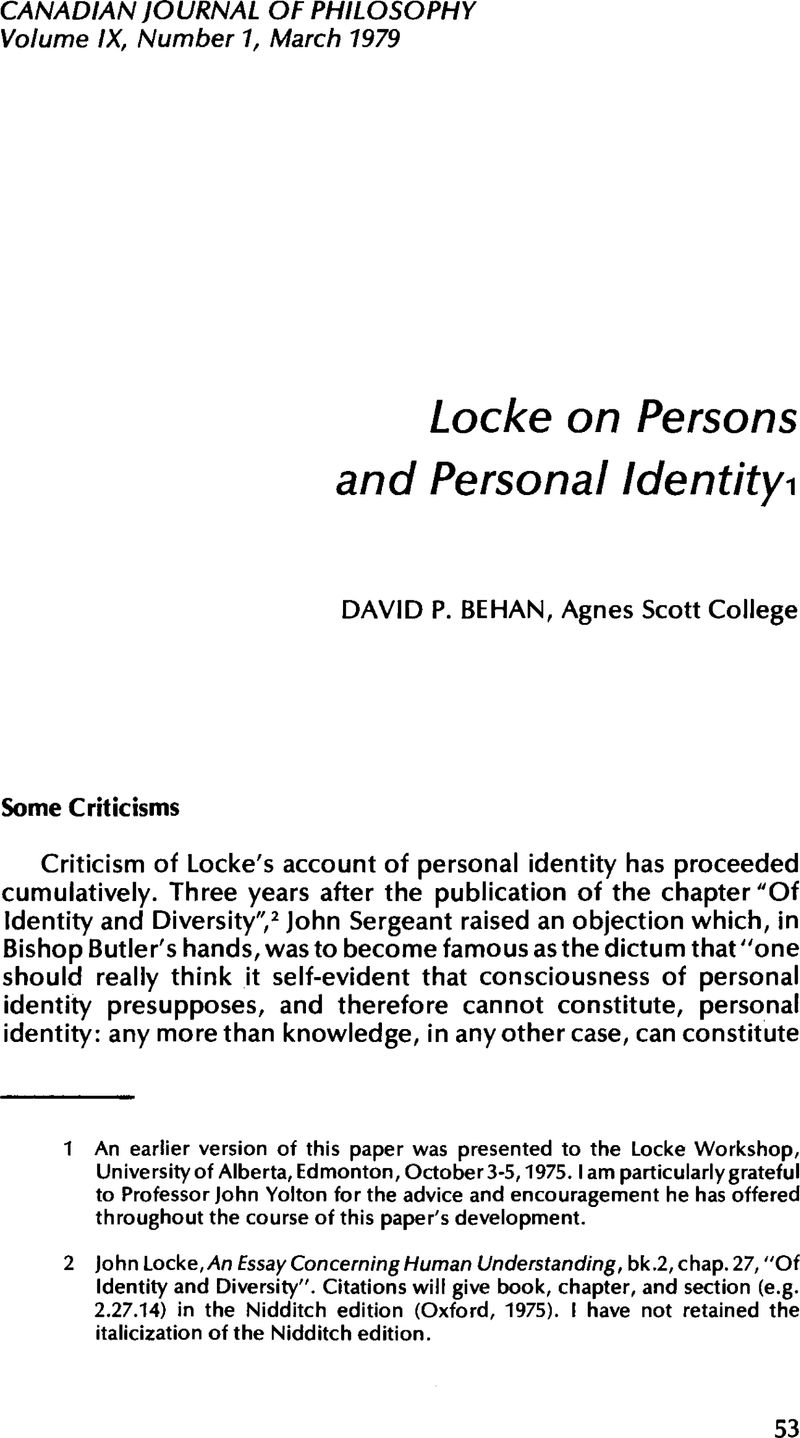 An earlier version of this paper was presented to the Locke Workshop, University of Alberta, Edmonton, October 3-5, 1975. I am particularly grateful to Professor John Yolton for the advice and encouragement he has offered throughout the course of this paper's development.

An earlier version of this paper was presented to the Locke Workshop, University of Alberta, Edmonton, October 3-5, 1975. I am particularly grateful to Professor John Yolton for the advice and encouragement he has offered throughout the course of this paper's development.

An earlier version of this paper was presented to the locke Workshop, University of Alberta, Edmonton, October 3-5, 1975. I am particularly grateful to Professor John Yolton for the advice and encouragement he has offered throughout the course of this paper's development.

2 Locke, John, An Essay Concerning Human Understanding, bk.2, chap. 27, “Of Identity and Diversity”. Citations will give book, chapter, and section (e.g. 2.27.14) in the Nidditch edition (Oxford, 1975). I have not retained the italicization of the Nidditch edition.

Consciousness of any Action or other Accident we have now, or have had, is nothing but our Knowldge [sic] that it belong'd to us; and, since we both agree that we have no Innate Knowledges [sic], it follows, that all both Actual and Habitual Knowledges which we have, are Acquir'd or Accidental to the Subject or Knower. Wherefore the Man, or that Thing which is to be the Knower, must have had Individuality or Personality from other Principles, antecedently to this Knowledge call'd Consciousness; and consequently, he will retain his Identity, or continue the same Man, or (which is equivalent) the same Person, as long as he has those Individuating Principles …. It being then most evident, that a Man must be the same, ere he can know or be Conscious that he is the same; all his [Locke's] Laborious Descants, and Extravagant Consequences, which are built upon this Suppositions [sic], that Consciousness individuates the Person, can need no farther Reflexion.

Butler was five years old when Sergeant published his critique, and credit for ‘Bishop Butler's famous dictum’ ought to rest with Sergeant. The quotation from Butler is from “Of Personal Identity”, appended to Joseph Butler, The Analogy of Religion.

9 Flew, op. cit. (revised version), p. 169, spoke of Locke's “Platonic-Cartesian conviction that people essentially are incorporeal spirits, and that human bodies in fact are controlled by internal shadow beings in ways similar to, but much less intelligible than, that in which ships are directed by their captains or vehicles by their drivers”.

10 Flew, op. cit. (revised version), p.172, remarked that Locke “thought he had successfully found in memory what Hume called the ‘uniting principle, which constitutes a person’ ”.

The scripture being express, that the same persons should be raised and appear before the Judgement-seat of Christ, that every one may receive according to what he had done in his body; it was very well suited to common apprehensions (which refined not about “particles that had been vitally united to the soul”) to speak of the body which each one was to have after the resurrection, as he would be apt to speak of it himself. For it being his body both before and after the resurrection, every one ordinarily speaks of his body as the same, though in a strict and philosophical sense, as your lordship speaks, it be not the very same. Thus it is no impropriety of speech to say, “this body of mine, which was formerly strong and plump, is now weak and wasted;” though, in such a sense as you are speaking here, it be not the same body.

17 I am grateful to Professor Yolton for pointing out to me the relevance to my thesis of Locke's discussion of moral man in bk. 3.

In the law there may be men who are not persons; slaves, for example, are destitute of legal personality in any system which regards them as incapable of either rights or duties.

25 In his French translation of the Essay, P. Coste, wrestling with Locke's use of “consciousness” in praktike, wrote:

Le mot Anglois est consciousness qu'on pourroit exprimer en Latin par celui de conscientia, si sumatur pro actu illo hominis quo sibi est conscius. Et c'est en ce sens que les Latins ont souvent employé ce mot, témoin cet endroit de Ciceron (Epist. ad Famil. Lib. VI Epist. 4.) Conscientia rectae. voluntatis maxima consolatio est rerum incommodarum. En François nous n'avons à mon avis que les mots de sentiment & de conviction qui répondent en quelque sorte à cette idée. Mais en plusieurs endroits de ce Chapitre ils ne peuvent qu'exprimer fort imparfaitement Ia pensée de Mr. Locke qui fait absolument dépendre 1'ldentité personnelle de cet acte de I'Homme quo sibi est conscius. (The English word is consciousness, which can be expressed in Latin by [moral] awareness, if it may be taken for that act of man by which he is conscious to himself[of something right or wrong in himself]. And it is in this sense that the Latins have often used this word, witness, for example, this citation of Cicero (Epist. ad Famil. Book VI Letter 4.) Awareness of a [morally] right disposition is the best possible comfort in trouble. In French we have only, in my opinion, the words sentiment and conviction which in some way measure up to that idea. But in several places in this chapter [2.27], they can only express very imperfectly the thinking of Mr. Locke who makes personal identity to be absolutely dependent upon that act of man by which he is conscious to himself.)

26 A.M.S. Boethius, A Treatise Against Eutyches and Nestorius, chap. 3: “We have found the definition of Person, viz.: ‘The individual substance of a rational nature’ ”. In Boethius, The Theological Tractates, trans. Stewart, H.F. and Rand, E.K. (Cambridge, Mass., 1968).

1 An earlier version of this paper was presented to the Locke Workshop, University of Alberta, Edmonton, October 3-5, 1975. I am particularly grateful to Professor John Yolton for the advice and encouragement he has offered throughout the course of this paper's development.

Locke on Persons and Personal Identity