Four Conclusions about Violence of the Left 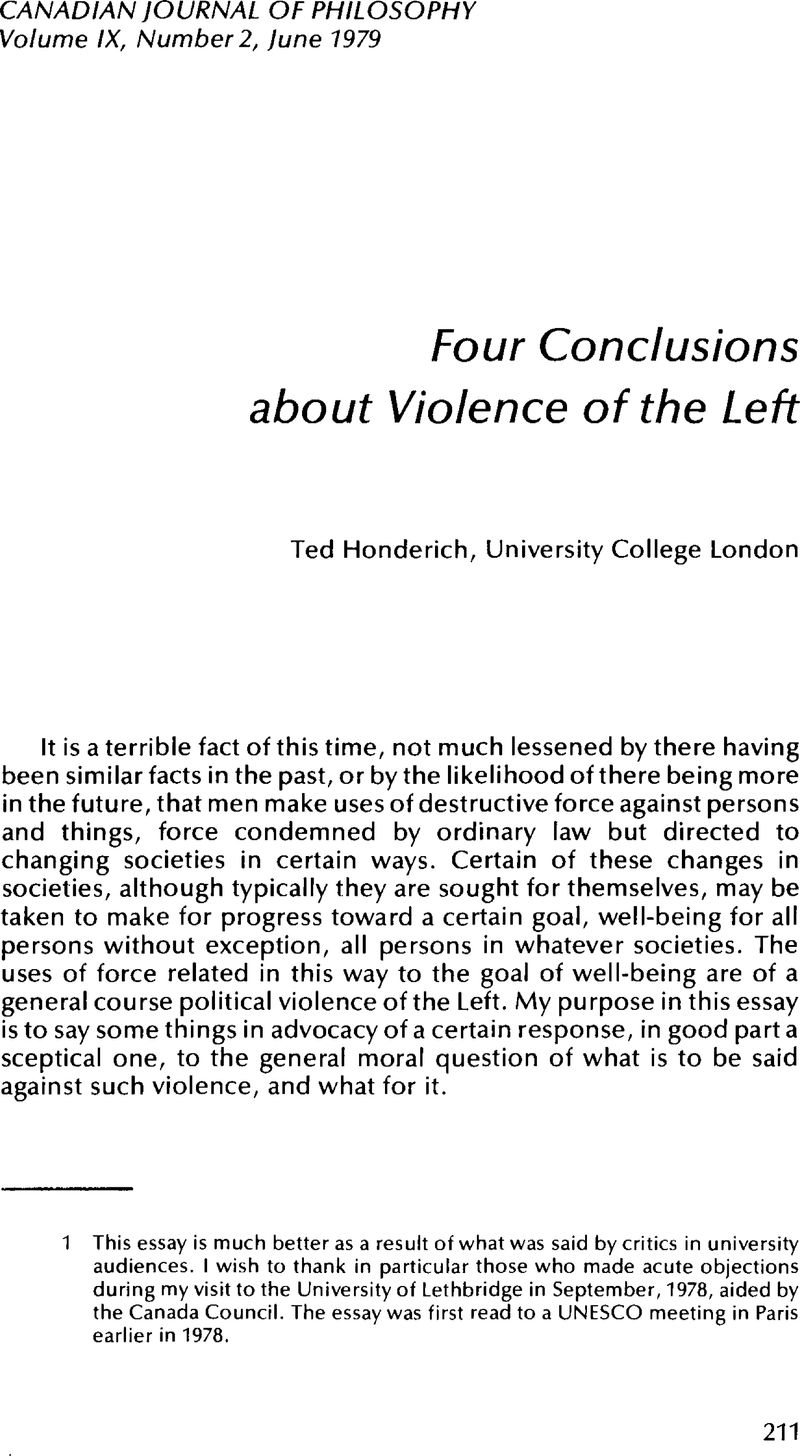 1 This essay is much better as a result of what was said by critics in university audiences. I wish to thank in particular those who made acute objections during my visit to the University of Lethbridge in September, 1978, aided by the Canada Council. The essay was first read to a UNESCO meeting in Paris earlier in 1978.

8 There are insuperable difficulties in trying to argue from these three considerations to the existence of an actual agreement, as distinct from a general expectation. To mention a less obvious one of these difficulties, the Agreement Argument presumably requires that the state or society make a uniform offer to all members of society, the same offer for each member. What is it? Is any uniform thing that can be found also substantial? Certainly we can find a far from uniform pattern in the actual provision of opportunities, protections, roles and so on to individuals by the state.

11 Stuart Hampshire, Morality and Pessimism, the Leslie Stephen Lecture, 1972 (Cambridge, 1972). Mr. Hampshire has not written substantially about political violence, but I have (since writing this essay) come upon a transcript of a television talk by him. (The New Review 2, no. 24 (March 1976)). He says in part:

… a moral rule against all assassinations for political reasons is needed, even though there will be very unusual and extreme circumstances in which an assassination in peace-time is justified. For example, if a group of prominent Germans had arranged the assassination of Hitler in August, 1939, with a view to making peace, it is my opinion that they would have acted rightly; the prolonged horrors and the vast cruelties avoided would have outweighed the evil example in this extreme and exceptional case. Moreover, he was already a multiple murderer. But I still think, from my own moral position, that one ought to be shocked by the idea of political assassination, and that there ought to be a strongly felt rule against it, in spite of these extreme, exceptional cases. One has to have moral rules, backed by moral feeling attached to the rules, even if in very exceptional circumstances, such as the Hitler one, it may be permissible to break the rule ….

… the straight, clear question in the title of this series ('Does a political cause ever give us the right to kill?’) deserves a straight, clear answer; or at least a fairly clear one, if the issue is too complex for complete clarity; yes, a political cause does sometimes give us the right to kill: in a war for the defence of one's country, but not in an unnecessary, unjust, undeclared, useless war, as in Vietnam. I will suggest the beginnings of a rough criterion for justified killing in very extreme situations in peacetime. Four conditions are necessary: first, that it is a response to a great injustice and oppression, as of a resistance movement against a foreign power ruling by force and terror so that the victim is the reverse of innocent; secondly, that it is certain that no lawful and non-violent means of remedying the injustice and oppression will be given: thirdly, that the political killing will certainly cause far less suffering, and less widespread suffering than the present injustice and cruelty are causing: lastly, that it really is very probable that the killing will end the oppression, and that it will not provoke more violence and more horror; this last condition is very rarely satisfied, but sometimes it may have been. These principles give the outline of a possible morality of political violence, though of course a highly disputable one.

12 Views and problems of this kind are admirably discussed by Glover, Jonathan in Causing Death and Saving Lives (Harmondsworth, 1977).

14 See my Violence For Equality: Inquiries in Political Philosophy (Hitarmonds worth, 1979)

20 In order to arrive at some guess as to the state of incomes twenty years from now, if an unprecedented change does not occur, let us again look to the past. The top tenth of British families, according to one calculation (H. F., Lydall, ‘The Long-Term Trend in the Size-Distribution of Income', Royal Statistical Society journal (1959), p. 14), received roughly these percentages of the total income after tax in the years in question:

During the same period, no doubt, there was some increase in the percentage income that was received by the one-tenth British families with the worst income. Given the record, and the calculation that the top tenth now receives about 25 percent of the total and the bottom tenth about 2 or 3 percent, it is a reasonable guess that in twenty years the top tenth of British families will receive something of the order of 15 percent of the income and the bottom tenth something like 5 percent.

In the United States, according to one calculation (Scoville, James G., (ed.), Perspectives on Poverty and Income Distribution (lexington, Mass., 1971, p.18), the best-paid and the worst-paid fifths (not tenths) of families received these percentages of total income in the years mentioned:

25 See my Violence For Equality: Inquiries in Political Philosophy, Ch. 4.

Four Conclusions about Violence of the Left