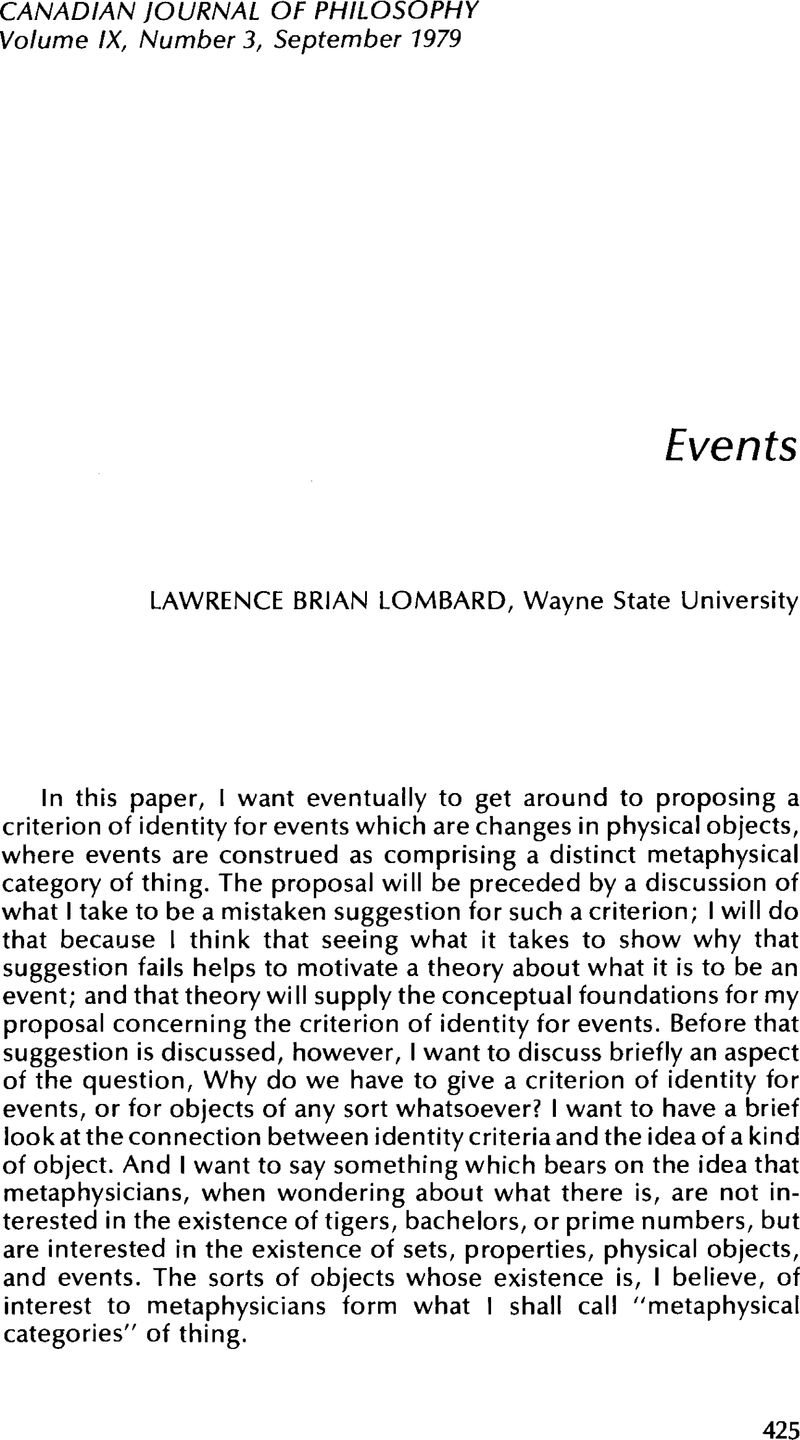 1 Several things should be said about (1). (a) I am not much concerned, here, with whether existence is a property. (1) can be read either as

because the latter commits one, on a natural interpretation, either to the view that all objects which exist exist in all possible worlds or to the view that objects have their essences in worlds in which those objects do not exist. To avoid confronting this issue, I adopt the weaker former over the latter (which implies the former).

2 Every property which is an essence, in my sense, will be an essential property in Plantinga's (except perhaps for existence, if it's a property at all), though not every essential property is an essence. Tautological properties, like being either green or non-green, are essences for me; but I don't mind that, for I am interested in what I shall call kinds and metaphysical categories; and those concepts will require the addition to (1) and (2) of condition (3), below, which will rule out tautological properties as being essences of kinds or metaphysical categories (if there is more than one kind of thing — and that I am, in this paper, taking for granted).

where the expressions of the form ‘R(x,y)’, ‘R’(x,y)’, ‘R”(x,y)’, etc. each give a criterion of identity for the abstract entities which are propositions, sets, properties, etc., respectively. Criteria of identity of the form displayed I wish to call “disjunctive”, and I mean to rule out any class of objects, as forming a metaphysical category of thing or a kind of thing, whose members can have nothing better than a disjunctive criterion of identity. Of course, an acceptable criterion of identity for a class having an essence ф must meet other conditions as well (e.g., it must not contain, after ‘if and only if’, the identity sign flanking terms whose references are фs), but non-disjunctiveness is the only one that really concerns me here.

5 A fourth possibility is that we've not been clever enough. This is different from the third case, for in this case, we might know perfectly well that we've got a kind on our hands and know what that kind's essence is, but Just not have been smart, lucky, or diligent enough to hit on the right criterion of identity. This possibility is, from a metaphysical point of view, uninteresting. And attacks on entities, based on Quine's dictum, when this possibility describes the actual state of the situation, are similarly uninteresting, though it might be difficult to say when that is the case.

11 I am excluding, here, changes such as coming into existence and going out of existence. And I would also like a restriction placed in the choice of properties such that it will not be the case that something changes Just because it has and then lacks a property the having and then lacking of which is Just what that object's persisting consists in. Also, it should be noted that not every object which is the subject of some change, according to the criterion of change Just employed, is ipso facto the subject of some event. This distinction is discussed in the appendix to this paper. But, so far as the main body of the paper is concerned, one should understand talk of changes as talk of events.

14 I want, here, to acknowledge my thanks to David Kaplan, for it was in discussion with him that the idea of a quality space in which things change arose. I do not know, however, whether or not he would approve of what I've done with this idea, or even how I have explicated it.

15 My thanks go to Alexander Rosenberg for this last observation which was made in the course of his comments on my paper, “Events and Quality Spaces”, read at the APA, Western Division, Meetings, 1 May 1976. The effects of this observation are felt in the second and third paragraphs of section V which were motivated by an example of Rosenberg's. Sections Ill and IV of this present paper are revisions of parts of my APA paper.

16 This and the previous paragraph might show what it is that is so plausible about, irrespective of the eventual outcome of, a criterion of identity for events given in terms of sameness of causes and effects.

17 The definitions which follow, particularly (D3), are motivated in addition by my interest in giving an account of events as the exemplifyings by objects of dynamic properties at times (which are intervals). This account comes in Section VI, and is ultimately motivated by my sketch in Section IV of the idea that events are movements through quality spaces by objects, where I take that idea to capture the idea that events are changes.

18 The objects which are to serve, in my view, as atomic are objects which are extended in time and have no temporal parts. Thus, when I speak of an object's exemplifying a property at a time (either an instant or an interval), I do not mean that some object, x-at-t, has timelessly some property P. Nor do I mean that the object, x, has the property of being P-at-t. I take ‘has the property P at t’ to express a two-place relation holding between objects and times.

19 The complication in (D3), which begins with (b), is needed because we will not want to say that two events, one consisting of a movement by an object from having Pi to having Pk “directly”, and one consisting of a movement by an object from having Pi to having Pj to having Pk, are two events of the same type. With the complication, we can have an atomic event which consists of an atomic object's movement from having Pi to having Pj to having Pk. But, if a movement is one such that if its subject passes through Pj in getting from having Pi to Pk. and it does so only contingently, then that movement cannot be atomic and must be construed as a sequence of atomic movements. One price which must be paid for this is that some atomic events will be construable as temporal sequences of atomic events as well. But with the complication, though it may be the case that some atomic events have atomic events among their parts, atomic events “of the same type” must always have exactly the same atomic event parts. As an example, no movement (in a flat two-dimensional space, say) from a point p1 to a point p2 can be atomic, if one instance of that “type” can be straight and another curved. The restriction (b) in (D3) makes the “directionality” (in general) of a movement (change) part of the essence of such movements (changes). The result of all this, as will be clear, is that some events may have more than one canonical description; this, however, will not imply that some events may have more than one essence, in the sense of ‘essence’ to be discussed. So, in what follows, I shall speak of the canonical description of an event; but, though some events can have more than one, this simplification will be harmless, since from a canonical description of an atomic event construed as a sequence we can, by consulting the relevant quality space, derive the canonical description of the event construed as not being a sequence. For if we know that an atomic event is being construed as a sequence, we know automatically what that sequence must be. The restriction in (D3) shows us that, for it shows that the only sequences which can be atomic events are those events which must (according toT) pass certain points in the quality space in getting from Pi to Pk.

23 See, for example, Kim's “Events and Their Descriptions”, in Essays in Honor of Carl G. Hempel, pp. 198-215, his “Events as Property Exemplifications”, in Action Theory, pp. 159-77, and Goldman's A Theory of Human Action (Englewood Cliffs: Prentice-Hall, 1970). It might be noted here that my canonical descriptions cannot be descriptions of states, but only of events. I am inclined not to lump events and states into one category of thing, since, it seems to me, there are important differences between events and states, and I don't see any overriding motive for ignoring those differences. But this is not the place to go into this issue.

24 It is, of course, to be understood here that what is contingent or not must be relativized to the theory against the background of which events are given their canonical descriptions.

26 Of course, two or more events of the same type which are not atomic could occur simultaneously; but for that to be the case, at least some of their atomic constituents must be different.

28 I am not especially concerned here with the fact that ‘x ф ed at t’ is general with respect to фings by x at t, while ‘x's exemplifying ф at t occurred’ is not.

34 See my just cited paper for the suggestion, and Kim's for the reasons.

35 In “Events and Quality Spaces”.

37 I would like to express my gratitude to Michael McKinsey with whom I spent a great deal of time (a lot of his patience) talking about the issues discussed in this paper. He made some very valuable suggestions (especially in section I, but elsewhere as well), and tried to make me less muddled. I am certain that his suggestions were valuable; but I am not certain that he succeeded in making me less muddled, though that was not his fault. And my thanks also go to Lawrence Powers for some helpful suggestions. I am also indebted to the editors and referees at the Canadian Journal of Philosophy whose suggestions and criticisms forced me to make this paper better than it would otherwise have been. I am, of course, solely responsible for what is in this paper.