A Change in Manner: Hume's Scepticism in the Treatise and the first Enquiry 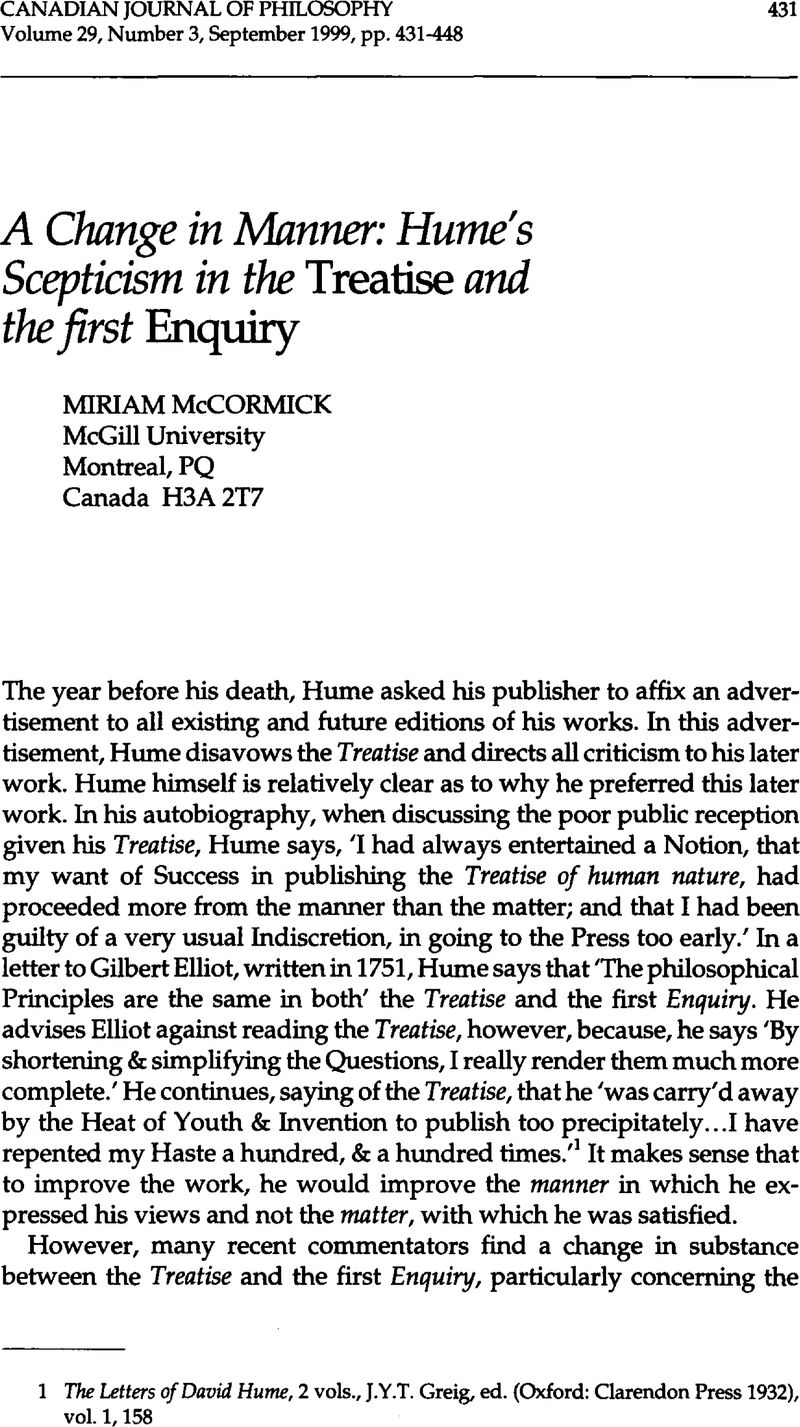 2 Popkin, Richard H. ‘David Hume: His Pyrrhonism and His Critique of Pyrrhonism.’ References to this paper are from The High Road to Pyrrhonism, Watson, Richard A. and Force, James E. eds. (San Diego: Austin Hill Press 1980), 103–132.

3 Penelhum, TerenceGod and Skepticism: A Study in Skepticism and Fideism (Dordrecht: D. Reidel 1983), 124-7. In his David Hume, An Introduction to His Philosophical System (Purdue: Purdue University Press 1992), he says that the sceptic of the Treatise’ copes with his anxieties by being Pyrrhonian and dogmatic by turns, and alternating his activities.'

6 Those who agree that there is no substantial difference between the two works tend to argue that Hume is less sceptical than I think he is. For example, in ‘Hume's Academic Scepticism: A Reappraisal of his Philosophy of Human Understanding,’ Canadian Journal of Philosophy 16 (1986) 407-35, John P. Wright argues that Hume is committed to a realist ontology. He says that ‘the scepticism which Hume himself adopted requires a commitment to an objective world’ (411) and that ‘whatever we might mean by calling Hume a sceptic, this does not mean that he is agnostic regarding our fundamental ontological suppositions’ (416). Wright argues that Hume has these realist commitments in both the Treatise and the first Enquiry. Although I do not think Hume denies the existence of an objective world or tries to undermine our fundamental suppositions, his scepticism does commit him to being open to the possibility that these suppositions can be questioned and may turn out to be false. Although they must be accepted if any action and inquiry is to be possible, this does not mean we can know that they are true.

7 Hume, DavidA Treatise of Human Nature, Selby-Bigge, L.A. and Nidditch, P.H. eds. (Oxford: Clarendon Press 1978), 183. Hereafter cited in text as T. When I refer to ‘radical,’ ‘excessive,’ or ‘total’ scepticism, I am referring to the position that Hume attributes (probably unfairly) to a fantastic sect, namely, the Pyrrhonians.

8 Livingston, Donald has pointed out that the extreme sceptical doubt Hume describes is only one stage in the philosophical reflection that leads to the adoption of Hume's ‘true philosophy.’ He says the ‘Pyrrhonian arguments are a necessary stage in the natural history of philosophical reflection from vulgar thought through false philosophy to philosophy that is true’ (Hume's Philosophy of Common Life [Chicago: University of Chicago Press 1984], 27-8). Livingston, has recently pointed out that many readers have made the ‘error of confusing a moment in the dialectic with its final result’ (Philosophical Melancholy and Delirium [Chicago: University of Chicago Press 1998], 147).

9 ‘Belief in distinct and continued existence’ and ‘belief in body’ mean the same thing. I shall often use the second locution for brevity.

Hume uses ‘reason’ in several ways in the Treatise, and it is not always clear in which sense he is using it. Norton identifies seven principal senses in which Hume uses the term. See his discussion for further details on these various uses in David Hume: Common-Sense Moralist, Sceptical Metaphysician (Princeton: Princeton University Press 1982) 97-8.

12 Hume says that the supposition that there is a connection between our perceptions and some external object is ‘without any foundation in reasoning.’ He rejects Descartes’ appeal to God's undeceitful nature as evidence that external objects do exist. Hume argues that to refer to the ‘veracity of the supreme Being’ to prove the existence of objects ‘is surely making a very unexpected circuit’ (ECHU 153). For how can we prove the existence of God or any of his attributes once we have called into question the existence of the external world? We could not base any arguments to prove His existence on what we see around us, for we are doubting that there is anything around us. To rely on God's veracity is to beg the question at issue: are there existences external to the mind?

14 An earlier version of this paper was read at the 22nd international Hume conference in Park City, Utah. I am greatly indebted to David Norton for his many comments and suggestions.

A Change in Manner: Hume's Scepticism in the Treatise and the first Enquiry