Can Serious Rights Be Taken Seriously? 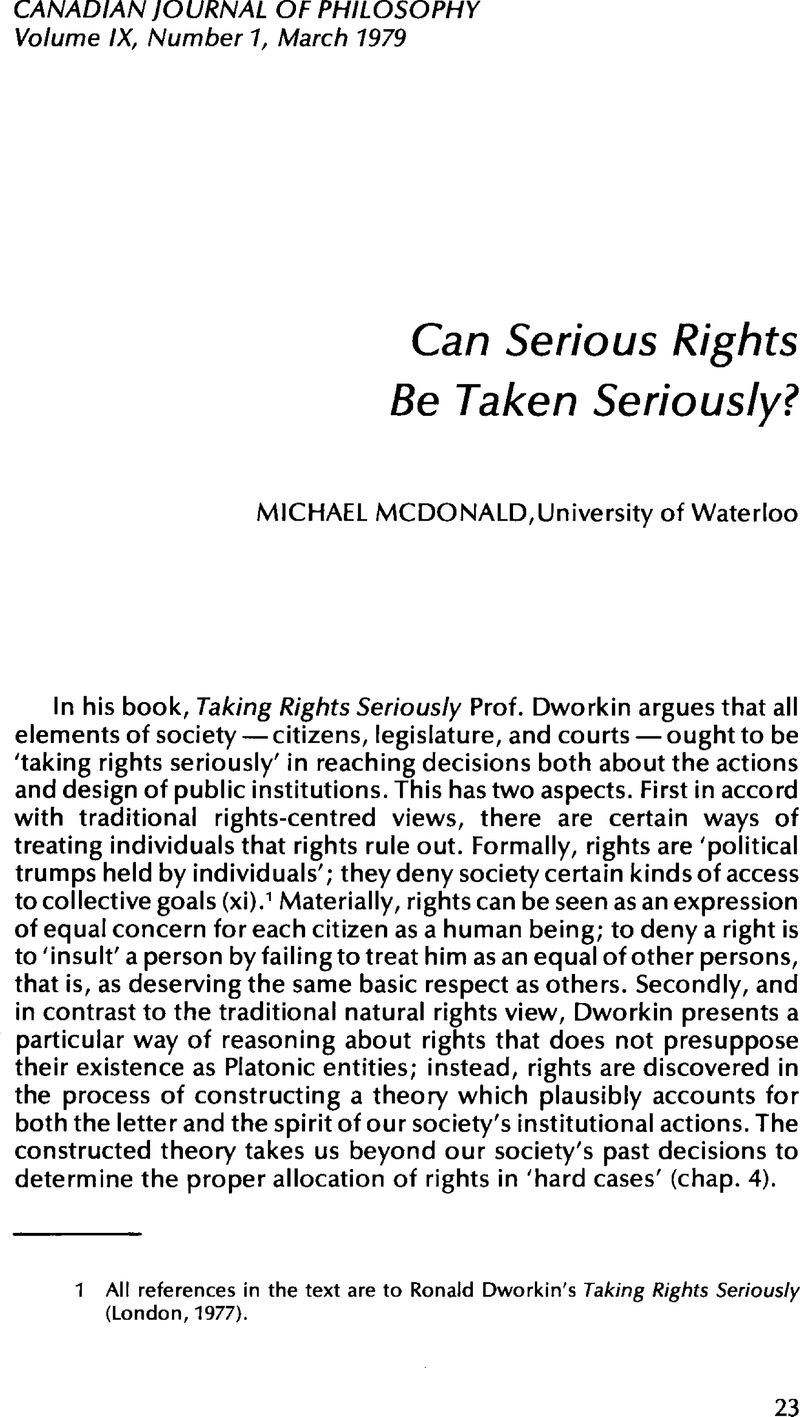 1 All references in the text are to Dworkin's, RonaldTaking Rights Seriously (London, 1977).

2 I am not here concerned with sentencing policies; Dworkin allows that such policies are directed by considerations of the collective welfare.

3 Nothing hangs on the particular example. The policy could specify all large livestock producers or the first 1000 hog producers to apply for aid. My point is the policy includes rules for its application. The rules are treated like principles then.

5 This interpretation is suggested by Dworkin's remark that officials must meet the conditions of ‘articulated consistency’ (162).

6 The result is one described in Bernard Williams's ‘Moral Relativism’, Proceedings of the Aristotelian Society (1974-75). Williams, I think, welcomes this relativism. However, defenders of Rawls should find it disturbing, for it is .in principle possible that for a given community there may be no Just decision procedure. One possibility I have not discussed here is that the notion of ‘a community’ be analysed in terms of ‘agreement on moral and political argumentation’. This is an analysis that Dworkin seems to reject at the beginning of his review of Rawls (pp. 150–59).

7 On page 184, Dworkin says: “The concept of rights against the Government, has its most natural use when a political society is divided, and appeals to cooperation or a common goal are pointless.” The reverse could Just as plausibly be argued, viz. that appeals to common goals and cooperation are most useful when there is not agreement about rights. Indeed, this seems to be the situation described in the contractarian ‘state of nature’, although as I said in the previous note Dworkin rejects this interpretation of the original position.

8 In this essay, Dworkin is concerned with determining what counts as ‘social morality’ or ‘the morality of the community’. This might be contrasted with ‘institutional morality’. But clearly the former cannot be unrelated to the latter both for practical reasons (a government which ignored widely held convictions would be unlikely to stay in power long) and for moral reasons (the only alternative is a ‘morality of officials’).

9 The question here is not to determine what we believe to be moral but whether we are correct in so thinking.

10 like Hare, I am very worried about theories of moral reasoning based on ‘intuition’. See Hare's, ‘Abortion and the Golden Rule’, Philosophy and Public Affairs 4 (1975). I am even more concerned about using intuitions to support political morality. I would argue that Dworkin has misinterpreted the Rawlsian original position. Its purpose is not to appeal to our intuitions about rights; rather it is an, I believe failed, attempt, to provide an account of rationality. Such an account is indispensible in my view to providing an adequate account of moral reasoning.

11 A different interpretation of the passage in question might be suggested by the paragraph which immediately precedes it. There Dworkin says that ‘Chapter 12 … shows how the idea of a collective goal may itself be derived from that fundamental right (to concern and respect)’. Instead of needs-based rights theory, this would mean Dworkin has a rights-based needs-theory, so that ‘I need X’ entails ‘I have a right to X’. Aside from the implausibility of such an entailment, it makes Dworkin's whole position rest on his defence of the claim that there is a basic right to concern and respect. That defence is examined in the following section.

13 Dworkin could of course argue that the egalitarian right is implied by the fundamental right plus some other premiss (perhaps, the needs hypothesis). This would represent a (perhaps, not unwelcome) break with historical liberalism's anti-egalitarian stance. To make this plausible, Dworkin would still have to deal with a number of other issues, e.g. whether or not this implies the difference principle, average utilitarianism, or something else.

16 Here, I am largely following Nozick, in chap. 3 of his Anarchy, State, and Utopia (New York, 1974); Nozick in turn follows Locke. There is a similar move in Kant, but without all the libertarian conclusions.

17 I have argued that the right to treatment as an equal cannot ground the substantive rights Dworkin claims it does because it is either a purely formal right or it is an, as yet unspecified, substantive right which does not have the generality Dworkin claims for it. The latter has been supported by mentioning three incompatible instantiations (Kant's, Locke's and Marx's) of the notion of human dignity. It may be suggested that the three examples, and others that might be given, may have enough in common to the Job Dworkin wishes, that is, to provide a substantive right of great generality which can ground constructions of legal and moral rights across diverse political systems. I still think the result is unsatisfactory because it isn't clear that such a right is other than purely formal. It might be claimed, for example, that the common feature of a respect-for-person's position is that it would rule out caste systems. But in reply we need only imagine what Marx would say about Nozick's notion of historical entitlement. Even if there is some common feature, it is likely to be so slight that scarcely anything (or worse yet, almost anything) can be built upon it.

18 I think a utilitarian would have trouble with one part of Dworkin's expression of that view, viz. that each person's ‘views’ or opinions are to be accorded equal respect. Surely one's views about one's own or other persons’ utilities may be mistaken and should not be used in determining that other person's interest.

19 This paper was read to a group of philosophers at Oxford in May 1977. I wish to especially thank Mr. Parfit (All Souls), Prof. Narveson (Waterloo) and Prof. Dworkin for their critical comments. The views expressed in this paper are entirely my own responsibility.

Can Serious Rights Be Taken Seriously?