Are Thought Experiments Just What You Thought? 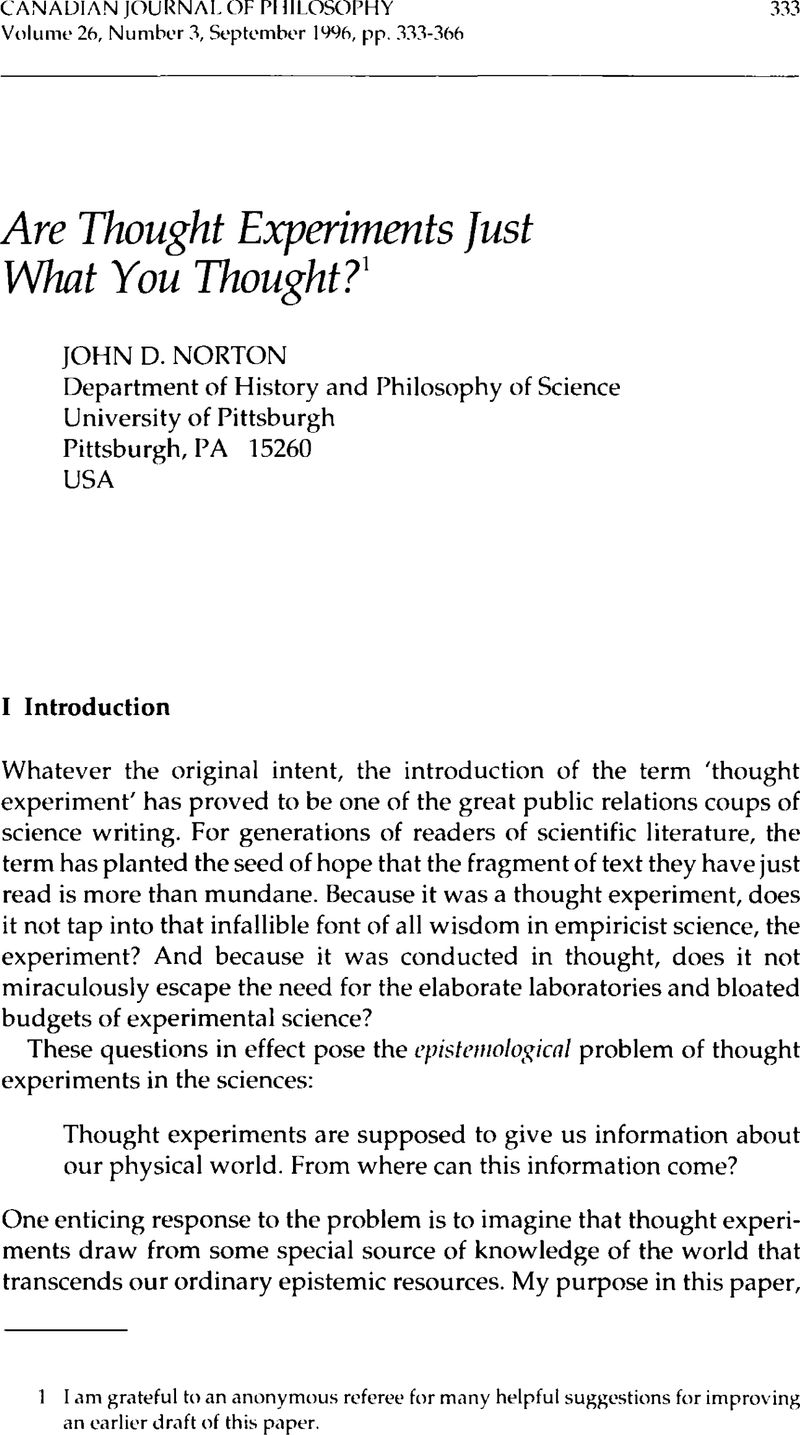 I am grateful to an anonymous referee for many helpful suggestions for improving an earlier draft of this paper.

I am grateful to an anonymous referee for many helpful suggestions for improving an earlier draft of this paper.

3 For example, Gooding, D.Experiment and the Making of Meaning (Dordrecht: Kluwer 1990); ‘What's Experimental about Thought Experiments?’ in Hull, D.Forbes, M. and Okruhlik, K. eds., PSA 1992: Proceedings of the 1992 Biennial Meeting of the philosophy of Science Association. Volume 2. (East Lansing, Ml: Philosophy of Science’ Association 1993), 280-90; Sorensen, R.Thought Experiments (Oxford: Oxford University Press 1992); Nersessian, N. ‘In the Theoretician's Laboratory: Thought Experimenting as Mental Modelling,’ in Hull, Forbes, and Okruhlik, 291–301; as well as the many papers collected in Horowitz and Massey.

11 Laboratory of the Mind, 46-8; ‘Why Empiricism Won't Work.’ Brown also argues in ‘Why Empiricism Won't Work’ that a goal of a thought experiment can be to produce understanding rather than novel conclusions. He points out that this goal is not incorporated in my account, and he is right. It is not. Yet I do not see that he has established that there is any incompatibility between my account of thought experiments as arguments and the possibility that thought experiments may aid understanding. Indeed, it is the practitioners’ lore in the mathematical sciences that one does not really understand this or that comer of some science until one has put sweaty hours into deriving results within it, even if one already knows the results. This is a clear instance of understanding being enhanced by the execution of arguments (derivations) to already known conclusions. To pursue the matter any further would require a more precise notion of ‘understanding’ than Brown or I have offered.

12 The fourth example is not actually a thought experiment in the natural sciences. It is a device closely related to thought experiments through which Brown proposes we can perceive mathematical laws of objects of the Platonic realm.

13 Laboratory of the Mind, viii

15 Indeed the suggestion is so strong that Salviati's description of the thought experiment as a ‘short and conclusive demonstration’ ('breve e concludente dimonstrazione’) is translated as ‘short and conclusive argument’ in the H. Crew and A. de Salvio translation (Macmillan 1914; Dover 1954), 62. The non-technical ‘dimonstrazione’ can mean the more technical ‘argument’ but also can mean other means of establishing a result, such as through physical models, so that the translation as ‘demonstration’ is more literal. I suspect, however, that ‘argument’ captures the overall intent of the author better. (I thank Peter Machamer for assistance with Italian here.)

18 ‘Why Empiricism Won't Work.’ See also: ‘Galileo's new theory is not logically deduced from old data. Nor is it any kind of logical truth.’ ‘The transition from Aristotle's to Galileo's theory is not just a case of making the simplest overall adjustment to the old theory’ (Laboratory of the Mind, 78).

21 Clearly the argument 1-8 can no longer be generalized to yield Galileo's theory. If the slower body is a weight of thin gold leaf fashioned into a parachute, then it will slow the fall of a faster nugget. The composite will fall at some intermediate speed. There is no contradiction since the composite need not fall at the greater speed of a nugget of weight equal to that of the composite, for the two differ in shape.

26 I have reconstructed this thought experiment elsewhere; see ibid., §3.2.

29 Newton, I.Mathematical Principles of Natural Philosophy, Cajori, F. trans. (Berkeley: University of California Press 1934), 10. Rob Rynasiewicz has recently argued persuasively that even this meaning misconstrues Newton's true purpose. His goal was not to show that absolute motion can be distinguished observationally from relative motion, but that the meaning of absolute motion is such that it cannot be defined in terms of relative motions. This alternative reading can readily be accommodated in the argument view of thought experiments. ‘By their properties, causes and effects: Newton's scholium on time, space, place and motion: The text (Part 1); the context (Part 2).’ (Studies in History and Philosophy of Science 26 [1995], 133 n.1; 295n. 2).

30 Newton does mention that he has actually experienced at least some of the phenomena he describes, so it may not be a thought experiment at all!

31 Einstein is the champion of this alternative reading. Mach's relationship to it proves surprisingly difficult to disentangle. See my ‘Mach's Principle before Einstein,’ in Barbour, J. and Pfister, H. eds., Mach's Principle: From Newton's Bucket to Quantum Gravity: Einstein Studies, vol. 6 (Boston: Birkhäuser 1995) 9–57.

34 As, for example, by Feynman, Richard; see Laboratory of the Mind, 6.

40 For a historical account of a series of lesser known thought experiments in gravitation theory, see Norton, J.D. ‘Einstein and Nordström: Some Lesser Known Thought Experiment in Gravitation,’ in Earman, J.Janssen, M. and Norton, J.D. eds., The Attraction of Gravitation: New Studies in History of General Relativity (Boston: Birkhäuser 1993) 3–29.

41 From his brief remarks on 83, I take it that Peter Upton is attracted to this possibility. See Lipton, P. Review of Thought Experiments in Science and Philosophy, Horowitz, T. and Massey, G. J. eds. Ratio New Series 6 (1993) 82-6.

43 ‘Seeing the Laws of Nature’

45 Our lack of understanding here is stressed by Brown,’ Author's Response,’ 39. For the reasons given above, I am also unmoved by Brown's suggestion that the disanalogy between ordinary and Platonic perception somehow depends on attaining a scientific understanding of ordinary perception.

46 ‘History and Demonstrations Concerning Sunspots and Their Phenomena’ (‘Letters on Sunspots’) in Discoveries and Opinions of Galileo, Drake, S. trans. (Garden City, NY: Doubleday Anchor 1957), 87–144 on 101

47 Ironically, Galileo condemned others for misreading this imperfect image that ‘results from the imperfections of the telescope or the eye of the observer’ (101-2). Galileo, however, with his ‘excellent instrument,’ is sure the bulges are really two stars distinct from the body of Saturn.

48 Since Brown nowhere gives an account of the latter mechanism, I accept his tacit admission in Laboratory of the Mind that the process is mysterious ( 65). He also argues that this should not worry us since the final link from eye to conscious belief of ordinary perception is equally mysterious. I do not accept this defense, since this final link in ordinary perception is controllable by many regularities, unlike Platonic perception.

49 These thought experiments might well be Platonic since they do destroy an older theory (that the earth moves) and simultaneously generate the new one (that the earth is at rest).

52 Brown classifies the Newton's bucket thought experiment as a ‘conjectural thought experiment.’ The Einstein-Mach reanalysis might count as Platonic, since it destroys the older theory (Newton's absolute space) and simultaneously generates a new one (inertia is due to an interaction with distant masses).

56 But how do we rule out the possibility that the closer communing with the laws of just such a peek is exactly what is needed to facilitate the drawing of the conclusion? Again, in the case of a conjectural thought experiment, whose outcome is the conjecturing of a new hypothesis, how can we rule out the possibility that the conjecture was triggered by a glimpse into the Platonic world?

57 For a critical analysis of this proposal, see my review ‘Seeing the Laws of Nature.’

58 This escape was suggested by an anonymous referee of an earlier draft of this paper.

59 In my ‘Thought Experiments in Einstein's Work; §III.

1 I am grateful to an anonymous referee for many helpful suggestions for improving an earlier draft of this paper.

Are Thought Experiments Just What You Thought?