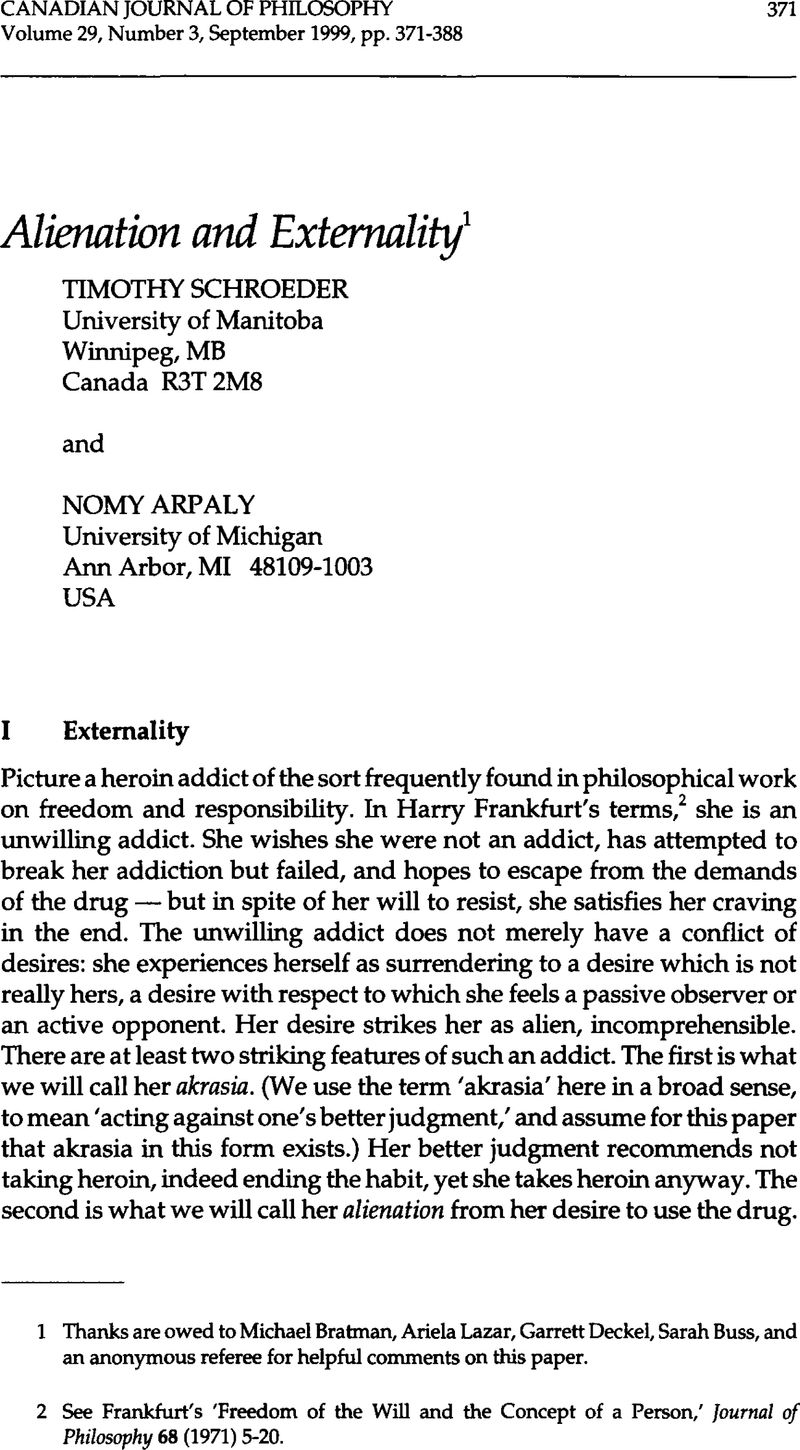 Thanks are owed to Michael Bratman, Ariela Lazar, Garrett Deckel, Sarah Buss, and an anonymous referee for helpful comments on this paper.

Thanks are owed to Michael Bratman, Ariela Lazar, Garrett Deckel, Sarah Buss, and an anonymous referee for helpful comments on this paper.

3 In this paper, we take no position on just what the will is. Frankfurt takes the will to be an effective first-order desire, and this conception will serve for present purposes.

4 In Rorty, A. ed., The Identities of Persons (Berkeley: University of California Press 1976).

5 For ease of reference, all page references to Frankfurt's original papers will be followed by page references to those papers as reprinted in The Importance of What We Care About: Philosophical essays (New York: Cambridge University Press 1988).

8 In ‘Freedom of the Will’ Frankfurt does not make any explicit claims about the nature of externality, but ‘Identification and Externality’ appears to regard the earlier work as having been committed to this view.

9 The reader is warned again that, in this paper, we use ‘akrasia’ simply to mean ‘acting against one's better judgment,’ and do not hold that one must act freely or have free will in order for one to be akratic. It may strike the reader that, according to ‘Freedom of the Will’ it is all but impossible to commit an akratic action of one's own free will. This is a feature of Frankfurt's early work which does not appear in the most recent theories.

10 Watson's ‘Free Action and Free Will’ comes to the same conclusion through considering a similar sort of case.

13 In the papers we cite, Frankfurt alludes to the possibility of analyzing weakness of will in terms of external desires only once, in passing. See The Importance of What We Care About, 165.

14 Given some plausible connections between the structure of one's desires and one's best judgments, as just mentioned.

17 It has been suggested to us that William surely experiences his desire to spank as an intrusion or compulsion of some sort when it interferes with what he is committed to doing, but we cannot agree. Of course, that is one possible scenario, but our own experience with actors like William suggests that it is equally possible that William sees his angry desires as fully his own. He may be frustrated with himself (after the fact) for spanking his children, even remorseful. But the idea that sin is the lot of humankind, while freedom from sin comes only as a gift from God, is an idea which has a wide appeal, and a person like William holding such a view is unlikely to look upon what he takes to be his sinful acts with a feeling of compulsion or intrusion, for they are an expression of who he is (when he neglects to give his will over to God). Some people no doubt experience every instance of obviously self-frustrating behavior as an intrusion or compulsion, but some do not. Consider the people inhabiting Dostoevsky's novels (for example, Lebedyev in The Idiot) who are constantly frustrated with themselves but are also deeply immersed in a visceral sense of themselves, and humanity in general, as both loathsome and pathetically weak-willed. Confronted with an urge to do what he regards as unacceptable, Lebedyev may feel miserable, but it is only natural that he does not experience the same sense of alienation or violation as a man who earnestly believes that he is ‘the captain of his soul.’

19 It should also be noted that, while one can come to be alienated from former psychological states, it would be equally odd to say that these become external states retroactively. One may feel alienated from the desires of one's youth without those desires becoming external. Hence, externality is a limited subspecies of alienation: those psychological states from which one is alienated at the time of having them are the external states. Further complications could be addressed — e.g. lasting desires from which one sometimes feels alienated and other times not — but we suspect that they would have little bearing on the overall character of the view we are presenting.

20 Compare this to David Velleman's claim that to exercise free will it is necessary to take the action which matches one's expectations of what one was going to do. See Velleman, J.Practical Reflection (Princeton, NJ: Princeton University Press 1989).

22 One might take the inordinate explosion of 12-step programs for all imaginable habitual personal problems as evidence of this.

23 There is some evidence that strange desires, incorporated into the visceral self-image, can lose their alienating power. Oliver Sacks presents a fascinating case history of a Tourettic man, whose life is filled with compulsions, tics, and sudden unwanted actions, who seems almost entirely at ease with himself, and who experiences remarkably little alienation from his odd urges. It is interesting to compare a case like this to cases of many obsessive-compulsives, whose alienation from their tics and compulsive actions never decreases. See Sacks, O.An Anthropologist on Mars: Seven paradoxical tales (New York: Knopf 1995) 77–107.

1 Thanks are owed to Michael Bratman, Ariela Lazar, Garrett Deckel, Sarah Buss, and an anonymous referee for helpful comments on this paper.