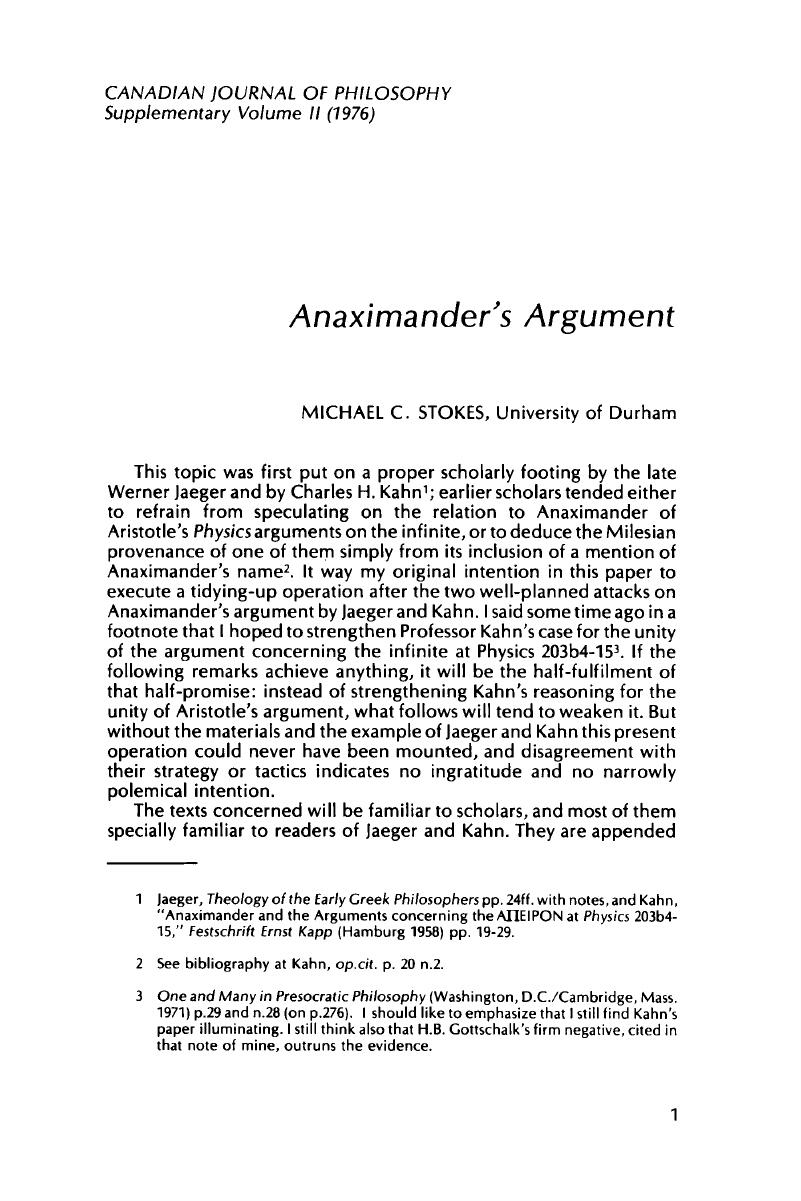 3 One and Many in Presocratic Philosophy (Washington, D.C./Cambridge, Mass. 1971) p.29 and n.28 (on p.276). I should like to emphasize that I still find Kahn's paper illuminating. I still think also that H. B. Gottschalk's firm negative, cited in that note of mine, outruns the evidence.

9 This is not an attack on others but a mea culpa. At One and Many p.30 (cf. p.63 first para. fin.) I was rash enough to write concerning the present passage as follows:— ‘Aristotle has evidently assimilated Anaximander's άρχή to his own kind of άρχή. and does not notice the difference between them, or at least does not think it worth while to point out the difference to his audience or readers'. Much of this I am now obliged to recant. but I am wholly unrepentant of the main conclusions reached in my chapter on the Milesians. In Physics 203b4-15 Aristotle did indeed distinguish in his own mind Anaximander's type of άρχή and his own. but his manner of writing leaves the matter unclear to his readers; whence his commentators’ criticisms, and the difficulty (visible in my translation's parentheses) in choosing between ‘beginning’ and ‘principle’ as renderings of άρχή at certain places in his argument. In this connection Aristotle's expression ὼς άρχή τις ούσα is of some interest. The addition of τις is not to be ignored as a piece of careless writing; τις here means ‘a sort of'. and the phrasing is notably cautious. Indeed it looks suspiciously like fudging. The differences between the two kinds of άρχή are more concealed than emphasized by it, despite its formal correctness. It looks as though Aristotle is not perfectly clear in his own mind, and this leaves open the possibility of his having been misled elsewhere over the word άρχή. The distinctions in Metaphysics ∆1 are by no means an insuperable bar: it is perfectly possible for even a thinker of distinction to be cloudy in one place over what is clear in another. especially if he is not philosophizing expressly on his own account, as Aristotle is not in this part of the Physics. Though it can no longer be urged that Aristotle makes a definite error over άρχή here. the possibility of error elsewhere is left open; but I have to admit its weakening. It still seems to me that if Aristotle were to bring the Milesian άρχή into his own scheme of four causes it could hardly have been as anything but the material cause in the case of Thales’ water and Anaximenes’ air, and Anaximander's ‘infinite’ was too easily assimilable to these. Clearly Aristotle rejected the notion of putting one or more of them under the head of efficient or moving cause, despite Plato's phrase in the Phaedrus άρχή τῆς ϰιυήσεως and despite Aristotle's own phrase ϰαὶ πάυτα ϰυβερυᾶυ: this perhaps because of a reluctance to allow for self-motion as a belief of thinkers before Plato. Hylozoism is conspicuously not an Aristotelian word. If not an efficient cause. the Milesian άρχή was all the more liable to representation as a material cause. The general historical reasons for supposing Aristotle mistaken about the Milesian άρχή, expounded in the relevant chapter of my book, remain, in my opinion, unshaken.

14 I refer to the argument that over infinite time any possibility will be actualized. especially at de Caelo 281b21ff.; for Plato any motion other than self-motion could (logically could) cease.

18 One and Many (above n.3) p.73 with nn. Conceivably the notion was derived from Hesiod's Theogony; see M.L. West's commentary on Theogony 740, and Stokes, at Phronesis 7 (1962) pp.25-33 and 8 (1963) p.23. West rightly says that a bottomless chasm contradicts Theogony 814 unless chaos there and chasm at 740 are different; but it remains far from clear how much or how little contradiction one can attribute to Hesiod or how authentic are lines 807-819. West's arguments for the genuineness of 807-819 at the expense of 734-743 are unconvincing; e.g. to find the jailers at 734-5 is not analogous to finding lions and hunters in adjacent cages. but rather to finding both lions and keepers in the same zoo. On the πηγαί at 738 West speaks of this metaphor “redressing the balance” after the inadequate root-metaphor of 728, but fails (in my judgment) to consider closely enough what the metaphor actually signifies. It need not signify the same as the root-metaphor. I would add only that even if (as I do not believe) the πηγαί are other than cosmogonical, there would remain the possibility that the early philosophers thought they were cosmogonical.

19 The primacy of the spatial use was argued by Classen, C.J., Hermes 90 (1962) p.163 on linguistic grounds. As for infinity if one admits that Anaximander believed in a true temporal infinite (as opposed to “indefinite“) then objections to a true spatial infinite surely fall to the ground?

24 Cf. Kirk, G.S.Classical Quarterly 5 (1955) p. 35 n.1 and Babut op.cit. (n.20) p.12.1t needs to be added that δοϰεῖ constitutes neither an acknowledgment of the figurative and purely symbolic use of ϰυβερυᾶυ (Babut p.13) nor (Classen p. 168) an expression of a personal conjecture of Aristotle's own, but must mean in context “is thought”, sc. by the thinker(s) on whom Aristotle is drawing. Otherwise διό is incorrect, since Aristotle offers reason only for the physicists holding that the infinite is an ἀρχή etc.

32 Kahn, op.cit. p.29 is much more positive than the evidence warrants. Whether or not Thales’ geometry is in general adequately supported by the ancient evidence, it is not demonstrable that he produced consecutive and clearly set out proofs. But this is admittedly too large a question to be settled here.

33 I am much obliged to Dr. D. Bargrave-Weaver and Mr. K.W. Mills for reading and helpfully criticizing early drafts of this paper; my thanks are also due to my friendly critics at the Edmonton Workshop, and specially to Prof. Roger A. Shiner, whose written and oral criticisms compelled the modification, clarification and enlargement of the original paper. The revised version was heard and usefully questioned by the group of ancient philosophers in the Universities of Newcastle and Durham. My gratitude to all leaves me nevertheless with the whole responsibility for the paper's faults.